The end of the FIFA World Cup has me reflecting just how often these global sporting events come at a big cost to the cities that host them. In particular, urban renewal, housing and jobs promises are early causalities. There are many examples to prove the point in the excellent research of Dr Andrew Smith from the University of Westminster’s Faculty of Architecture and the Built Environment.

A big part of the problem is that the community-focused activities come at the tail end of major sporting events. Just when it is time for authorities to transform athlete villages into housing or stadiums to local sporting fields, the energy, will and funding suddenly evaporate.

An answer at hand

This makes me think there is a simple solution, and it is one that is happening right under the nose of the residents of Adelaide: start the renewal projects before the events are held!

Instead of doing everything required from a sports point of view, and then building the associated urban renewal projects, it may be more appropriate to start the renewal of those areas and use the sporting event as a major impetus to add to or complete them.

Adelaide is undergoing a substantial urban renewal program as it weighs up making a bid for the 2030 Commonwealth Games.

A vibrant new sporting stadium close to the CBD, a new traffic and transport plan already underway, and the redevelopment of brownfield sites, such as Bowden Urban Village are just three examples.

A call for change in event decision-making

Event organisers typically award events on the basis of the city with the most spectacular plans. The resources and capacity to achieve them comes second. Dubai’s bid for the World Cup, in a city without any sporting stadiums, is a case in point.

What if organisers changed the way they make decisions?

I propose that event organisers look for:
Let’s face it: if event organisers reorder their priorities, Adelaide’s bid would be well ahead. As a resident and an architect, I’d welcome such a shot in the arm for “brand Adelaide”.

Self-interest aside, however, I think that outcome is fair enough. Adelaide’s commitment to doing the work, regardless of whether it bids for, or wins, the games, should put it ahead.

By rewarding Adelaide, we’ll encourage other city authorities to act first, bid later, and the long run of broken promises will, I hope, come to an end.

David is practice director of Hames Sharley’s Adelaide office and holds multiple national portfolio leadership roles within the company. David is a registered architect in many states and territories within Australia and has lead architecture, urban design and interior design projects, both large and small for public and private sector based clients. He is a passionate communicator and enjoys all levels of collaboration involved in design projects. David has been a board member of the Rundle Mall Management Authority since 2012, a panel member of the City of Prospect’s Development Assessment Panel since 2011 and recently appointed to the Inner Metropolitan Development Assessment Committee. He also holds positions on the executive committee of Mainstreet SA and has been treasurer of the Property Council of Australia SA Division since 2011. 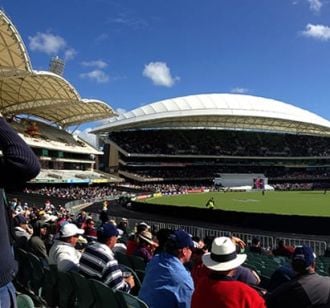