Going up not out

While there has been little need for vertical (or high rise) schools in Australia in the past given our love of open space, they have long been an effective platform for education in densely populated urban cities around the world.

He writes that St Andrew’s Cathedral School has been operating from high-rise buildings in Sydney’s CBD for over 20 years, with other schools such as St Georges Anglican Grammar in Perth now going vertical, and Lourdes Hill College developing “upward instead of outward”.

“Population growth, urban densification and infill, land rezoning, land values, demographic shifts and decades of school closure and consolidation are all factors influencing the need for new thinking about educational architecture in our cities.

“With Sydney’s population already nearing 5 million and projections that it will grow to 6 million people over the next 10 years, it’s no surprise that the New South Wales Government is focussed on infrastructure that will support population growth and unlock greater density,” James said.

As part of their leadership in new thinking, Hames Sharley hosted The Property Leaders Sydney launch event on October 8, which focussed on the evolution of vertical schools around the world and how compact high rise schools can play a key part in the future development of our cities.

“The value of schools in our cities cannot be underestimated, and 21st-century schools need to be adaptable to meet future demands,” James said.

“In an ideal world schools would own their buildings and lease unused floors until they expand and fill them, but this isn’t always the most viable solution, as it relies on access to substantial capital at the outset.”

He writes that the utilisation of shared spaces is also a key consideration for all future schools.

“The smartest vertical schools make use of shared facilities such as auditoriums, gyms and pools, ovals, and even classrooms,” James said.

“St Andrew’s Cathedral School takes advantage of its CBD location by using a neighbouring cathedral as its auditorium, the city’s museum and library for learning spaces, and the University of Sydney for its playing fields.

“Conversely, the University can use the school’s classrooms for evening lectures and tutorials – this means capital can be invested strategically on the physical teaching spaces that are most needed.”

Hames Sharley’s Associate and Education Thought Leader, Michael Lambert – who has had first-hand experience in developing school projects in the UK – points out that there are three major elements to consider when designing future schools – either horizontal or vertical.

“Understanding the pedagogical vision for the educational facility, how learners learn and teachers teach, is really important,” Michael said.

Pedagogical requirements aside, what are the key features of the vertical school, and how does Sydney’s St Andrew’s Cathedral School compare to international examples?

“The Bridge Academy in London has a large column-free hall as the heart around which classrooms are arranged over several levels. By contrast, Orestad College in Copenhagen has an oscillating atrium and classrooms are configured so there is no need for corridors.

“For Sydney’s St Andrew’s Cathedral School their heart space is the Cathedral, along with a forecourt, providing a hub where the school community can come together.”

James also writes that while many international vertical schools feature either a single building (or cluster of integrated buildings) with year groups distributed across the various levels, St Andrew’s Cathedral School is spread across two completely separate buildings, with the junior and middle school in one and the senior college in the other.

“This has been successful in providing students with a noticeable transition to senior college, bringing with it a change in privileges and expected behaviours,” James said.

Overall James believes the challenges associated with vertical schools are outweighed by the benefits.

“This (vertical) building typology actually creates a series of opportunities for schools to be more inclusive and engaged with its students and the wider community.

“Accessible education needs to be a key focus for Australia as our knowledge-based economy grows.” 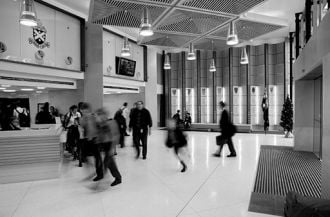