After 68 years of debate, and 52 separate reports, Badgerys Creek has finally been determined as the site of Sydney’s second airport. The long-awaited decision will lead to millions of dollars in investment, create thousands of jobs and transform the character and future of Sydney’s western suburbs. Attitudes to landside development at airports have undergone a transformation in the past decade, as airports became privatised and their new owners saw opportunities for landside development. The resulting clashes with state and local planning authorities led to new laws and a lot of learning about what works and what does not.

Will Badgerys Creek learn from past lessons?

Badgerys Creek stands to benefit from these lessons, and has the potential to become the centrepiece of the western Sydney economy, says Hames Sharley’s director, Michelle Cramer. “The privatisation of airports helped transform them from single purpose to multi-use destinations,” Cramer says. “It means that airports can become a centrepiece for an economic region. The people getting on and off those planes are knowledge workers. It is not only about transport, but also about carriage of goods and services that are also knowledge-based.”

The landside development of Canberra Airport is a case in point. It has taken Stephen Bryon, the managing director of the Canberra Airport Group, over 15 years to realise his company’s vision for the airport, which last year was named Australian Airport of the Year at the National Airport Industry Awards. After Byron’s father, Terry Snow, purchased the airport in 1998, he went on a global tour of smaller airports in Europe and Scandinavia with leading Canberra architect Alastair Swayn (recently appointed the ACT’s first government architect). Byron says: “They concluded that there was an opportunity to create a campus-style precinct with aerospace, defence and IT professionals at the Canberra Airport, based on a long-term master plan.” The master plan was approved by August 1999 and the first 4,000 sm of the development completed in early 2000. The precinct is now home to the $250 million Canberra International Airport, the Brindabella Business Park, the Defence Establishment Fairbairn and associated Fairbairn Business Park and the Majura Park shopping precinct. Overall, developing the entire precinct, which includes funding the upgrade of the surrounding roads, has cost over $1 billion, funded by four Australian banks. Byron says the outlook for a return on investment is 40 to 50 years, and the landside development has been crucial to his company’s ability to upgrade the airport facilities. “We have been able to secure long-term leases landside that gave us the financial capacity to tackle the new terminal,” he says.

The development has been a remarkable success, avoiding the clashes between developer and planning authorities and local communities that occurred in Melbourne and Brisbane when landside developments created traffic problems. The Capital Airport Group’s strategy to engage the community was a simple one, Byron says. “We had the view that the best way to manage criticism was to develop the best quality product with the best planning and landscaping and the highest environmental credentials, and if we were doing something substantially better than elsewhere, we would be somewhat immune from criticisms of corporate competitors.” Nevertheless, the CAG took care to keep the community engaged. As well as running a substantial consultation program, the company established a community forum that met four times a year. “We also adopted a transparent, accessible approach with the local media,” Byron says. It wasn’t all smooth sailing. The development has been criticised for removing jobs and activity from the city’s town centre, Civic, while delays in the state-funded construction of roads, resulted in traffic congestion and complaints.

The campus-style development, being built in stages, involves the buildings being set “as pavilions in a parkland landscape, richly textured with beautiful trees supplemented by artworks,” Byron says. “Brindabella Business Park is now home to approximately 7,000 workers and 46 businesses, all residing in 19 A-grade commercial buildings totalling 100,000m² NLA. With a further 45,000m² either under construction or in the planning,” CAG’s website explains. Majura Park, to the north-west of the airport, houses office buildings powered by one of the largest tri-generation plants in Australia, as well as an entire retail centre housing big-name retailers like Costco, Masters Home Improvement, Ray’s Outdoors, Woolworths Petrol, Big W, Dick Smith and Toys”R”Us, Babies”R”Us as well as speciality stores. Fairbairn, the third commercial precinct at Canberra Airport, is over 90 hectares of commercial office space, function centres and facilities such as an 18-hole golf course, basketball, volleyball and tennis courts all set within landscaped gardens and other recreational facilities. All three precincts have successfully attracted long-term government and commercial tenants, and have set new standards in environmental design, sustainable use of resources, and integration of work, shopping, formal and informal recreation, public and private transport and integration with surrounding suburbs and communities.

Could do better?
But Byron is hoping his company’s effort will spur others to higher achievements. “When you do something well, others try to match and beat it, and we are very willing to work with other airport and commercial architecture firms, so show them around what we have done, and talk about how we went about it. There is an opportunity to leverage off this, learn and go one step better.” Cramer says: “The great opportunity for Badgerys Creek is to create a new, vibrant economic hub for the Sydney metro, one that supports the regional and national economy and delivers much-needed jobs for the region, while providing a 24/7 second airport for the city. 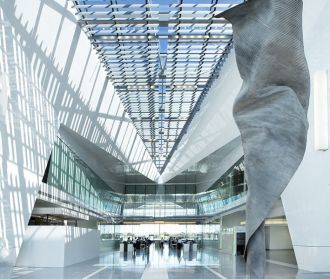