The town of Byron Bay has launched Australia’s first entirely solar-powered train, turning a heritage engine that has sat idle for the past 25 years into an important transport solution for the area.

Made possible by a generous contribution from the Lithgow State Mine Railway, the route stretches three kilometres and employs unused track that is more than 120 years old. The line, which has sat unused for quite some time, is quite straight and flat, ensuring the train uses minimal energy.

Solar power operates all of the train’s systems – including traction power, lighting, control circuits and air compressors – and is sourced from panels atop both the train and its storage shed, which charge the onboard battery pack when the train is idle. In the unlikely case of an electrical fault, the train has a backup diesel engine of a variety proven to be clean-burning.

The aim of the new service is to reduce cars in the area of Byron Bay, which often experiences gridlock during peak hours. The council hopes to improve this further by establishing a dedicated park-and-ride facility along the rail corridor.

More can be learned about the workings of the solar-powered train here. 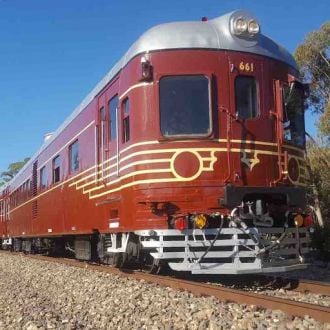