Make your workspace more creative with these vital design elements

Creativity is acknowledged by today’s leading companies as a competitive advantage. A workspace designed to foster a creative culture is high on the list of “must-haves” when companies come to Schiavello, an office creation company, says Keti Malkoski, the principal of people and culture.

Media focus on office fit-out such as Google’s, with bean bags and games rooms, have inspired companies to try new ideas.

But there is no prescription that applies to every workplace.

While there is a body of scientific research behind fostering creativity, the most effective office design puts individuals and the organisational priorities first, says Malkoski, an organisational psychologist who advises clients about principles emerging from this research.

“As individuals, we have diverse creative capabilities, and it takes different environments to release that. Spaces can be positioned from very focused to very collaborative,” she says. “Schiavello is focused on creating environments that promote people and business effectiveness.
Activity-based working is the idea of designing offices for the users daily activities, rather than based on the businesses employee hierarchy. The ABW principle became somewhat “militant” for a while, says Melanie Colegate, senior interior designer at Hames Sharley, as if ABW was the nirvana of office design.

Individuals are as important as tasks

ABW principle has been mistakenly associated with hot desking and became popular with businesses as it was understood to be more space efficient than the traditional workplace model. This is one of the factors that is prompting a rethink in office design.

Colegate says the most productive and creative workplace fit-outs are tailored for the business commissioning them and considers the individuals involved. “We design to benefit the individual and their daily tasks which in turn benefits the business,” she says.
A recent study revealed that introducing highly creative people into a workplace will lift the creative capacity of others in that workplace, says Julie Crabtree, a psychologist and co-author of Living with a Creative Mind.

However, the study also found that if the organisational culture did not support creativity, the opposite happened – the creative people became less creative.

The design of a workplace signals to creative people whether or not the culture will support them says Crabtree, who co-founded The Zebra Collective with her husband Jeff, a resource for creatives and their supporters.

“If you walk into a workplace with very structured workstations, it says to a creative individual this is not a creative organisation,” Crabtree says. “If you walk in and see different spaces, a space for play – in one Los Angeles branding agencies you see an aeroplane-shaped red heart, huge high ceilings, and a café area straight away – creatives will think this is a culture where I will fit in.”

The clues to designing for creativity lie in understanding how creative thinking works, says Crabtree, who has spent decades studying the thinking and temperaments of creative people.

“When you look at creative thinking, there a couple of elements that stand out,” she says. “Fluidity is one. Creatives think faster, and what they are thinking about is original. They are able to explore and develop those ideas. They are comfortable with complexity and, as part of that, are not going to come immediately to solutions. In fact, creativity is about finding problems and being curious about them.”

In terms of creative personality traits, she adds, there is both openness and what psychologists call “high neurosis”, or high emotional sensitivity.
Ping pong tables and flying foxes are an extreme expression of informality; signalling creative freedom does not need to be complex or expensive.

Colgate says updating the office fit-out regularly signals to everyone that leaders appreciate how important the office environment is to productivity and creativity. “It helps businesses attract staff if they have an engaging fit-out because people feel good,” she says.

Then it’s a matter of introducing choice. “Once you create a variety of space types, people feel part of more dynamic space overall,” Colgate says.

Malkoski says research into the health impacts of sitting for many hours each day has prompted interest in workstations that can be adjusted to work in both standing and sitting positions.

The design also influences people’s energy levels, Malkoski says. “Spaces can be relaxing or energising. If you think about space in your home, the interactions you have on your couch are very different to those you have in your study.”

Residential design considerations are increasingly being used in office spaces, she says.

Relaxing spaces may be defined by lighting; choice of colours; proximity to views of nature, pot-plants or natural light; and furniture that promote different postures, she says. “Not just seating, but standing, leaning, informal couches and booths that create different mindsets.”

Crabtree emphasises the need for spaces that support the journey of creation. “Creative is the first part, which is non-judgemental, instinctive, exploratory, playful and curious. But if you stay in the zone, you are not going to get very far; you need to move to the more critical, linear type of thinking to bring projects to life.”

When an organisation’s work demands a lot of creative thinking, Crabtree says a quiet space where people can be alone will calm and sooth the emotionally sensitive as they transition from one mode of work to another. “This is challenging in very open plan areas,” she says.
Any move to develop and encourage creativity, with the many benefits of innovation and business growth is also about change and culture.

Leaders who are clear about the business benefits, and committed to the design ideas that support them, achieve change and success faster and more smoothly.

The principle underpinning the design and fit-out is supporting individuals to do their best work for the organisation’s goals.

A choice of spaces will foster different moods and energy levels, and signal that creativity is welcomed and encouraged in the workspace. 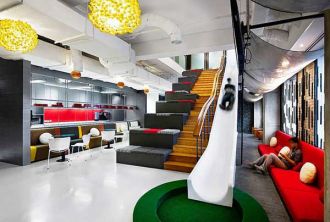