A model for a new era of recreation: Darling Quarter playground

Judging by the squeals and laughter coming from the Darling Quarter playground in Sydney’s Darling Harbour, this new 4,000 sqm leisure zone has the glowing endorsement of the kids that use it.

When evening comes, the demographic changes. The little ones have gone home, to be replaced by teenagers and young adults who have wandered over from the surrounding shops and restaurants to goof around on the 21-metre flying fox, the giant swing or the 10m high Octanet. The precinct has become a magnet for young and old alike.

Designed by Aspect Studios for the development company, Lend Lease, and the Sydney Harbour Foreshore Authority, and built at a cost of more than $10 million, the Darling Quarter playground has been hailed as a new genre of playspace that draws whole families from far and wide to stay for long periods of time. (Read More)

As part of the $500 million Darling Quarter redevelopment, the playground has won a stream of local and international urban design awards since its completion in 2011, with commendations coming from the 2013 National Architecture Awards, the CCAA Public Domain Awards and the 2012 Asia Pacific Property Awards, among others.

Aspect Studios director Sacha Coles says increasing urban density and the rise of apartment living are raising the bar on how to best use limited public spaces.

“There’s a lot more pressure on public spaces like Darling Quarter to perform a whole series of roles,” Coles says. “Not everyone needs a big backyard if they have access to fantastic public spaces. This is a bigger conversation we need to be having around shared resources in our cities.”

Apartment-living is no longer just an inner city phenomenon – suburbs are getting denser too. Projects such as the Darling Quarter playground offer ideas and inspiration to developers and planners searching for successful new models of public recreation.
Darling Harbour is one of Sydney’s most visited locations, and the pressure was high to deliver a precinct that lived up to community expectations. But the precinct’s popularity cannot be explained by the pre-existing foot traffic alone.

BUILDING A SENSE OF HISTORY AND DISCOVERY INTO PLAY

A large number of “place-making” features have been incorporated to make the site appeal to as many people as possible.

For example, the centrepiece of the playground is an innovative network of water streams and jets, which harken back to the site’s industrial history. Children can pump the water into the streams, then re-direct it in myriad ways using sluice gates, water switches and sand.

“There are challenges there for kids,” Coles says. “It’s not just physical, it’s social. The whole design of the water play space means kids have to communicate and work together, often with kids they don’t know or haven’t met previously.”

There are also aromatic plants and butterfly-attracting species for added surprises.

For older kids, there are elements of challenge and managed risk. They can use ropes to scale the back of a 3m-high, 8m-long slide, scream along on the flying fox or climb to the top of a 10m high rope structure.

There are no fences around the area, and this was an intentional move to encourage adult participation. (The absence of nearby roads has made this possible.)

“It’s better all around if you can get away with it, not to have a sense of being in a playground,” Coles says. “You use landscape, seating and level changes to demarcate where the limits of a playspace are. We like doing that because fences are often a lazy approach where parents put their kids on the fence, take out their iPhone and switch off.”
The area’s appeal doesn’t end at sunset. A lighting master plan has made it Australia’s first illuminated night-time playground, with mood lighting making it a pleasant place to sit in the evening.

Restaurants and shops facing the precinct stay open until 11 pm and encourage people to stay in the area, keeping the foot traffic high and minimising anti-social behaviour that can take place in parks after dark.

A lot of thought went into boosting the area’s connectivity. Crowds can intuitively make their way down from the CBD via a new civic connector from Bathurst Street. The first levels of commercial buildings in the precinct are activated at ground level with restaurants, shops and lobbies.

The space is curated to keep it ever-changing. Moveable public seating and rugs, and table tennis tables to ensure a range of experiences for different age groups.

“If it’s a key public space, you really have to treat it like you would a cultural building,” Coles says. “With a curator, you can think about it as a place that’s going to evolve and change over time. You need to fund that challenge and make sure you have sufficient money.”

The only thing absent is activities for early to late teens, like basketball or skating facilities, Coles says.
The site’s unprecedented popularity has thrown up new challenges. Tonnes of sand are removed from the sumps every month, the sand areas need daily cleaning and the water equipment, imported from Germany, can be costly to maintain. The maintenance budget has reportedly been increased.

Rod McCoy, executive project director Australia for Lend Lease, says: “To some, it made little commercial sense to spend over A$10 million building a park on someone else’s land. The Darling Quarter team, however, saw it as absolutely necessary…” (Read More)

With developers seeking to get the most out of often tight budgets, Coles says the biggest challenge with projects like these is making them viable. Securing the Commonwealth Bank of Australia early as a major tenant helped lower the risk of the project. Apart from the obvious social benefits that space like these offer to the public, it also offered benefits to CBA employees.

“They have around 6000 people working on the doorstep,” Coles says. “They are parents, they want to meet their kids in an environment that is relaxed and leisurely. For them, it’s a great offer to see something which evolves, not just a static place.”

For Coles, it’s also been an initiative in opening up the Sydney CBD to a broader range of people. In his opinion, the CBD still caters mainly to commercial workers.

“We see a great opportunity to enliven the city to invite children back to it,” Coles says. “They will form that connection as kids and it will remain as they grow older, too.” 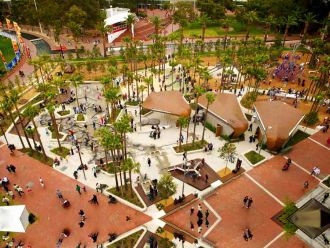