Disrupting the retail hierarchy – It’s always been about the people…

During the mid 20th-century Australian shopping centres were developed within a retail hierarchy that was based on modern suburban family life.

Shops that offered everyday convenience items were located in small centres close to home. Walking there was an option but as car ownership grew, more women worked outside the home and households became time poor, access was more frequently by car.

Larger, district centres offered a broader range of household goods and services at a greater distance from home, often located on regional roads that gave easy access to a wider catchment. Typically, the weekly shop was carried home in the family car, but these centres were also accessible by bus-enabling older people and teenagers to use the centres for shopping and as a meeting place. Cinemas and food halls added to the attractions.

The city centre and large regional centres then offered different and comparative shopping in department stores, as well as leisure experiences to a much bigger catchment. Visits to these larger centres were usually less frequent and focused more on fashion and homewares rather than groceries and food.

It was assumed that all shopping centres outside the city centres would be primarily accessed by car and little attention was paid to public transport access. Two-car families became the norm and we all owned or had access to a car on gaining our licence at the age of 17. In response, shopping centres provided large car parks ideally located within 100 metres of the centre’s door. This was for the customer’s convenience but also to direct them to the centre without distraction.

So what is the future role for shopping centres out in the suburbs? Will they evolve to once again become town centres rich in community and commercial life? Will they also offer housing choices for those who don’t favour the suburban idyll?

Through changes to planning policy in this century, shopping centres are no longer seen as set in separately zoned locations; they are envisaged to be mixed in with other activities that make for a vibrant, liveable community environment. It is no longer sufficient to design a shopping centre as an efficient retail-delivery model: complexity and disruption have crept in.

The basis for the mid-20th century retail model was the ability for customers to arrive by private car. Transport usage is now shifting toward higher use of transport choices such as cycling or walking. Young people don’t race to get their licence at 17. Soon we will see autonomous vehicles on our roads and the ride-sharing economy will continue to shift the ways we get around the city.

The integration of shopping centres with public transport nodes is a critical consideration for future centres and one that has traditionally been avoided by retail property developers, who have curiously considered that public transport users don’t shop. Customers are now seeking shopping opportunities as part of their other journeys – to work or school. We now walk and cycle more and often take multi-modal journeys that include short walks between public transport and our destinations. This is a good thing for our personal health as well as the health and human qualities of our cities.

Danish architect Jan Gehl believes cities should be designed to be enjoyed at human walking speed, rather than blurring past through the window of a car.

“Modernism and ‘motorism’ confused a lot of architects and planners about what was a comfortable scale for human beings,” he says. “We went from having architecture suited to the travel speed of five kilometres an hour to entire cities of sixty kilometres an hour… we weren’t able to see anything in detail as we moved so fast.” As people get out of their cars and change the way they interact with their surroundings, rather than flash through them from A to B, the nature of their shopping destinations must surely evolve.

With our cities and suburbs becoming more intensely developed, the cost of land around shopping centres is increasing. This is reducing the viability for the shopping centre owner of providing ample and free customer car parking. The pressures of increased urban intensity are also causing management conflicts as people use shopping centre car parks for other purposes including ‘park and ride’.

Current government policies continue to promote a hierarchy of activity centres from the capital city through town centres to local community nodes and village centres. It is very similar to the car-based retail hierarchy, which has shaped our modern cities, and which, in turn, evolved from traditional city and settlement patterns. We are now returning to these traditional settlement patterns as we refocus on walkable places rather than on car access, and on mixed uses in diverse and vibrant destinations rather than on mono-use separated zones and precincts. This refocus brings with it the need for new ways of thinking about delivering retail centres.

Shopping is once again in the mix of village, town and city life offering 21st-century transactional opportunities amid the disruption of the digital world, and surrounded by apartments, offices, restaurants and places of culture, leisure and recreation. Places where people want to interact with others and transact their lives. The choices people make about which place to visit will be determined by the location’s experiential and human qualities.

How much of the city’s life will the retail property developer provide as part of the shopping centre of the future? How will the shopping centre adapt to being immersed into a more complex and diverse environment and to the demands of delivering a more connected and liveable place that can evolve with our ever-changing ways of living?

Should the shopping centre continue primarily to provide for consumers or should it deliver places that attract people as citizens, in the way villages, towns and cities have always done?

This article was first published in the December 2017 edition of Shopping Centre News. 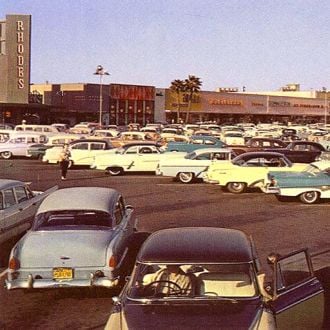