The evolution of activity-based workplaces

Activity-based working has revolutionised the open-plan office, but the pressure is on to keep up innovation and deliver on the promises of flexibility and freedom at work.

For most corporate workers today, the cellular office is something seen only in dated American movies (perhaps with longing).

The rise and rise of the open-plan and activity-based workplace has eradicated the most prominent symbols of corporate hierarchy, and boosted collaboration and workplace innovation.

But it’s still a work in progress.

As new research unfolds, designers are refining their ideas to get the balance between efficiency, productivity and creativity right.

For example, one recent study found open-plan environments can lead to lower productivity and poor worker satisfaction because of constant distraction.

Researchers and industry are responding to such studies by developing new ways to bring out collaborative zeal while still allowing employees to get their work done in peace.

The solution, they say, involves designing for the different needs workers have in the office, as well as a top-down mindset change.

While some earlier fit-outs he saw a few years ago were “extreme” in their openness and lack of privacy, there has been a growing realisation that office workers need multiple zones for different activities, including places to buckle down and focus without distraction, Collins says.

“I think we can safely say this is the workplace of the future,” Collins says. “There’s three huge towers going into Barangaroo and almost every tenant going in there has some form of activity-based working.”

Stylecraft’s Darlinghurst office has a space called Inhabit where people from various organisations can try activity-based working for a few days or weeks before their company rolls it out.

Inhabit is zoned into different areas to suit different activities, whether they be collaborative, quiet, or open-plan work.

The biggest complaint Collins hears is that the loss of the permanent desk makes it hard to create a personal space with photos of loved ones.

“That seems to be the biggest one for people to get their head around.”

Noise and distraction is also still a problem that workplaces are addressing. “In the Inhabit space we have two quiet rooms where you can go and read an important document or if you need time to think,” Collins says.

There are also furniture pieces that allow the worker to still be visible and not hidden away, but provide acoustic cushioning.

A complete change of mindset
More than simply providing the right furniture and environment, activity-based working (AWB) needs to be seen as a mindset change. Sociologist and change management specialist John Holm, from Sociodesign, says companies are most likely to encounter resistance when they enact it without taking their people on the change journey. Line managers become anxious when their staff “disappear on them” and start cutting back on the flexibility it is meant to offer.

“That’s what anecdotally is starting to happen in some of these workplaces,” Holm says. “Managers haven’t been taken along on the journey.”

When workplaces come at it from the perspective of re-designing the workplace to best suit the activities that take place there, big productivity gains can be made, he says. Decisions get made quicker, and different project teams can avoid doubling up.

“What one workplace found was overall [the workplace was] more productive, even though individually they might feel less productive,” Holm says.

Noise, silence and air-conditioning
Plenty of people aren’t the least bit sentimental about the death of the closed office. A 2010 survey by Johnson Controls of 5375 workers around the world, called the Oxygenz research project, found Gen Y were more open to shared workspaces than dedicated individual workspaces.

However, last year a study by Jungsoo Kim and Richard de Dear of the University of Sydney Faculty of Architecture found those with private offices were far more satisfied than those working open plan. De Dear is the director of Sydney University’s Indoor Environmental Quality Laboratory, which measures the impact of environmental factors on office workers in simulated office settings.

He is sceptical about the collaborative benefits of open-plan office spaces. “It’s about saving costs. The other claims are a bit of a furphy,” he says.

But there are ways to make it work better than it currently does, de Dear says.

The biggest problem with ABW is the noise in open-plan sections of the office.

Telephone conversations are particularly distracting. Surprisingly, as technology has made air-conditioning quieter, the noise problem has worsened, de Dear says. To alleviate this, some offices are experimenting with deliberately using ‘pink noise’, which is essentially background noise at selected frequencies, to mask conversation in the same way air conditioning used to.

Multiple work zones are crucial to prevent worker attention “ricocheting” from one thing to another, de Dear says. When there are places where it’s OK to be noisy, workers are increasingly treating the open-plan office as they would a public library. 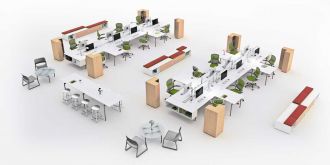