Empowerment Through Education and a Love of Knowledge

A close friend recently hosted a dinner party at which my partner and I were guests. Almost equal numbers of men and women gathered around the table. The conversation was lively, engaging and eclectic. I reflect now on how an article showcasing the careers of these women might read:

At the table sat several extraordinary women: a senior anaesthetist from an historic Brisbane teaching hospital, a psychiatrist, a recently retired CEO of a large not for profit organisation, the chief radiologist at a cutting-edge Brisbane breast clinic, a principal and senior architect of a large architectural practice.

As a young professional, I would have used such an occasion to download my gender equity frustrations and seek advice from ‘the sisterhood’. As I reflected on this dinner, I realised the peace and empowerment that comes from not doing so.

It is true that these are all accomplished women. Each one of them successful in professions inhabited and led historically by men. Some of these women were lucky to have an inspiring female role model or two. Others less so. I reflected on what might be some other more powerful enablers of success. What did we have in common, around that table, that enabled our successes?

It could be argued that, in focusing on difficulties related to gender equity, mindsets detrimental to success are deployed. Regardless of gender and one’s experienced difficulties at the time, thinking patterns of blame, self-doubt, envy and comparison are distractions to success. These women had capitalised on their cleverness and the educational opportunities afforded them at the time. Without losing focus, they had moved through, around, over and under barriers as they arose.

As a child growing up in a small farming community, I had seen several families in difficulties as a result of parents separating. In the absence of today’s more equitable divorce laws, I was struck by the vulnerability of these single parents left raising their children by themselves. With little in the way of education, their employment was limited to low paid un-skilled labour. They were locked into a cycle of poverty from circumstances they had not predicted.

Many years later, in the manner of life’s capacity for oddly serendipitous events, I unexpectedly became a single parent to three children. My professional role, enabled by education kept us economically stable and indeed, in time, to flourish. Without access to good education, women are at risk of joining the increasing group of Australian poor which is divorced women over 55.

What was it that made the conversation at that table so eclectic and engaging? It seemed to me to have stemmed from a love of:

Children, family, community, impending retirement and an extraordinary array of hobbies and new passions: exquisite jewellery-making, cordon-bleu cooking, gardening, collecting, painting, sculpting and a love of music. These women were absorbed by the opportunities learning afforded them. In common they shared the empowerment of education and the love of learning. 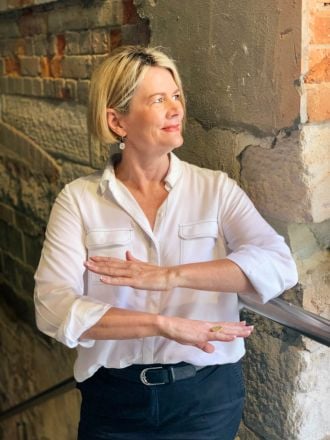