From off grid homes to high-rises

Move over driverless cars, Tesla is ready to make an even bigger impact on our lives, our cities and our homes, with their recently announced off-grid solar technology offer.

But how will this accessible new solar technology impact our lives, economy, environment and our architecture?

In October, on a back lot at Universal Studios, Tesla chairman Elon Musk not only revealed the company’s new souped-up Powerwall 2 home battery solution, it also showcased its aesthetically striking new solar roof tiles – on the immaculate set of Desperate Housewives no less.

“The battery revolution of 2016 shows that people are hungry to dive into the world of renewable energy and there is huge interest as these products are tried and tested in the homes of consumers,” Natural Solar said in a statement.

Tesla claims the Powerwall 2 battery with its solar roof tiles can provide enough electricity to power a standard family home, for less than the overall cost of installing a regular roof and paying your average electricity bills.

The aesthetics of the tiles, as opposed to traditional solar panels, have also got people talking.

Darrell Etherington from TechCrunch says that outside of the increased power and strength of the tiles and Powerwall 2, the importance of the look for the homeowner market can’t be underestimated.

“It’s easy to dismiss the aesthetic import of how Tesla’s tiles look, but it’s actually important, and a real consideration for homeowners looking to build new homes or revamp their existing ones,” he writes.

“The appearance of the tiles, which come in four distinct flavors (Textured Glass, Slate Glass, Tuscan Glass and Smooth Glass) is going to be a core consideration for prospective buyers, especially those at the top end of the addressable market with the disposable income available to do everything they can to ensure their home looks as good as it possibly can.

“As with other kinds of technologies that are looking to make the leap from outlier oddity to mainstream mainstay, solar has a hurdle to leap in terms of customer perception.”

Not everyone is convinced though. In an article for Vox, David Roberts said the Tesla announcement in October was “underwhelming”.

“The roof tiles are handsome, but all the details relevant to their commercial prospects remain unknown,” he writes.

His advice? Forget the Tesla off-grid home hype and start looking at solar as a bigger, broader, smarter prospect for everything from homes to high-rises.

“In September, a company called SunCulture released the SolPad and SolPad Mobile, which are, for my money, the coolest energy tech to debut this year,” he writes.

“The SolPad is a rooftop solar panel, a battery, inverter, and energy management software all in a single unibody enclosure.”

And while the SolPad is very much a personalised, smart home solution, for architects interested in integrating solar technology into their designs, a new solar window product, which was released in July last year shows the potential for large commercial building projects.

“In July, a new company called Solar Window Technologies, which has been working in collaboration with NREL, unveiled its SolarWindow. It is, as the name suggests, a window that generates power,” Roberts writes.

“The target application is large urban towers and skyscrapers, where SolarWindow can outperform conventional PV “50-fold,” the company claims – for the simple reason that conventional PV only fits on a tiny area on the roof, where solar windows can cover the building and capture all light, from any angle.”

No matter what device you use, it’s the extra benefits of sourcing and storing power for personal use, for “rainy days” or outages, or even, to potentially “sell back” to power companies that have really captured the attention of homeowners and corporates.

While solar has been led by the residential market – as is clear with the new Tesla tiles – new survey results published by management company Energy Action and reported by Reneweconomy, shows that the commercial sector in Australia is starting to take an interest in energy saving, and ultimately cost-saving, solutions.

“According to the survey, 23 percent of businesses generate some portion of their electricity supply using solar PV, up from just 14 percent just two years ago,” they report.

“Another 37 percent said they had “implemented solar PV measures in their business,” up from 23 percent in 2014.

“Meanwhile, the proportion of businesses who said they were seriously considering investing in technologies like solar PV and even battery storage and smart energy management systems was 84%.”

This, along with an increase in government incentives for sustainable building upgrades in Australia’s cities, presents a major opportunity for commercial architects and builders.

The recently announced Building Upgrade Finance (BUF) scheme, which rewards landlords for making sustainable updates to their commercial buildings by collecting an energy-saving rate charge from tenants, is just one example of this.

In a recent article about the BUF incentives scheme, Hames Sharley’s Adelaide Studio Manager, Darren Bilsborough said that while any upgrades to buildings will improve value, the major focus for the future will be on the integration of sustainable upgrades – including the installation of solar power technologies.

“There are plenty of internal and external environmental outcomes that can be achieved by going through a building upgrade of any description – it’s about working with the right designers to better understand how upgrades and improvements can reposition and add value to outdated office spaces,” Darren said.

“The fact that our team of interior designers and architects are now designing with office place wellness and environmental standards in mind, it is clear that the opportunities are endless for improving, repositioning and rebranding commercial office spaces to be attractive to existing or future tenants.” 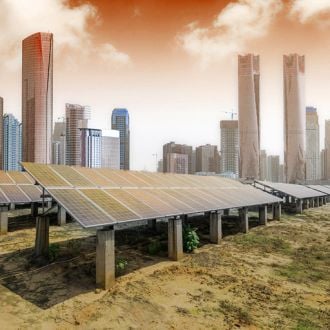