Building upgrades to improve commercial vibrancy of the city

A major opportunity for commercial property owners and property developers will be launched in Adelaide next week, with the aim of improving the commercial and environmental sustainability of the city.

The state government’s new Building Upgrade Finance (BUF) scheme will be launched at the Adelaide Convention Centre next Tuesday, 30 August, with a keynote speech from the Premier of South Australia, Jay Weatherill, and a panel discussion featuring Lord Mayor Martin Haese.

Moderating the discussion will be Darren Bilsborough, Hames Sharley’s Adelaide Studio Director, who was part of a team responsible for writing the business case for environmental upgrade finance schemes nationally for the Commonwealth government, in collaboration with Climateworks and the Sustainable Melbourne Fund.

“The city of Adelaide is in a unique position of having much older CBD office stock than the majority of capital cities around Australia, whilst also dealing with high vacancy rates, particularly amongst its C and D grade building stock,” Darren said.

Darren argues that almost any internal or external improvement made to a commercial property that will have a positive impact on the environment can tap into financing using BUF.

“There are plenty of internal and external environmental outcomes that can be achieved by going through a building upgrade of any description – it’s about working with the right designers to better understand how upgrades and improvements can reposition and add value to outdated office spaces,” Darren said.

“The fact that our team of interior designers and architects are now designing with office place wellness and environmental standards in mind, it is clear that the opportunities are endless for improving, repositioning and rebranding commercial office spaces to be attractive to existing or future tenants.”

“One of the really powerful aspects of the BUF scheme is that it has the opportunity to be of benefit to both tenants and owners,” Darren said.

“Traditionally property owners would need to dip into their cash reserves or borrow money to undertake any form of equipment (lighting or air-conditioning) upgrade, and while this could potentially lead to a small valuation increase (if there was an energy saving), the incentive to spend money is potentially marginalized because it wouldn’t necessarily lead to higher rental income.

“Additionally, any energy cost saving would usually flow to the tenant, rather than the building owner under a net lease arrangement – this is usually referred to as the split incentive barrier to improving energy performance for existing office buildings.”

In contrast, the BUF mechanism incentivises building upgrades that create energy savings by collecting a rate charge from tenants – no more than their total energy bills prior to the upgrade – then returning those energy savings back to the owner.

“It provides an opportunity for the building owner to upgrade their commercial property while also giving them a new revenue stream to pay down the debt for the upgrades,” Darren said.

“The benefit for tenants is that they potentially get a better space to work in, an office that’s more environmentally sustainable, provides fresher air, natural light and will ultimately lead to improved productivity.”

Introduced through new state government legislation and with the involvement of local government, Darren said the goal is to improve the quality, environmental sustainability, and attractiveness of Adelaide’s commercial office buildings, leading to reduced vacancy rates and increased economic activity.

“The great opportunity here is for property owners whose assets are becoming redundant in a marketplace where tenants are demanding a higher quality offering,” he said.

“Through the BUF they will have an opportunity to upgrade, redesign and reposition their buildings through a cost-effective financing mechanism that will lead to greater value for both building owners and the tenants that occupy them.” 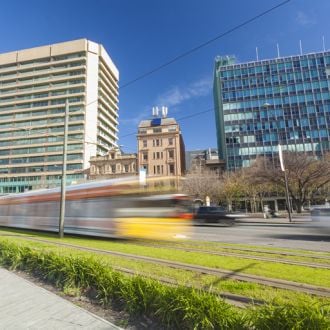