The new brief for traffic engineers: Get cars off our streets!

Restrictive planning regulations are not only outlawing the building of the kind of streets we most love today, they are also banishing thousands of city residents to an unhealthy life of car dependency, argues traffic engineer and planning consultant Steven Burgess.

Burgess, principal of Brisbane-based transport and planning consultancy MRCagney, told the participants of the Making Cities Liveable 2014 conference recently that a traffic engineer’s job should be trying to help people lead fulfilling lives without using cars. But car-centric planning has reached such an extreme that whole suburbs are being designed with the car in mind more than the wellbeing of their residents.

The result of road-focussed planning is evident in places like Werribee on Melbourne’s far south-western fringe, where residents rely on cars to work, shop and study.

“It’s not a community,” Burgess said. “It’s a storage lot where you put people overnight when you’re not using them.”

The source of the planning gap

The problem comes from a hierarchy of streets, designed by “old-fashioned” traffic engineers a long time ago, and followed closely during the planning approval process. That hierarchy dictates street design codes purely according to how many cars are expected to use them, Burgess said.

Beyond a certain threshold, typically 3000 car movements per day but varying according to the council, a range of restrictions set in. Cars can no longer back onto the street, for example, so developments have to have a large setback to allow cars to turn around and come out forwards.

These planning codes mean new housing estates are often designed to have no streets with that car volume, just a lot of smaller streets that empty onto major arterial roads.

But this has caused us to accidentally ban the “in-between streets” that many people love today – the kind packed with shop-fronts and shop-top flats.

The streets we love

As part of his research, Burgess asked a group of university students to survey Brisbane residents on what their favourite streets were. All of them fitted into the category of having 3000 to 10,000 vehicle movements. These streets that everyone loves would not be possible to build today.

He gave a number of global examples, one of them being West End in London, which “grew up mixed use” with no government money thrown at planning it. It is a walking distance from the city, contains a mix of ultra-expensive and ultra-cheap apartments, and has $2 shops sitting alongside “$200-a-plate restaurants”.

“It’s a really diverse and interesting place, it has a great main street,” Burgess said. “If someone went to build that now the Brisbane City Council wouldn’t let you build it because it doesn’t meet the street code for a major collector.”

Public spaces are either designed for people to move or for people to exchange, Burgess said – whether this is exchanging goods, ideas, beers or kisses. But there is now too much emphasis on the movement side of this equation, in particular, the movement of cars.

The streets we love most were built before the current planning regime, and often before the popularisation of the car, Burgess said. From the perspective of a planner today, they were designed in reverse. Streets were built narrow and shopfronts were crammed
together which, despite causing traffic congestion, made them a better place for the people that used them who were on foot.

Pedestrians could see the shops across the road and “cross-like browns cows”, giving traders access to far more people. Shade was maximised with shop awnings, and there was very little dead space. These are the kinds of streets people take photos of, Burgess said.

Shopping centre developers know that walkers and cycles more readily distribute their money, and that’s why shoppers park at a distance and walk past shops to get to key places, he said. Foot traffic is good for the local economy.

Still, in new districts, streets are built wide with plenty of parking, meaning pedestrians can’t see the shops across the street and can only cross at widely-spaced crossings. Historically there was no point for traders to face the street so internalised shopping malls were built.

So why do we keep building them?

For example, imagine a developer going to an inner city council and proposing to convert some disused industrial sheds into seven or eight two-storey or three-storey townhouses.

Offering a family living on the edge of the CBD, the developer would not provide car spaces, and so would not submit a traffic impact assessment. But the developer, who is confident of being able to sell these townhouses, might offer to do up the footpaths on the entire street and fix up the local bus stop.

“If I was that developer and went into a pre-lodgement at your council, how would I go?” he said.

“They would laugh in my face. They would say, Steve, you bloody idiot.”

But these are the kinds of developments cities need. Cars, in Burgess’ opinion, should be like boats and helicopters.

“If you really like them and you can afford one and you can accept the risk of using one, then get one,” he says. “The car is not the enemy. It’s us forcing people to use them that’s the problem.” 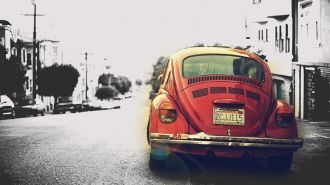