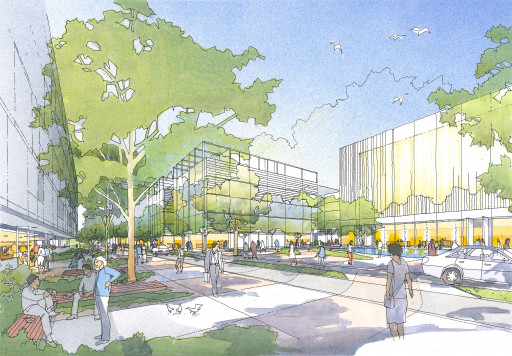 Going viral – how the coronavirus will affect urban design

The COVID-19 pandemic has meant big changes to the ways we interact with each other as a society. Now, with Australia slowly emerging from lockdowns and restrictions, we’re faced with the prospect of returning to normal again. But when it comes to architecture and urban design, what will normal mean? Can it really be business as usual?

‘The pandemic for me personally has created the obvious concerns about health for my family, my co-workers and my friends,’ says Chris Maher, Director and Urban Development Portfolio Leader at Hames Sharley. ‘The deaths are awful, the personal loss and grief are not to be underestimated together with the economic hardships that will and are occurring. But at the same time architects are excited by the opportunity to be part of changes that may come out of this, because we are agents of change. We want to anticipate in our thinking new ways of designing healthy places and towns that work better during and after such events. The knowledge it’s given us is really important and can help us prepare, manage and hopefully prevent future pandemics.’

’Before any changes in urban design can be addressed, however, one of the first concerns urban designers are going to have to respond to is the backlash against density.

‘People are fearful of density now because they associate it with the mass transmission of things like COVID-19,’ says Chris. ‘The Committee for Perth, for example, has been contacted by many people saying, “Obviously I was right, density is not the solution, it’s not as sustainable as everybody says.” And I worry that we’ll all become highly conservative and start talking down density and retreat back into our suburban enclaves. It seems to me that would be a step backwards.

‘But it’s really interesting that there’s a lot of people, particularly in places like Italy, who are craving getting out into the streets again and craving meeting their friends and family. It’s about human nature, the clustering of people that’s happened over many thousands of years. People have clustered together for many reasons – safety, security, shelter – basic human needs and instincts that are constant, and I often talk about those when I’m talking about urban design.’

It’s these basic human needs that have ensured urban density has survived past pandemics, from the Great Plague to the Spanish Flu outbreaks of the early 20th century. But that’s not to say there can’t be a middle ground.

‘I do think in terms of the long-term planning for urban design there are models we can look at,’ says Chris. ‘A way of balancing this denser population and also having access to open space and greenery. Garden cities, for instance came about following a desire to improve the health and social wellbeing of city inhabitants, especially following the rapid densification of cities during the industrial revolution. We’re doing work in Canberra at the moment referencing what Walter and Marion Griffin originally proposed in their masterplan, they always saw Canberra as a place where you can have urbanity, but also green spaces and parks with a connection to nature.

‘I think that trend was already happening and the movement towards biophilic design and having access to greenery is going to be amplified by everything that’s taking place.’

Our human need to congregate is also the reason, Chris believes, that our newfound ability to work from home won’t hasten the end of the office building as we know it – no matter that we may already seem to be moving away from office culture as a society.

‘We spent the last 40 years getting rid of cellular offices and working in open plan and even having hot desks – although these may pause for a moment now! – but I think that idea of working alongside others is quite powerful,’ he says. ‘It wouldn’t have lasted so long if that idea of collaboration, sharing light, sharing space wasn’t a genuine one.

In much the same way, changes in the way we shop could be accelerated by our reaction to the pandemic, but urban designers will still look at keeping us buying in person instead of online.

‘I’m not sure if the days of the big shopping centres and the department store are numbered,’ Chris explains but they will have to change and adapt. ‘They were already under pressure from Amazon.com and online shopping and I think that will only grow with what’s happened with the pandemic. But on the other side we are living in a world where isolation is a problem, and shops and markets are places where people can come together and wander around in close proximity to people without necessarily having to engage with them.’

This realisation that retail is again moving back towards being a community activity rather than just a transactional one may hold the key to how shopping develops post-pandemic. Indeed, a backlash against being obliged to shop online during lockdown may benefit the cause.

‘I think shops are places of entertainment as well, they can also become more integrated more mixed-use hubs with residential density and I think the retailers have realised that it’s more about bringing the community in. Years ago, there were shopping centres with stages in them for events, then in boom times, that space was turned into lettable floor area. I know some have now converted it back, and I think people want that; younger people, in particular, seem to want that experiential existence.’

Overall, then, the knock-on effects of COVID-19 on urban design are more likely to amount to an aggregation of small adjustments and acceleration of existing movements, rather than wholesale, sweeping change.

‘There are going to be a lot of those conversations over the next few months as we learn what changes are going to occur because of COVID-19 and I don’t think we can predict them all,’ says Chris. ‘How we do things to keep people safe, is what’s important, to satisfy peoples needs and make beautiful places. But what we need to get away from is the fear. We need to be more practical, resilient and better able to cope, and hopefully make our world a better place. We need to assume that this could happen again; how are we going to deal with that? How are we going to be better prepared?

‘And I think that’s the role of all designers and architects: to anticipate and then think of ways of making it better.’

Chris Maher is a Hames Sharley Director and National Portfolio Leader for Urban Development. Chris has over 25 years’ experience practising architecture and urban design in the UK, Hong Kong, and throughout Australia. Prior to joining Hames Sharley Chris was the Director of Studio 53, which he co-founded in 2009, following a number of successful National and State Directorial roles with Mirvac.