“I try to explain to young women that practicing architecture is really complicated and it’s very hard, but it’s possible. I discovered early on that to be an architect you have to have a little bit of talent and a maximum of determination and not focus on the complications.”

It’s no secret that there’s a gender gap in architecture. In Australia today, women account for only 30% of the total number of architects. A positive increase compared with since the start of this century, when the figure was closer to 20%, but we still have a long way to go. Until we have a greater number of women in the field, equal pay across the board, and a higher representation of females in leadership roles, we need to keep pushing the importance of gender equality within Australia’s architecture industry.

So in celebration of International Women’s Day, which is a day to celebrate women’s achievements while also calling for gender balance across the world, we thought we’d take a look back through the ages and find some of architecture’s most prominent females who helped pave the way for the women of today.

Although women weren’t officially accepted as architects until the 19th Century, there are records of women involved in architecture from as early as the 16th Century. One of the earliest on record was Katherine Briçonnet, a French noblewoman who played a significant role in the design of Château de Chenonceau in France’s Loire Valley between 1513 and 1521. When her husband, Thomas Bohier, was away fighting the Italian war, Madame Briçonnet oversaw much of the architectural decisions of the chateau. A chateau that has such a strong influence from a long line of women over the years, the chateau is fondly nick named Le Château des Dames (the ladies’ castle).

And while it may seem that Katherine Briçonnet’s foray into architecture was purely circumstantial, Lady Elizabeth Wilbraham appears to be the first female who actively chose to pursue a career in architecture. It was the 17th Century, and at the time it was inconceivable that a female would be an architect – or any professional for that matter – so she reportedly designed largely in secret. A prolific designer, she is known to have designed many residences for family members, but is also believed to be responsible for some 400 designs which were inaccurately attributed to men.

According to American historian John Millar, Lady Elizabeth tutored world renowned architect Christopher Wren, and claims that a number of his designs were in fact the works of Lady Elizabeth Wilbraham. At just 19 years of age, she convinced her husband to take an extended honeymoon through the Netherlands where she studied under Dutch architect Pieter Post, followed by a visit to the Italian-designed Stadtresidenz at Landshut – a building that influenced her work greatly. Drawing with a distinct Dutch and Italian influence, Mr Millar claims her signature style is clearly visible in at least 18 works attributed to Wren, and close to 400 others which were attributed to a ‘mystery architect’ at the time.

It wasn’t until two hundred years later when Louise Blanchard Bethune became the first American woman known to have worked as an architect. An accomplished designer, Bethune was responsible for the design of approximately 150 buildings in the Buffalo and New England regions throughout the late 19th and early 20th Centuries. Unlike her predecessor, Bethune didn’t have to design in secret and was the first woman member of the American Institute of Architects (AIA) and the first woman to be honoured as an AIA Fellow. Sadly, the only building designed by Bethune which still stands today is the Lafayette Hotel in Buffalo. Around the same time, another American pioneer, Chicago born Marion Mahony Griffin, broke ground when she became the world’s first woman to be officially licensed as an architect. After moving to Australia, Griffin played a significant role in the design of Canberra - you can read more about the incredible woman that shaped our capital here.

Arguably, one of the most famous female architects of our current time is the late Dame Zaha Hadid. An Iraqui-British architect, Hadid was known as ‘the queen of the curve’ due to her strikingly curved designs that appear almost fluid. Hadid is responsible for major works around the world, such as the aquatic centre for the London 2012 Olympics, Michigan State University’s Broad Art Museum in the US, and the Guangzhou Opera House in China just to name a few. The ground breaking architect became the first woman to win the Pritzker Prize, architecture’s Nobel in 2004, and was the first woman (on her own) to be awarded the RIBA Gold Medal, Britain’s top architectural award, in 2015.

Another iconic female architect is Denise Scott Brown, but unlike Hadid was unfortunately not recognised for much of her work. Now, she is regarded as one of the most influential architects of the 20th century, having played a critical role in the evolution of architectural theory and design alongside her husband, Robert Venturi. The pair co authored the 1972 book Learning from Las Vegas, which studied the desert city’s buildings and bright neon signs and became one of the seminal texts of architectural theory.

And yet despite her massive influence, during the height of her career which spanned the 70s, 80s and 90s, Scott Brown remained largely invisible. In her essay, “Room at the top? Sexism and the Star System in Architecture”, Scott Brown detailed her experiences as a female in the male dominated world, which included not being invited to industry dinners because ‘wives weren’t invited’, and not being properly recognised by her peers as a partner in her own firm. The icing on the cake was when her husband was awarded the Pritzker Architecture Prize in 1991 for their shared works – a prize many within the industry believe should have been jointly awarded to both.

There are so many incredible women in architecture, throughout history and today, that it’s impossible to name them all. But it’s so important to note that without them, our world would not be as rich, as vibrant, as colourful or as interesting without their important contributions.

Architects design the cities we all live in, spaces we all walk through and buildings we all reside in. So it only makes sense that the people designing those places come from as diverse a background as the people using them.

The architectural industry has made great strides in recent years, but we still have a long way to go before we can claim gender parity. Something we here at Hames Sharley are incredibly passionate about and working very hard to achieve. 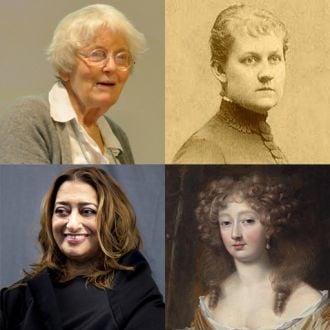