In a recently released report from New York University’s (NYU) Furman Center, more than a quarter of New York’s neighbourhoods have been gentrified over the past two decades.

According to CityLab the report shows that 15 out of the 55 listed neighbourhoods experienced above median rent growth from 1990 to 2010-2014, with certain neighbourhoods – predominately in Brooklyn and Manhattan – seeing a surge in “affluent residents” since “young empty-nesters, and the super-rich have flocked to the city.”

“After losing over 800,000 residents between 1970 and 1980 – more than currently reside in Detroit, Seattle, Washington, D.C., or Nashville – the city has been gaining residents ever since,” CityLab writes.

The NYU report states that Brooklyn’s Williamsburg/Greenpoint experienced a 78% increase in average rental prices between 1990 and 2010-14 – the highest increase of all gentrified neighbourhoods reported – while rent also increased significantly in upper Manhattan near Harlem by up to 50%.

Even the Lower East Side and Chinatown neighbourhoods – which were once synonymous with low income, counterculture, hippies – are now populated with cashed-up young techies and hipsters – with the average rental prices in these areas increased by more than 40% since the 1990s.

Click here for a complete summary of the report’s findings. 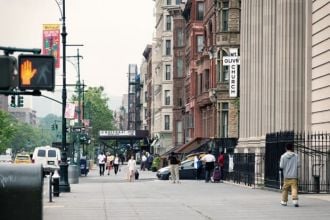