Yet deep uncertainty and division remain over how to reform the process of procuring the architecture, engineering, and related professional services needed to build the slated projects.

There are billions of dollars at stake. Just before Christmas, the New South Wales government updated its $20 billion infrastructure plan to go “further and faster.

Leading Australian CEOs, desperate to improve the nation’s stalled productivity, are anxious to get on with desperately needed projects. When top CEOs were asked by the Australian Financial Review about priorities for 2015, they all named infrastructure.

Although the word “procurement” appeared 357 times in the entire report only two recommendations related to the procurement system with another 10 addressing the related issue of tendering.

Megan Motto, the CEO of the professional services industry association, Consult Australia, says a relatively small number of recommendations to reform procurement is, “by and large, the problem. Procurement is such a complex area, defining problems is easy, but coming up with robust quantifiable solutions is much more difficult,” Motto says.

It is scheduled for release next month.

Consult Australia will release the report, which contains seven recommendations. Motto hopes the government will adopt them all. “The report contains a detailed look at the cost of core procurement,” Motto says. “It is very robust.”

Do we need an Australian Infrastructure Market?

Also arguing for a complete overhaul of the procurement system is Garry Bowditch, CEO of the Smart Infrastructure Facility at the University of Wollongong. Established in 2011 with Federal government funds, SIF argues the need for an Australian Infrastructure Market (AIM) that would bring buyers and sellers together in a transparent process.

“Australia spends more on infrastructure today than ever, but deep structural problems persist,” Bowditch says. “Despite huge dollars being directed to it, this spending is not really making a substantial impact. There is congestion on our roads, bottlenecks at our airports and seaports, and we are seeing issues with energy and water availability.”

And there are bigger problems, says Bowditch. “Our concerns go deeper. We believe there is a systemic misallocation of money, with projects adopted that are not going through proper government processes of prioritisation, and selection.”

Lack of transparency is the issue holding back design innovation and increasing costs, Bowditch says.

The AIM must include every part of the infrastructure system, SIF insists, including markets, land use, planning, approvals, project prioritisation, funding, financing, delivery and operation.”

It seems like a recipe for delays and “analysis paralysis”.

Bowditch disagrees. Full disclosure of the project pipeline and the reasoning behind each choice will foster a vibrant market, and innovations to improve efficiency and new techniques, he says.

Some infrastructure problems can be solved without any construction at all, says Bowditch. “The tyranny of infrastructure is that we all want to use it at the same time.” For example, if governments removed stamp duty on buying homes, it might encourage people to move home when a new job involves greater travel.

The Cross River Rail project in Brisbane, a 5.4km underground tunnel proposal that would have cost about $8 billion, is another example of limited thinking. “This was to fix a 40-minute peak hour problem, and was gold-plated and over-engineered,” says Bowditch. “The [now former] government didn’t ask how we can improve existing infrastructure before we embark on an audacious new project. The new government came up with bus and train tunnel for $5 billion, less than half, tested the principle and fixed the problem.”

The first step is for governments to commit to transparency in project selection. Doing so will start to restore community confidence which has been eroded by high-profile inefficient projects, and collapses in a public-private partnership that has cost taxpayers money.

Bowditch says: “The role of governments is to build the confidence of the community.”

What the Productivity Commission recommends

The Productivity Commission’s recommendations go to the heart of some of the professional services sector’s main pain points, which include:

The Commission’s responses address many of the details raised by industry.

Their recommendations to State and Federal Governments include:

What remains to be seen is whether the Commission’s views and recommendations will impact and shape government procurement processes, and provides the industry with the opportunity to cut costs and deliver innovation. 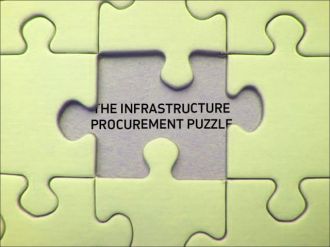