Federal Budget 2014: Infrastructure spending is big on roads at the expense of better city planning

The Abbott government has committed an additional AU$11.6 billion for an “infrastructure growth package” that is heavy on roads but aimed at fast-tracking what it considers critical infrastructure.

The asset recycling initiative will cost AU$5 billion over five years in order to encourage the states to sell assets and redirect the funds into infrastructure.

Together, the investment is expected to lead to additional infrastructure investment of AU$125 billion, and add around 1 percentage point to GDP.

To find the money for the additional spending, the government will reintroduce the bi-annual indexation of the fuel excise, starting in August this year. Funds for asset recycling will also come from the sale of Medibank Private and the potential sale of the Royal Australian Mint, Defence Housing Australia, Australian Hearing, and the registry services business of ASIC.

In order to improve project selection and delivery, the government plans to introduce new governance arrangements for Infrastructure Australia (IA), in order to give it greater independence and transparency.

IA will be required to undertake audits of Australia’s infrastructure asset base every five years and develop a 15-year infrastructure plan. It will also be tasked with evaluating proposals for “nationally significant” economic infrastructure, as well as proposals in the health and education sectors. It will be asked to evaluate projects seeking $100 million or more of government funding, and publish its findings.

Australian cities were starved of infrastructure provision in the early and mid-2000s when the Howard-Costello Coalition government gave priority to the pay down of Australia’s public sector debt and the establishment of the Future Fund to cover the government’s pension liabilities.

The planned ramp-up of infrastructure spending by a newly elected Rudd Labor government in 2007 was undermined by the global financial crisis. This left a newly established Infrastructure Australia with the task of assessing infrastructure projects that it had no capacity to fund.

Not surprisingly, then, Australian cities are starved of efficient, technologically advanced infrastructure. Moreover, there is limited understanding at both state and federal levels about how best to combine private and public sector inputs to address the infrastructure deficit.

Rather than address the complex issues of infrastructure provision with innovative solutions, this budget seems to adopt a simple formula: lean heavily on existing revenue streams in order to lever funds into road building, the easiest of all infrastructure assets to provide.

Then, in the background, the budget provides incentives for state governments to divest brownfields infrastructure assets, motivated not by economic value objectives but by the lure of financial gains for struggling balance sheets.

It is heartening that federal politicians continue to acknowledge the need for raised infrastructure expenditure. It is disappointing, though, that the Coalition government has not shown any intention to explore new options for funding and delivering the infrastructure services needed in an advanced 21st-century economy.

Australian financial institutions are seen worldwide as successful innovators in infrastructure financing. So too, Australian infrastructure constructors and operators are world leaders. Yet our governments, state and federal, seem incapable of harnessing this expertise to develop a new suite of world-leading, sustainable, productive infrastructure. Australian firms are leading infrastructure designers and providers offshore. Unfortunately, we currently lack the political will and imagination to mobilise these at home.

Michiel Bliemer, Professor in Transport and Logistics Network Modelling at University of Sydney

The infrastructure measures in the Budget 2014 are not unexpectedly focused on road infrastructure. Although rail was mentioned by the Treasurer, it is hard to find anything regarding investments in public transport.

As is well-known, more road infrastructure may locally alleviate congestion, but it also means more cars on our roads and into our cities where congestion problems will only get worse.

Public transport alternatives take cars off our roads, which means less congestion for car drivers and improved mobility for non-car drivers and leads to a more sustainable transport system for the future. It is therefore disappointing to see only substantial investments in road infrastructure. The asset recycling initiative offers perhaps a short-term boost in infrastructure investments but does not seem an appropriate model for sustainable infrastructure funding.

The indexation of the fuel excise tax and the hypothecation of the additional revenues for funding infrastructure projects, however, is a good idea given that revenues have been steadily decreasing over the years due to increases in the fuel efficiency of cars. An even better idea would be to introduce a user pays system that charges a higher price per kilometre during peak hours.

Chris Standen, PhD candidate in Transport Policy & Planning at University of Sydney
Asset recycling makes economic sense, but only if the privatised asset does not become a monopoly, and the proceeds are invested in new infrastructure, on which the economic or social return outweighs the forgone future revenue from the recycled assets.

Urban motorways give a negative return on investment, despite glossy business cases contrived by proponents to show the opposite. They encourage sprawl and create dependence on a costly and inefficient mode of transport. As a result, transport costs in car-dependent Australian cities are now twice as much as in cities with good public transport.

Urban motorways do not fix congestion because they simply attract more traffic. Sydney’s M5 and M2, for example.

In the case of WestConnex, Abbott and Baird are squandering A$12billion on a motorway that will allow people to drive from Penrith to the city in 92 minutes, even though the same journey can be completed in 49 minutes today in the comfort of a train. They will be charging motorists thousands of tolls every year for the privilege, on top of all their other costs.

What we have is a car budget really which won’t do very much for the problems we have in cities which are facing congestion problems. I’m not sure more roads is going to help that issue so it’s a bit biased and one-sided in my opinion.

What they do is they say that public transport is a state issue. But they invest in roads so it just creates a biased investment program and priorities. We end up having more and more investments in roads because the states are struggling with budgets for public transport. It just encourages more and more road travel when particularly our central areas are struggling to deal with that because we don’t have enough capacity.

We need a national interest to stop dealing with that issue and to move, particularly in inner areas, towards real investments, which is something all big cities are doing worldwide but unfortunately, this [BUDGET] is just going to encourage more of that thinking.

The budget is devoid of any spending on mass transit infrastructure - and instead proposes to spend large amounts of money on roads, some of which are actually not needed. Whilst roads obviously need to be maintained and built, at the expense of the kind of infrastructure that allows cities to operate efficiently and grow is a material omission. Congestion is costing cities billions of dollars each year.

A far more pressing issue in Perth right now is the need for funding for the light-rail - Metro Area Express (Peter Newman wrote about this for The Conversation last year). This was a WA State (Liberal) Government promise for delivery 2018, which, following WA’s credit downgrading from AAA to AA- in 2013, prompted this to be delayed to 2022. Meanwhile, all the other infrastructure programmes remain prioritised (stadia, Elizabeth Quay, and the road programmes).

Research at Curtin has shown how up to 60% of the light rail can be funded using a value capture method. This is a system of putting aside windfall taxation revenues (stamp duty, capital gains taxes, rates) received as a result of building the rail - land values go up because of it. This innovative funding approach is yet to be tried in Australia (has been in other parts of the world), and in a budget-constrained climate, could allow Australia to really get the infrastructure it needs.

The proposal to build a Perth Freight Link appears to lack detailed business case assessments and is a bizarre attempt at putting in expensive infrastructure that will create more issues than it solves. It will increase the capacity of the Fremantle Port when the surrounding residential areas cannot withstand further heavy traffic imposts.

A far better idea to deal with the growth projections is to relocate the Fremantle Port to James Point in Kwinana. This will allow for the realisation of both the Fremantle City in terms of jobs and residences and at the same time the growth in activity in the port. The Perth Freight link is trying to solve the problem of port access when what is really needed is a new port in Kwinana. Then the emphasis could be moving containers at least in part via rail with the Kwinana to Kewdale Link as well as a Roe Highway Stage 8 extension following the existing rail line. This approach would also have far fewer environmental impacts than the Perth Freight Link, and be located closer to Latitude 31 - a new industrial precinct.

This story was first published in The Conversation. 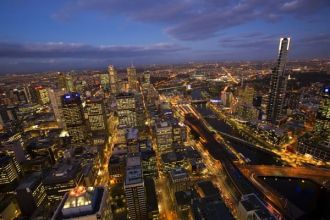