Are social and intercultural issues behind the high rate of homeless Indigenous Australians?

Indigenous Australians make up nearly one-third of homeless people. A new study aims to help architects and policymakers tackle the causes of Indigenous homelessness by asking: Are the social and cultural conditions attached to housing programs part of the problem?

While the design of indigenous housing and public buildings may have improved, housing provision and support programs for Indigenous Australians have in some ways worsened in recent years.

The number of indigenous community housing organisations (ICHOs) - which broker between government departments, local welfare and community organisations and tenants - has fallen dramatically - from 616 across Australia in 2001 to just 328 in 2011, even though the number of houses they manage has grown.

Since John Howard’s 2007 intervention, governments at most levels have attached more stringent conditions to housing programs, sometimes to bring them into line with regulations in general public housing, and sometimes adding extra conditions for indigenous people.

These conditions go beyond the pragmatic – insisting on consistent rental payment and basic maintenance – to social and cultural conductions, such as reporting extended family visits and numbers of tenants, and various attempts to control behaviour that limits employment or is considered anti-social.
The link between housing and health has, in some ways, been used to foster links between housing and social or behavioural change.

That connection is the focus of an important new research project, “Indigenous lifeworlds, conditionality and housing outcomes”, funded by the Australian Housing and Urban Research Institute (AHURI).

The three-year project explores the nexus between government housing providers, indigenous community organisations and tenants as the critical factor in the success or failure of housing programs. The project’s research is not about physical structures being designed and built for Indigenous people, but the social and community structures around housing provision.

One of the study’s five authors, Professor Mark Moran, from the AHURI research centre at the University of Queensland, says, “higher levels of conditionality are being experienced by Indigenous households than ever before.”

Indigenous housing programs have moved “from a persuasive model to a more coercive model”, he says, and a central problem is that conditions imposed by government departments, even when positive, can be communicated poorly, misunderstood and often need to be applied in very different ways in different regions.

Whereas eviction threats might positively change behaviour in larger towns, there’s not much point threatening to evict someone from public housing in a remote community when there are no other homes, Professor Moran points out.

Extending the life of housing programs

Along with changes in government and extreme weather events, poor negotiation between housing providers, community organisations and tenants can give even successful housing projects a short lifespan.

The AHURI study will try to solve some of these problems by looking at past and present housing and accommodation programs in five specific locations: Logan (Qld), Tennant Creek (NT), Palm Island (Qld), Western Australian Goldfields (WA) and Mt Isa (Qld). It embraces metropolitan, regional and remote areas and, critically, five different types of housing policy.

Housing policy fields include income management tied to supply of a house and home ownership on community-titled land – policy areas of particular relevance to the $5.5 billion NPARIH Remote Indigenous Housing program, started in 2008, which aims to deliver over 4000 new dwellings and refurbish another 4,876.

The study will also look at transitional welfare accommodations and tenancy management arrangements coordinated by both ICHOs and state housing authorities.

A pragmatic approach to a politically sensitive program

While many experts would argue against any conditions at all being applied to indigenous housing, Professor Moran says this research project is unique because it looks squarely at what conditions are being applied on the ground and why housing programs have worked or not worked.

“It’s a very political space” but it’s also a “very pragmatic one”, he says.

Although the study will not conclude until late 2015, it is already developing new ways of surveying housing outcomes across different delivery programs and has revealed key issues that will benefit architects and policymakers.

Researchers have already begun to collate ways that a range housing providers and local government bodies develop housing programs that are adapted to their communities.

For example. in Mt Isa, between 2007 and 2008, a combination of proactive strategies was successfully deployed. Tenancy case management included support and early rent arrears alerts as well as targeted risk period strategies, which included, for example, extra communication about house management around major holidays and big regional events like the Mt Isa Rodeo, which every year attracts extended family from around the state.

No single solution works for every community of residents but “where things work, housing is worked out locally” and that can include a range of adaptations and innovations, he says.

Professor Moran points out that while coordinating the interaction between state and federal housing offices, local community organisations and tenants can take more time initially, it will save money by producing better long-term results.

Which is why this survey of working examples of indigenous housing outcomes around Australia should contribute vital information for policymakers and architects and help reduce indigenous disadvantage.

Aboriginal and Torres Strait Islander people comprise:
- 2.5% of the population.

- 28% of homeless people (Recent national data from homeless services records that 22% of clients are indigenous.)

- 25% of all indigenous households (or income units) in the private rental market, were receiving Commonwealth rental assistance.

Indigenous use of housing programs

Andrew Bock is a former full-time journalist at The Age newspaper and now a freelance journalist for major daily newspapers and national magazines. 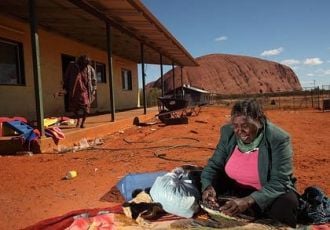