Donald Trump moves into the White House on Friday, January 20, leaving behind his beloved $100 million penthouse condo in Trump Tower.

Monocle’s New York bureau chief Ed Stocker took a stroll down 5th Avenue to examine the 58-storey building and share his view on Trump’s home and its place within American society.

“Nothing perhaps sums up Donald Trump’s inflated sense of self and infatuation with his phallus quite like Trump Tower, headquarters of the New York moguls property empire and the location of his penthouse home,” Stocker says in the podcast Tall Stories 32.

“Trump Tower is everything you might expect it to be and possibly more. Billed as New York’s first luxury skyscraper, yes by Trump himself, it was completed in 1984.

“Despite a $100 million penthouse condo that so obviously removes himself from 99% of the American population somehow Trump managed to win the US election promoting himself as a man of the people.”

Stocker describes the design by architect Der Scott as “unusual”.

“The frontage is jagged and stepped in order to increase the number of windows in the building,” he said.

“The lower levels have planted outdoor terraces with trees, while the very top of the skyscraper features seven spiky triangles pointing towards the heavens.”

But Stocker says it’s the inside of the building that Americans have become accustomed to with Trump’s reality TV series The Apprentice filmed in Trump Tower.

“Those interiors do feel dated and opulent, to say the least, everything is marbled, gold covered and shiny, but it is the $100 million penthouse – Trump’s principal home – that is the icing on the cake,” he said.

“It is quite simply a master class in bad taste, sparkling with precious stones and metals.

“Designed by Angelo Donghia its renaissance ceiling frescos and gilded cabinets are enough to give Louie XIV’s exuberance a run its money.”

Stocker says the usage and symbolism of Trump Tower have changed considerably since June 2015 when the world watched Trump ride his building’s escalator down to a press conference to announce he was running for President.

In the last year and a half, it has become the site of numerous interviews by American cable news journalists obsessed and appalled with the Republican in equal amounts and the scene for protesters.

“Despite the many dramas the building has been through, Trump is clearly attached to the embodiment of his brand,” Stocker said.

“Whether he decides to re-create those interiors at 1600 Pennsylvania Avenue remains to be seen. God help us all.” 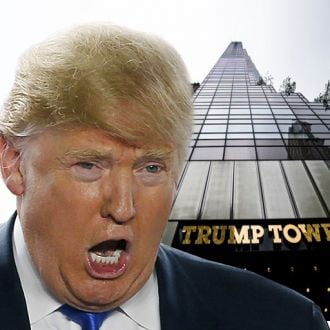