Is it love? Architects meet the Apple Pencil

“Who wants a stylus?” Apple founder Steve Jobs notoriously proclaimed when first presenting the iPhone at Macworld in San Francisco. “You have to get ’em and put ’em away, and you lose ’em. Yuck. Nobody wants a stylus.”

That was in 2007: today, the market is heading towards saturation point for digital gadgets that make all sorts of claims about transforming the old-fashioned relationship between pen and paper.

Most have unwieldy designs, confusing software add-ons and a ‘latency’ issue: the time it takes for the pen stroke to appear on the screen.

But that is widely expected to change in November when Apple releases its first stylus – known as the Apple Pencil – a simple tool that gives users a realistic feel, almost-instantaneous response and the ability to draw light and shade onto an iPad.

Disney cartoonists have tested the device and declare it a winner, and Apple expects it will change the way designers operate – from illustrators and graphic artists through to architects. In fact, Apple’s own online marketing campaign features a sketched elevation image of a home renovation project.

Australian Institute of Architect’s Archicentre general manager Cameron Frazer says while architects are often slow to take up technological changes, particularly smaller-gadget technology, the Apple Pencil could have a real impact on the ease with which designers can record and transmit their ideas for clients.

“Interestingly, many designers still design by hand. There is something about that hand-eye coordination and pencil on paper… But when it comes to the process of taking an idea and turning it into a building, it hits the computer [design software] very fast.”

It means for clients, their architects can benefit from the brainstorming and creativity driving process of using a pen and pencil, but in this new digital form can take sketches and input them into the computer accurately, quickly and effectively, he says.

He says that existing tools such as the Livescribe Smartpen, which allows a user to write notes that can appear digitally on multiple devices, be emailed and stored, and simultaneously record the spoken conversation occurring during meetings, have broader uses for most industries, but for architects it’s about what works best for drawing, not writing.

“Things like tablets and electronic pens have been on the market for some time, but with limited success. The reasons for this could be the way it feels in your hand, intuitiveness and above all perhaps latency.

“It’s been interesting to see project managers and consultants we work with use touch screens and electronic pen technology, for instance, the Microsoft Surface, in meetings far more than architects.” But architects are more “touchy-feely” with their design tools. The natural feel is important, he says, which is why the new Apple Pencil might finally herald a real technology breakthrough.

Mackintosh expects the Pencil may be used more regularly in client meetings, where ideas and concepts can be discussed, then quickly sketched and instantly recorded electronically.

“It can be emailed, or transmitted via whatever portal you communicate through, so it’s more easily accessible than someone’s paper notebook.”

Reports of the new Pencil suggest it has an almost imperceptible grip when used with the new iPad Pro, meaning it feels like a pencil on paper. It allows shading, and like a traditional pencil, if users press harder, the lines thicken and become darker.

“The simplicity and intuitiveness look to be a much better integration of digital pencil and tablet. Most of all for an architect, it looks great,” Mackintosh says.

Frazer says while digital progress in architecture is underway, it is a complex process. The sector was slow to move to computers and design software such as CAD in the early days but the current technology revolution means gadgets are now being adopted faster.

He expects at some stage, paper and pencil could be overtaken by digital screens. But not yet: A1 sheets of paper are still the most common part of building sites around the country.

“The main change in the interface between architect and client so far, beyond the broader digital revolution has been 3D modelling”, Frazer says.

“Everyone is using flythroughs or walkthroughs. The Block and every other renovating show now have them. What will take that even further is 3D virtual reality, where you can put goggles on and actually appear to inhabit the space. That’s not ubiquitous, but it will get there.”

Mackintosh says the same. “It is quite close to being a real benefit to architects and then for them collaborating with clients. You will walk into a room, put on your goggles, and you can all interact with the model, walk around the building, have a look at a window or detail, point to it and then put a note on it in virtual reality.”

For clients, builders and project managers that means it’s not just a novelty. “There will be a lot more certainty about what the real outcome is going to be, and you can fix mistakes before you build it,” Mackintosh says.

With that translating to real dollar savings, it’s hard to argue that the Pencil will change the way designers communicate, but the next technological step to virtual reality is likely to change the entire industry. 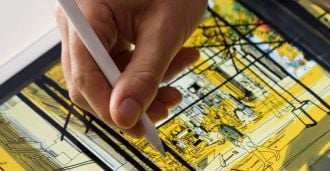