It’s not easy being green

Eugenie Stockmann will never forget the day when her builder called her and said a “massive problem” had come up in her application for a building licence.

She and her husband Helmuth were nearing the end of a two-year approval process to build two townhouses and two apartments on an 837 square metre block in Lathlain, Perth, with a focus on sustainability.

But Stockmann learned on that day about a quirk in the Building Code of Australia (BCA) that meant the attic storage space above the apartments counted as a third storey. The building would have to comply with the same fire safety requirements as a ten-plus storey apartment, meaning they would have to install a complex sprinkler system.

Ultimately Stockmann was able to overcome the problem and get her building licence, but this was one among many planning obstacles that made the process more time-consuming, expensive and nail-biting than it could have been.

“We had to go through a performance-based assessment on whether this particular building complied with the BCA. It was fun.” Stockmann explained with more than a hint of irony at the recent Making Cities Liveable 2014 conference.

In late 2009 the Stockmanns sold their home in Perth’s northern suburbs and purchased an inner city block, together with another couple. Their dream was to build a small-scale inner city living environment that was sustainable, felt like a community, and was “not necessarily the cheapest, but affordable,” Stockmann says. The block is five kilometres from the Perth CBD and 400 metres from a train station.

The Stockmanns wanted to avoid a typical townhouse development involving a long driveway to the back of the property, three townhouses and three double garages. “When you look at [these developments] from the air you can see that all green space has basically disappeared,” Stockmann said.

Their design for two townhouses and two apartments restricts car access to the front of the property, radically reducing the amount of concrete space needed for a driveway.

When the initial application was submitted, council planners recommended it be refused because it would result in an undesirable outcome for the street and the building occupants.

Putting the cars at the front of the property caused non-compliance with council codes requiring garages not to dominate the street, but this was fundamental to saving the loss of green space to a long driveway.

The buildings had to be parallel to the street, even though the property itself is not a perfect square. Complex roof structures were designed to comply with this while achieving passive solar orientation. This increased construction costs and caused more waste from off-cuts.

The sustainable qualities of the design were completely discounted. “In relation to sustainability the simple comment was ‘no impact’,” Stockmann said. “I was pretty gutted when I read that and I thought there is no way this will go through.”

The plans had to designate at least 200 square metres of exclusive-use land for each townhouse, which clashed with plans to include common garden areas including a common outdoor kitchen and barbecue area.

“That means that … our state residential design codes have got a fence mentality,” Stockmann said. “Because we want to see lines on the map where the fences are going to go. If you want to do anything that’s different from that, it’s difficult.”

The Department of Health classified as “high-risk” the intention to collect rainwater for non-potable use, and the plan to disburse grey-water over the garden. The Stockmanns had to apply for exemptions for both of these aspects, which was laborious and costly.

“I never thought that in such a water-challenged state as Western Australia I would have such issues implementing such common sense and simple things as a shared rainwater tank,” Stockmann said.

The Stockmanns ultimately got almost every aspect of their challenging sustainable development through by lobbying elected councillors – a daunting task as they were not familiar with the workings of local government. The process was long and tiresome.

There has to be a better way

There were plenty of other issues to work through.

It was a problem that at least one door didn’t face the street. The doors faced a common courtyard to achieve a sense of community and passive surveillance. The different shape and height of the buildings, compared to others on the street, came up in the approval process.

The two apartments had to be reduced from two bedrooms to one bedroom due to state residential design codes. And the common garden shed and bike storage didn’t count towards exclusive-use storage requirements.

Ultimately the project took three and a half years, including two years for approvals.

In the final outcome, one building achieved a rare ten-star energy rating, and the development won four Housing Industry Association (HIA) Greensmart awards including 2014 Home of the Year.

Far from being an “undesirable” for the other residents in the street, the development has sparked interest and conversations among residents about sustainable building and community living.

Since the Stockmann’s experiences, the local council has reviewed some of its policies.

The Stockmanns and their company, The Green Swing, are doing a second development in the same street, and it’s been easier this time.

“The journey has really shown me that even though there are so many people now who would like to build more sustainable, something needs to be done to make that easier,” Stockmann said. “Otherwise we will end up with what I call the cookie-cutter style grouped townhouse developments because that’s the simplest, that’s the quickest and that’s how developers make their money.” 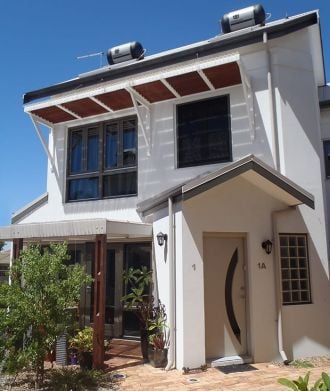