Is the $20 billion medical research fund good news for the property industry?

The health sector has delivered some excellent design projects for the architecture profession in recent years, at a time when the climate in the commercial building sector has been relatively weak. In particular, there has been a wave of new multi-purpose medical research facilities, many of which were at least partially government funded.

Federally-funded construction projects, most of which had come to a close, did not get renewed in the last budget. But the Federal Government’s announcement of a new $20 billion research fund – one of the few sweeteners in the cost-cutting budget – might deliver opportunities for further vibrant projects in this space in years to come.

The fund, which Treasurer Joe Hockey has claimed will be the biggest medical research endowment fund in the world, is expected to swell to $20 billion by 2020 using savings measures in the budget including a portion of the proposed $7 co-payment for seeing a general practitioner. It is expected to make its first distribution of $20 million in the 2015/16 financial year rising to $179m in 2017.

Because this represents a massive increase in Commonwealth research funding, the property sector is hoping that some of the funds will be directed to facilities in which that research can be undertaken.

Multi-purpose medical research facilities are a relatively recent phenomenon. Previously, research was largely carried out at university and hospital facilities.

“Over the last five or six years there has been a pretty big round of research centre development – a lot more than the preceding decade,” says Timothy Hibbert, project manager for research firm BIS Shrapnel.

Some have been attached to new hospitals, such as the new Royal Adelaide Hospital building, while others have been jointly funded by universities, government and the private sector.

In recent years, Hames Sharley has designed two new buildings for the Harry Perkins Institute of Medical Research in Western Australia. These projects were built with the help of commonwealth and state government funding.

James Edwards – a Hames Sharley director who leads the company’s Tertiary Education, Science and Research Portfolio – says these buildings are designed in a completely new way that makes them flexible and adaptable.

“To improve research outcomes there has been a growing focus on improving opportunities for interaction and collaboration, and that’s meant building flexible, adaptable facilities that diverse universities and research groups can move into and occupy in a more fluid, collaborative way,” Edwards says.

“They are not designed around the needs of a particular department or institution. They are basically tenants in the building, operating in generic space, and people apply for that space based on the research they are doing and grants they receive. That’s quite a new development.”

Despite the surge of recent building, Edwards believes more capacity will be needed, particularly as research from the new fund notches up.

There has been a lot of attention on translational research with a “bench-to-bedside” approach. He believes the next big push in medical research could be in the area of commercialisation and in mental health, neuroscience and brain disease – particularly as the Australian population ages.

“There are a lot of medical research buildings around the country now looking at diseases like cancers, respiratory diseases and skeletal diseases. But there isn’t much investment in looking at mental health disorders, and mental health counts for an extremely high disease load in terms of the national population,” Edwards says.

A commitment from the government to focus on diseases like Alzheimer’s could be very significant for the health community, Edwards says.

Additionally, there will be growing opportunities for the commercialisation of medical discoveries and a demand for bio-incubator space and clinical trials facilities. This is a great opportunity for private sector involvement.

Few details have been given about where the money from the health fund will go, and whether it will include a capital allocation for increased research capacity or infrastructure.

“Capital projects could be included and that would make some sense based on the past,” says Stephen Duckett, health program director at the Grattan Institute. “In recent years there’s been significant Commonwealth government investment in research buildings. And obviously there’s always the need for new research facilities and capacity, so it’s not out of the question that could be part of this fund.”

A strategic review of health and medical research in Australia led by CSIRO chairman Simon McKeon and released in 2012 included a recommendation for the establishment and funding of 10 to 20 “integrated health research centres” over time. These would combine hospital networks, universities and medical research institutes.

For those involved with the health and research sector, any additions to the dwindling pipeline of work would be welcomed. “My general impression is that the profile for health buildings should fall off quite a bit over the coming year,” Hibbert says. “You look through all levels of government and they are cutting back on various kinds of capital expenditures.”

Whether the pipeline will turn around with the medical research fund remains to be seen, Hibbert says. But for the design and construction sectors, a flow of such complex projects will help to soak up capacity created by the conclusion of other federally-funded programs. 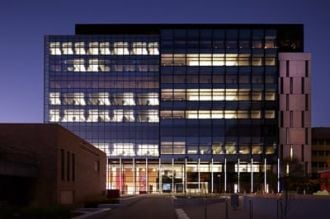