Global corporate behemoth The Walt Disney Company made Australian headlines recently when it picked up the naming rights for the Melbourne stadium currently known as The Etihad. From September 1st the venue will be known as Marvel Stadium, after one of Disney’s growing number of movie-studio divisions.

A media statement from Melbourne Stadiums Limited CEO Michael Green made assurances that the deal wouldn’t ‘Americanise’ the venue and would include a new 50sqm Marvel store. Green also stressed that half-time entertainment at AFL matches would remain the same, though signage and advertising around the scoreboard could change.

Naming rights of stadiums has been a hot topic of late. Perth Stadium’s deal with Optus, for example, has drawn criticism from state opposition leader Colin Barnett for dropping the ‘Perth’ – and thereby losing a branding opportunity for the city itself.

But such naming rights are by no means a new thing; similar deals have been taking place for more than a century…

One of the first examples dates back to 1911 – Boston’s iconic Fenway Park. The owner of the Red Sox baseball team, John I. Taylor, was looking for locations to build a new venue, so his father bought 34,000sqm of land in the Boston neighbourhood of Fenway-Kenmore. In September of that year work began on Fenway Park, and while Taylor claimed that the name was inspired by the location, many suggested that it actually promoted his family’s company, Fenway Realty. Stadium branding was born.

Just over a decade later, the owner of the Chicago Cubs, William Wrigley (of chewing gum fame) called his team’s stadium Wrigley Field. The name remains world-famous today, not least for the venue’s iconic vintage signage, but despite the perceived branding, the baseball franchise receives no money for maintaining the name. Indeed it has been a matter of some controversy that the team has passed on the opportunity to take on a new sponsorship deal that could earn it tens of millions of dollars annually. In doing so, it appears the Wrigley Field name has graduated from branding exercise to untouchable tradition.

Today, it seems that there is a growing acceptance of sports grounds taking on the brand name of a sponsor – if the venue is new. If it isn’t, there tends to be a notable push-back from patrons. An example of this can be found in the stadiums of the richest sporting competition in the world – the English Premier League. Of the 20 clubs that competed in the recently completed season, exactly half play their home matches at a venue that has either been built or significantly redeveloped in the past 20 years. Of these 10 stadiums, seven bear the name of a sponsor. Of the other half of the clubs – those that remain in their historical homes – none have taken on naming sponsorship. The three outliers have new stadiums with no sponsorship deals in place: Southampton, West Ham United and Tottenham Hotspur.

Initially, the money men at Southampton wanted their ground to be named purely after the sponsors, but fan pressure influenced the decision to opt for a non-commercial title instead. In 2006, new sponsor Flybe.com chose not to purchase the naming rights to the stadium, which reverted to the name St Mary’s Stadium after a brief dalliance with being known as The Friends Provident St Mary’s Stadium.

West Ham, somewhat controversially, became major tenants of London’s Olympic Stadium after the 2012 games and at the time of publishing, the club is still actively seeking a sponsorship partner. Under the terms of the club’s 99-year lease, West Ham will receive 40 per cent of the revenue from any naming rights sold. Tottenham will soon move into its new stadium on the site of the team’s traditional home at White Hart Lane, and a sponsor’s name is expected to adorn the outside of the building by the time the new season kicks off.

Fan disapproval of rebranding historic stadiums was highlighted at Newcastle United. In 2011, the club owner, Mike Ashley, attempted to change the traditional name of St James’ Park to that of his own business. His reasoning behind calling the ground the Sports Direct Arena was that it would be a temporary measure to “showcase the sponsorship opportunity to [other] interested parties”. According to Ashley, the St James’ Park title was dropped because it was not “commercially attractive”.

The stadium’s renaming caused considerable alarm amongst the club’s fanbase, some of whom began criminal damage actions to preserve the stadium’s previous name.

In 2012, payday loan company Wonga.com became Newcastle United’s main sponsor and purchased the stadium naming rights. Recognising the potential for disenfranchising supporters even further, they subsequently announced that the name St James’ Park would be restored as part of the deal.

On Australian shores, we have more than 70 stadiums and ovals with brand names attached, and in the commercial world in which we live that figure will surely continue to grow. But as our new venues take on brand names it would seem that some venues, at least, are untouchable. For every Optus and Marvel, there’s a traditionally titled Adelaide Oval or the MCG… and it’s hard to imagine anything changing their names. 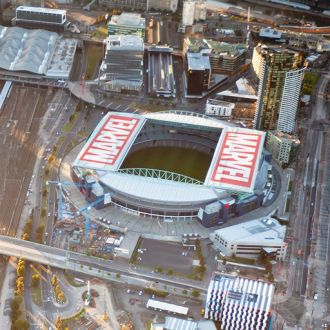