Networking is key to success for Graduate Architects

Multi-award winning graduate designer, Danni’elle Jenkins, has proven that hard work and relationship building is the key to success for young people looking to get into architecture.

Starting out as an intern while still finishing up her undergraduate degree in architecture at Charles Darwin University, Danni’elle is now working full time in Hames Sharley’s Darwin studio, as an essential cog in the wheel of the small, yet flourishing, Northern Territory team.

“The great thing about being at Hames Sharley, and in such a tight-knit office, is that I’ve been able to try a bit of everything,” Danni’elle said.

“We have four designers and an office coordinator in the Darwin studio, so I can just spin my chair around and ask anyone a question any time of the day – everyone is really open and willing to share their knowledge, so it’s been really easy for me to learn.”

Growing up in the rural Northern Territory town of Pine Creek, a couple of hours drive from Darwin, Danni’elle moved to Queensland’s Gold Coast to attend boarding school in year 11 and 12, but after graduating high-school, the comforts of home unexpectedly beckoned.

“I was originally going to stay in Queensland and study fashion at university, but I came up and did a gap year at Pine Creek to earn some money and decided to find something a bit closer to home,” she said.

“After having a good look at the courses available in Darwin, that might utilise my creativity, I decided to do architecture and ended up really loving it.

“I started at Charles Darwin University in 2013 and joined Hames Sharley in October last year, just before I graduated – I was just looking for some work experience for a few weeks but one thing led to another and they hired me.”

But the young architect isn’t stopping there. Determined to undertake her Masters Danni’elle is using her current role at Hames Sharley as a stepping stone into further study.

“My initial reasoning behind getting an internship was to better prepare myself for taking on my Masters – a lot of people had told me that it’s good to have a year of experience before taking on further study, so I wanted to get a head start,” Danni’elle said.

“I also wanted to learn Revit, which is one of the main programs we use in the industry and isn’t something you learn at university.

“I’m thinking in the next year or two I’ll have to go to Brisbane to do my Masters – as they don’t offer it in Darwin – but I’m hoping I’ll be able to transfer to Hames Sharley’s Brisbane office so I can continue getting practical experience while studying.”

Working on everything from planning submissions to major projects with senior designers, Danni’elle says she’s now not only proficient on Revit, she’s also been exposed to a number of design fields: from interior, to architecture and urban design.

“I love it all, so I still haven’t decided what direction I’m going to go in – which is another reason why I’m interested in doing my Masters,” she said.

“It’s great being in a small office because I get to be creative and come up with designs and ideas with the senior designers – we all work quite closely too, which has been fantastic for my development.

“I’m lucky that I get to touch every project that comes into the office,” she said. “I’ve worked on the Gateway project, the Darwin Esplanade Boardwalk which is a big one, as well as a couple of smaller health projects for local hospitals – I’ve also been working on an interpretive display, so there’s a real mix.”

Danni’elle’s tenacity and hard work have been recognised not only by Hames Sharley, but also by the industry, with two recent awards honouring her achievements – the Australian Institute of Architecture (AIA) NT Student Award, and the Peter Fletcher MODE Design Prize for Outstanding Academic Achievement in Bachelor of Design.

“I have no idea how it all came about but it’s great to be recognised for my work and interest in the industry,” Danni’elle said.

So what’s Danni’elle’s advice for graduate architects looking to get a job straight out of university?

“My advice to any other students or budding architects out there would be to work hard at it and ask a lot of questions, there’s no such thing as a silly question.

“Getting involved in the architectural community through industry events is also a great way to boost your career prospects. I was lucky to get a job, but I made sure people knew my face while I was at university – networking and being out there in the community has helped me a lot.

“Teamwork is also really important, some people are competitive at university, but you just need to be your best and learn to work well with others – I realised this when I got into an office environment, it’s no longer just about you, it’s about working together to achieve a common goal.” 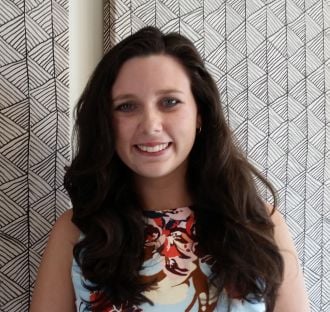