Creating a team environment where every stakeholder is able to contribute the maximum value to a project is no easy task.

Skilfully harnessing the contributions of the many student stakeholders, Guild staff, university staff, designers and consultants for a new student collaborative facility, the success of Hames Sharley’s collaborative design process was exemplified in a recent project that faithfully reflected the aspirations and ideas of their partners.

The Student Guild at The University of Western Australia engaged Hames Sharley to re-design the first floor of the central wing in its 1970s building, for the Guild’s new Club Collaborative Zone.

The result was the creation of a highly functional and adaptable physical space to support collaboration and interaction amongst the many student clubs and associations the Zone houses. Nothing like it existed before and the innovative design has been enthusiastically adopted.

“The original building provided a series of individual rooms and offices accessed off a long dark and uninspiring corridor that had no natural light,” Brigid said.

“The initial consultation quickly showed that the space was totally unsuitable and just wasn’t being used, so we needed to encourage utilisation with our re-design”.

“At the time, the Guild was made up of nine multi-disciplinary groups which governed over 120 clubs, departments and societies – so our role was to work closely with the representatives of each group to ensure it was a space that suited diverse needs and could be utilised by everyone.”

In order to ensure the space met the needs of stakeholders, regular design meetings were held at the Guild where Brigid and her colleague Dean Symington (Hames Sharley Associate) would deliver information on the design for further deliberation and iteration.

The designers then used a student-friendly smartphone online voting app to engage with users, identify priorities and seek approval on design decisions.

“Before beginning the design process in earnest we engaged the students in workshops to establish what they required for the space – from this, it became clear that there was strong support for shared facilities and collaborative areas, rather than individual club rooms,” Brigid said.

“Throughout the process, we presented options to the Student Guild for every major design decision, which we’d send out via a Google online poll for voting – so it was an incredibly democratic and responsive way of designing.

“From the initial concepts for the use of each space to the furniture selections, we involved the students in everything – at one point we invited a large group to our office to try over 40 different types of chair, and recorded their feedback to make the most appropriate selections.”

And while it sounds like a complex process, Brigid said it was the only way she could ensure that the space would be used, and loved, by the entire Student Guild.

“I don’t think we could have done it any other way. It’s a very successful Student Guild with motivated and informed members, and we really worked hard to bring everyone in on the process and to get broad buy-in,” she said.

The students were the client, and, to ensure that they felt in control of the process, we used communication strategies that best suited them – such as the online voting system.

Identifying the key objectives for the space, as a place to “socialise, meet and work”, Brigid then workshopped a concept with the students to base the design around.

“The fundamental basis of the concept was the idea that everyone using the space was on their own journey through the University, and this space represented a junction where paths crossed and met,” Brigid said.

“Based on this, we came up with three design options and asked the students to vote on their preferred choice. The approach that gained the most support became known as ‘The Path’.

“The students were also adamant that they wanted a sophisticated approach to the design which was in keeping with the University, rather than something that would date quickly.

“The result was a restrained and practical palate, using limited pockets of colour that referenced student hub branding for pin boards and quiet areas. The path became a major feature of the design, and the use of dark charcoal really emphasises this within the space.”

The meandering path runs unbroken through the space, linking different zones, moving from floor to ceiling via joinery and walls, continually connecting, and leading to the centre of the space and the collaborative heart of the facility.

All internal walls and ceilings were removed to create large open spaces, and part of the external wall was replaced with full-height sliding glass doors to maximise cross ventilation and natural light.

“We recycled jarrah from the existing space and re-used it throughout the new fit-out,” Brigid said. “We also kept and refurbished the original 1970s jarrah window frames – this was particularly successful as the aged natural wood adds warmth to the space.”

The resulting design not only impressed the Student Guild – with its increasing membership now actively using the Club Collaborative Zone – it was also recently recognised with an Australian Institute of Architects’ award for Interior Architecture at the 2016 WA Architecture Awards.

“It’s tremendous to see the UWA Student Guild Hub honoured with such a prestigious award,” Dean Symington said. “Especially in light of the considerable field of high-quality competition that the project was up against.”

And Brigid couldn’t be happier, not only because of the award, but also because of the way the students have taken ownership of the space, and the evidence that the hub has really created a place to ‘socialise, meet and work’ for over 130 student groups.

“We are incredibly proud that the project has been so well received, and this award is a great testament to the success that can come from a truly collaborative relationship between a willing and engaged client, a sensitive and passionate designer, and the people that use the space – in this case, the students of UWA.” 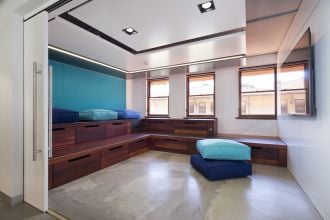