Olympic Stadium gets a facelift

While all eyes are on Rio right now, Montreal is also remembering its fleeting time on the global stage – and the debt and controversy that came with it – as it celebrates 40 years since it hosted the games in 1976.

Veiled in controversy the city’s Olympic stadium, the ‘Big O’, has long been referred to by locals as the ‘big owe’, due to memories of debt, corruption and embarrassing construction delays, which almost cost Montreal the Olympics.

But the Big O is finally being given a new lease on life according to CityLab.

“In 2011, a committee studying the future of the Olympic Park issued a report with a number of recommendations about what to do with the site. Far from promoting demolition, as other studies have, it found that Montrealers wanted to preserve and improve the site,” Laura Bliss from CityLab writes.

“A renovation campaign led by the park’s management agency has injected $7 million into a revamped esplanade outside the stadium, and $5 million into the tower, which now has state-of-the-art outdoor lighting and a spruced-up observatory.”

“Since that work kicked off in 2012, the park has hosted hundreds of events each summer, including one-off baseball and soccer games, outdoor concerts, food truck gatherings, and extreme sports festivals.”

And the renewed purpose has brought with it a new, more accepting, perspective among locals too.

“We’re getting proud of it,” Claude Lizotte, a 66-year-old Montreal native, told CityLab earlier this month at a celebration of the park’s 40th anniversary.

“Even though we’re not happy with the cost of it, with time, you kind of forget that.” 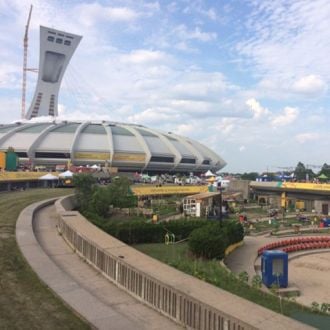