Time to throw away the measuring tape

Hold the phone! An app that can generate entire floor plans with the simple touch of a phone? There must be a catch.

Well, according to Architizer, Locometric’s recently updated RoomScan Pro will put any well-meaning measuring tape into retirement, with its easy to use features that allow you to automatically generate a floor plan for any room, by simply ‘holding your phone’ to each wall in a designated space to calculate its dimensions.

While the RoomScan Pro has been on the market for a few years now, it was named “App of the week” earlier this month by Architizer because of its “powerful new features” which only became available in late June 2016.

Receiving generally positive reviews for its ease of use, initial feedback from architects indicated that due to its slight lack of accuracy (with measurements estimated to the nearest 10 centimetres) it would not be sufficient for anything more than feasibility studies.

Taking this feedback on, Locometric has produced a High-Precision mode for the app, which allows users to check their measurements using a laser measurer for improved accuracy.

Additional updates to the app include new features that allow the user to measure and draw stairs, and scan and draw a building’s exterior, including gardens and yards.

The updates also allow users to orient their drawings to interact and align rooms with each other.

“It’s a great tool that takes a lot of the grunt work out of the otherwise tedious and time-consuming task of surveying existing buildings by hand,” Architizer said.

Read more about the RoomScan Pro at Architizer. 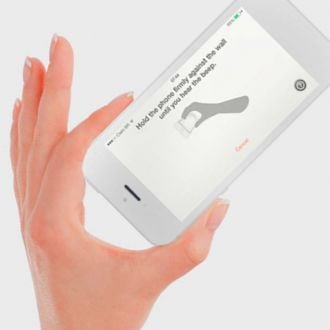