Save my soul: refurbishing a heritage listed building

Architectural character is created by the aesthetic components of the building, such as unity, composition, contract and scale.

But what gives it soul?

It might be the way light and shade dance off the internal surfaces, or the way structural features invite us in. It might shine through the interior fit out, the materials, inducing an emotional response from the user. Or it might be the voices of a bygone era silently echoing through the corridors and whispering off the walls, inviting users to become a part of the story of the building.

How do buildings retain their soul throughout decades of use and multiple refurbishments?

Rowes Arcade is a wonderful example of a historical building in Brisbane’s CBD which has undergone several changes throughout its lifestyle, yet maintains its soul. It is also home to the Hames Sharley Brisbane Studio.

“Everything about this space screamed ‘inviting’,” says Melissa Hughes, Associate at Hames Sharley Brisbane. “The 3.6 ceiling, enormous windows and open floor plan drew us in from the get-go. It was a space that allowed the old soul of the building to shine through. As a team, all we had to do was to build upon the feel that already existed within the space, and add our story to that.”

The Hames Sharley team delved into the history of Rowes Arcade to find out about its past before deciding on the future of the design for their studio space – in order to embrace the past and bring it into the present.

Rowes Arcade – known initially as Rowes Building – was commissioned along with its neighbour the Rothwell Building in 1885 for Thomas MacDonald Paterson, a solicitor and Member of Parliament, for use as office space on the ground floor and warehouses in the floors above. The space now occupied by Hames Sharley was part of the warehouse space and would have been bustling with activity in its early days.

The Edward Street building was reinvented as a social hub throughout the first half of the twentieth century after Rowes Café moved into the ground floor. Clientele would have entered past doormen into the cavernous 380 seat dining room, their happy banter resonating off the walls, whilst upstairs feet danced to the sounds of a big band in the ballroom, an iconic venue in Brisbane’s hospitality scene.

In 1958 the building’s personality was redefined when the building changed hands and underwent conversion to become Rowes Arcade, further redefining both the use and users of the building. The use of space, the sounds and the smells were vastly different to those in the previous era, affecting the soul of the building again.

After several decades housing a retail arcade, the heritage-listed building received a refresh in 2014 along with a tranche of exciting new tenants including high profile Jamie’s Italian. It was during this period that the Hames Sharley team undertook the refurbishment of the studio space.

“The Rowes Building has good bones which have allowed the occupants to transform its identity through adaptive reuse over its history, and our studio space is another iteration of this,” says Melissa.

The Hames Sharley Brisbane team sought to keep the approachability they felt upon first entering the studio space. From the threshold to the furthest corners, the studio invites you in to interact with its spaces and its people.

The design team worked closely with the Department of Heritage and Planning to ensure that original features remained true to history whilst creating an approachable space that adheres to modern work practices of collaboration and adaptability.

During Open House Brisbane on October 7-8, the studio space will be available to members of the public to come and experience this interesting part of Brisbane’s history.

“We hope that visitors will engage with our contemporary workspace and feel the soul of the building,” says Melissa. “History buffs will have a chance to read about the Rowes Building, and architecture followers will be able to see what our Queensland studio is working on and what drives our creativity.”

The Hames Sharley team will be on hand to welcome you, answer questions about their work on this and other projects, and kids will get a chance to dabble in designs of their own.

For those considering a career in architecture, interior design or urban planning, our team will be available during Open House Brisbane to talk about their profession and answer any questions. 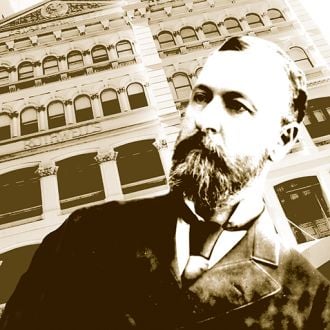