They popped up overnight, like mushrooms – 140 concrete blocks placed in strategic points around Melbourne as a response to January’s terror attack on Bourke Street. The idea behind them was simple and sensible enough: it’s difficult to drive a speeding vehicle into a crowd when there are heavy, solid objects in the way. Immediately, risks are reduced and people are safer.

What no one really counted on was that most people would hate them.

The blocks – which look, for want of a better comparison, like disembodied heads from Minecraft characters – have been variously described as “unsightly”, “visually unappealing” or just plain “fugly”, with the general consensus that ruining the aesthetic of the city is too great a price to pay for increased security.

The Victorian Premier, Daniel Andrews, was at pains to point out that the bollards are only a temporary solution, but within days the backlash had begun. One man created colourful covers for the bollards, using offcuts he had lying around after making costumes for Pride marches; another applied stencilled art to the concrete, while still more embarked on a glitter-bombing campaign. Suddenly there were dozens of expressions of creativity on show – “boll-art”, as it quickly became known – all bent on turning the eyesores into something more in keeping with the city’s liveable reputation.

Now it may seem rather ungrateful when the powers that be implement measures to keep you safe if you then bemoan the fact that those measures aren’t pretty enough. To be fair, though, the voices of dissent make a good point. By turning our cities into fortresses of reinforced concrete, are we not, in a very real way, giving terrorists what they want – the disruption of our way of life?

Of course, there is an argument that it’s not just enough for a city to be safe, it has to be seen to be safe – a clear and present deterrent to anyone wishing us ill. However, the flip side of the argument was eloquently expressed in 2010 by Ruth Read, the then-president of the Royal Institute of British Architects: “It is important that our built environment continues to reflect that we are an open and inclusive society and that in interpreting these new requirements our buildings do not convey that we are driven by security measures.” Taking the idea a step further in her 2014 paper Visible Counterterrorism Measures in Urban Spaces – Fear-inducing or Not?, Anja Dalgaard-Nielsen posited that in-your-face security can actually engender feelings of anxiety and, yes, insecurity.

The solution must, therefore, be to embed any security measures into the streetscape itself. As The Chicago Tribune’s architecture critic, Blair Kamin, said in 2006, “It’s not really security planning at all. It’s city planning.” And in the ideal situation, deterrents would be implemented while a project is still on the drawing board. A good example of this is the Devon Energy Building in Oklahoma City, which was blighted by truck bombs in the 1990s. At the street level, these offices feature planters filled with greenery and an enormously impressive decorative pool that treats passersby to reflected images of the building and the sky above it. All of these elements are picturesque but were designed very deliberately with security in mind, the pool preventing direct access by vehicles and the planters concealing sturdy barriers. Take another step back, and whole precincts can be visualised with this in mind. The Cabot Circus shopping centre in Bristol, UK, was planned down to the positioning of the streets themselves: all thoroughfares leading into the main precinct were consciously misaligned with each other so that it is impossible for a vehicle to get a direct run at it.

Assuming, however, that the streets already exist and it’s not possible to go right back to square one, the solution must be that of basic camouflage. Street furniture, planters and works of public art, much in evidence in cities like London and Toronto, are an obvious approach, breaking up the landscape to prevent vehicular access while at the same time offering utility and decoration.

At a most basic level still, you can simply make bollards that are better looking. Examples of decorative bollards the world over include everything from sculptural granite spheres to carved animal heads and metal posts shaped to look like old-fashioned door keys ‘unlocking’ the pavement. As a response to the terrorist attack in Stockholm earlier this year, three-tonne concrete lions are planned to close off the pedestrian precinct of Drottninggatan, with 40 smaller lions dotted around to make it impossible for vehicles to build up much acceleration.

But the most perfect of security measures must be the ones that function on multiple levels. Take NoGo, for instance, the structures placed on New York’s Wall Street following 9/11. NoGo’s vehicle obstructions take the form of polyhedral brass nuggets, some of which glow from within – on a basic level, they look good. Aside from this, however, they have come to serve a third, different purpose, acting as impromptu benches. “People do what they always do when you offer them a place to sit,” remarked Blair Kamin. “They sit. They sun themselves. They read the paper and gossip.”

Where before the street was a simple means of travelling from point to point, this particular spot has become a meeting place for the working community – not only has NoGo provided security in a concealed, decorative fashion, it has taken things a step further and activated a streetscape that was previously unused for this purpose.

And surely this is the ultimate response to terrorism – not just to implement measures that hinder or prevent the terror agenda, but to implement them in such a way that they make our streets even more liveable than they were, to begin with. As a message to terrorists, it couldn’t be more clear – not only will attacks not undermine our way of life, they’ll provide opportunities for us to enjoy our streets all the more. 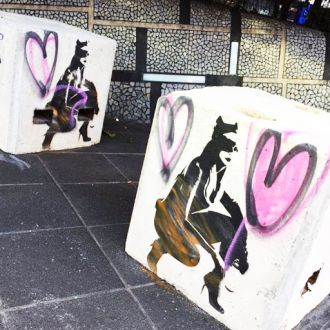