In our recent article The future is (virtually) here we offered a potted history of the virtual reality industry, from its crude beginning with the stereoscopes in the nineteenth century through to the latest mind-blowing investments by many of the world’s largest organisations.

As a multi-disciplinary design practice, Hames Sharley has known for some time that this technology would become a real game-changer within our sector, and so we have carefully monitored the advances in the technology.

Having done our due diligence, we have settled upon HTC’s VIVE hardware, coupled with Enscape’s Real Time Rendering plug-in, to bring our architectural wireframe models to life.

Since we initially invested in VR hardware, we’ve been surprised by some of the advantages that augmented reality can offer our designers and clients.

We expected people to be impressed by VR, but not so overwhelmingly! Many users are giddy with excitement when first exploring our designs. It’s a common sight to see people at Hames Sharley ‘playing’ with the VR kit because it’s fun, and clients whose buildings have been given the VR treatment unanimously agree with them. This month, one of our partners in the retail sector was so impressed they bought their own kit to run our models on.

The immersive environments that VR creates allow users to experience places and buildings on an entirely different level. Unless you have the experienced eye of an architect or an interior designer it may be difficult to visualise, say, the height of a ceiling or the finishes on a building’s façade. VR changes all that. Now clients can step into the augmented reality of our designs and so make confident and more fully informed decisions based on their experiences of walks or flights through the virtual realm.

Drawings and renders never give a true sense of the journey from A to B within a building – but VR provides this before the plans are even finalised. What was previously a laborious task of rendering a constrained number of views to establish limited sight lines has now opened up to the infinite possibilities of a truly spatial experience, one that can be navigated with the mere tilt of the head or wave of the hand.

As VR technology has developed, texturising has improved so we can now alter the lighting within models to mimic specific times of day. This tells us where shadows are cast and which part of the proposed building will capture the most daylight at any given moment.

Light is a critical element in building and virtual reality allows our architects to maximize, soften and manipulate it to enhance spatial qualities such as texture, tactility or volume.

It’s not just our clients who benefit from virtual modelling; our partners in construction do too. Where before two-dimensional representations required considerable time and effort to assimilate, there is now an intangible ‘X Factor’ created by a fully immersive VR experience that allows builders to quickly understand the objectives for a building.

After an initial investment in the VR kit, we’ve found the costs have been far outweighed by the benefits. Virtual models are faster and considerably less expensive to produce than traditional architectural models and provide additional sensory advantages compared to more limited physical models.

The only disadvantage we’ve found in using VR is that our meetings now tend to take twice as long while we wrestle headsets off excited clients! 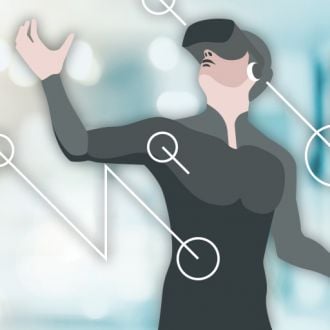