Sport and The Arts - When women are equally paid and sponsored, their activity equally covered and viewed, and their professional accomplishments and status equally celebrated - gender parity is more likely to be achieved.

Sport is one of the most powerful platforms for promoting gender equality, empowering women and girls. However, gender equity in sport isn’t just about providing participation for both males and females; it’s about treating everyone fairly and providing opportunities for all, at all levels.

Working as a graduate of architecture in our Adelaide office, Madeleine Steele is an avid supporter of gender equality and is passionate about equal rights, equal pay, and equal recognition, particularly in the context of sport. Reflecting on her own experiences, Madeleine believes that sport has been an invaluable part of her progression as a young professional and would love to see women given more opportunities to flourish in both fields.

Being involved in competitive sport for as long as she can remember, Madeleine began competitive cycling in 2012 and has since competed around Australia, in the USA, and Asia. Most recently, she signed up to play her first season of AFL with her local club, giving her a unique perspective in two traditionally male-dominated sports.

Through this involvement, Madeleine has become acutely aware of the barriers women face in participation, opportunity, and equal remuneration. She recognises that change has already been achieved through the hard work and determination of her peers but reinforces that more work needs to be done to achieve complete gender equality in the field of sport.

So, what needs to happen to achieve gender equality in sport?

Firstly, Madeleine feels we need to recognise the profound issue that we need women’s participation in sport. By the age of 15, half of Australia’s young women have quit sport. “This is not good enough,” Madeleine declares. “We have huge historical and cultural issues to tackle in this space. There’s a sport to suit everyone and to make everyone feel strong, powerful, and invincible in their skin. We need to do more, to keep women in sport for their health, their social, and their mental wellbeing.”

Madeleine always comes back to the chicken and the egg argument when it comes to women’s sport and striving for equality. “Women need to prove their sport deserves equal pay, opportunity, sponsorship, broadcasting, etc. but without the resources, it is hard to achieve.”

The AFLW is a great example of how a sporting body recognised the need to support a women’s league and made it happen on a fast-tracked plan. They put in the resources first, then watched it flourish. Without this leadership, Madeleine believes it would’ve taken years for AFLW to develop to the level of professionalism it has already achieved in just a few years. Madeleine is excited to see the talent that develops now that young girls have heroes to emulate and follow into the sport. “When we see change at this top-level, we see that grassroots sport flourish too,” she says.

Development pathways in sport are something Madeleine has been passionate about. In her spare time, she manages a women’s cycling team that assists young women to develop in the sport. Butterfields Racing is one of the most well-known names across the Adelaide racing scene. When the team manager of the previous squad stepped down, Madeleine stepped up. The organisation rebranded, recruited new talent, and created a development squad of young women new to cycling. Madeleine says the team has now raced in national level competitions, built its sponsorship base, and recruited even more riders to have a squad of 20 female riders.

Madeleine’s goal for Butterfields Racing is to grow both the competitive and social opportunities in the sport for young women so that it becomes a participation sport, as well as an elite sport. Unfortunately, there is only one clear and well-supported pathway to the world stage – the Olympic track cycling team. Outside of this limited opportunity, the path is difficult to find and often self-supported. A big problem Madeleine noticed was that talented young women, recruited into the sport through talent-identification programs for the Olympic squads, were leaving as soon as they didn’t receive one of the handfuls of scholarships available. “Alternatively, those who received a scholarship were quick to burn out and lose their love for the sport,” she reports.

Another focus of the Butterfields Racing team is to provide strong role models for the young women on the team. Madeleine explains that she deliberately recruits older, wiser team members. “They know their role is to mentor the young, developing riders in both their racing, training, and tactics, but also as well-rounded young women.” The young women in Madeleine’s team, look up to the older riders for both their racing prowess and their professional careers outside of the sport.

In researching for his new role, Tom Hunter, head of women’s football at Richmond Football Club, read that ‘Men need to perform to feel accepted by their peers. Women need to feel accepted by their peers to perform.’ He understood that to get women to perform at their best in his sport, they needed first to believe they were worthy of walking through the door. Madeleine follows, “This to me encapsulates so much about how we should approach the barriers we face in women’s sport but is also a great lesson for everyone trying to further the plight of equality in the corporate environment.” Role models and mentoring in sports parallels with the corporate culture and how we can assist women in excelling in their careers.

At Hames Sharley, Madeleine brings this passion for sport into her work. In 2019, South Australia welcomed a $2.5 million wind tunnel to be built next to the Adelaide SuperDrome, a project Madeleine worked tirelessly to snare for the company for 18 months. Thanks to her long history of participation and advocacy for cycling and women in sport, she took an in-depth and invested approach to the project, which proved a superior outcome. “In the submission, the marketing team decided to highlight my history in competitive cycling, particularly track cycling, to demonstrate my unique understanding of the niche sport,” she reports. The redevelopment will see the SuperDrome become the only velodrome in the world with a wind tunnel and quickly positions Adelaide once again as the cycling capital of Australia, and a global force in the sport.

The future of sport and architecture has excellent potential for Madeleine. She hopes the Wind Tunnel is the first of many in building the Sports and Recreation portfolio in the South Australian studio. For sport, Madeleine will continue to manage the Butterfields Racing team and hope to build the team into being a strong contender on the national stage within the next five years. She is also looking forward to her first season this year with the Golden Grove Football Club. 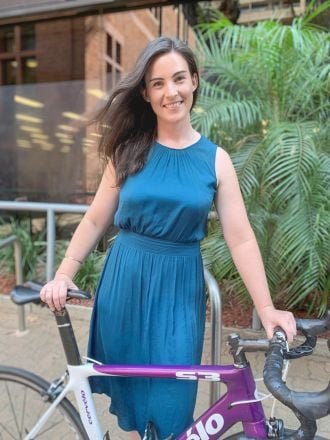