It is the stuff of horror stories. A city signs up to host a world event that will attract tourists, expand infrastructure and boost the economy; instead, the city is left billions of dollars in debt, with buildings that struggle to be repurposed after the fair leaves town. It’s a more common occurrence than you might think – so what does a destination need to consider in order to mitigate against a similar disaster?

World Stage Architecture, as it is sometimes called, refers to structures that are purpose-built for global events such as the Olympics, the World Cup and the World’s Fair. Characterised by monumental designs that create an international spectacle, it has gained media attention recently, particularly in regard to its failures – the buildings that are not ready in time, or the ‘white elephants’ left to rot when the event is over, symbols of embarrassment for the city rather than pride. And, of course, there’s the fiscal strife such constructions can cause.

When building for this kind of global focus, there are two unique and complicated paradigms to consider:

Normally, these pointers are considered to create grandiose sites that will capture the world’s attention, but it is easy to see how they make for a complicated mix… as some cities have found, to their dismay.

Montreal was chosen by the International Olympic Committee – ahead of Moscow and Los Angeles – as the venue for the 1976 summer games, having been the successful host of the World’s Fair in 1967. The Montreal World Fair had broken the record for the largest number of attendees and is still considered one of the most successful events in history. Afterwards, most of the site and its pavilions were reused in an exhibition called Man and His World which was open every summer until 1984; any unused buildings were not intended to last beyond the original event and were dismantled.

The summer Olympics, however, took a different approach and aimed to add permanent fixtures to the city. A new stadium, the Big O, was to be its greatest attraction, but due to unforeseen political issues and a corruption scandal, workers were on strike for 30 percent of the time in which it was to be built. These critical delays left athletes practically running past construction workers as they headed onto the track. Along with factors such as an unexpected rise in the price of steel, this failure to complete in time resulted in project costs running enormously over the $120 million budget – so far, in fact, that the city was still paying the costs 30 years later.

New Orleans goes to the wall; Barcelona builds a brand

New Orleans suffered a more ignominious fate following its hosting of the 1984 World Fair – the only Fair in history to declare bankruptcy. Low attendance rates were to blame, the result, it is thought, of failing to consider its close proximity to the last World Fair (held in Knoxville, Tennessee just two years earlier) and the fact that it would be running concurrently with 1984 Olympics in Los Angeles.

While the Fair was a tragedy, however, the infrastructure commissioned for it was not. The city had a low budget to begin with and planned accordingly, repurposing and renovating old buildings, many of which are still used today in what is now considered the city’s arts district.

Similarly, the Barcelona Olympics in 1992 built up a previously underused coastline, transforming it into an entertainment district full of restaurants and bars, and the result has done wonders for Barcelona’s branding as a tourist destination. The area is still thriving today (although it did take some time for the investment to pay off, with $250 million in debt racked up by the project).

World Stage Architecture doesn’t always result in prosperity. For the 2010 World Cup, South Africa also had the intention of transforming smaller cities into lively hubs. Unfortunately, after the Cup had finished, large stadiums struggled to fill seats, with local soccer teams attracting only modest crowds, compared to the 90,000 people the arenas were built for. In many cases, it would cost more to host a game there than would be received in ticket sales.

Of course, there might be an effort made to repurpose such stadiums, but even they have no guarantee of success: the Mane Garrincha, a relic of Brazil’s 2014 World Cup, is notorious for its failed reinvention as a kids’ party venue. Subsequently, it also failed as a bus station and now stands empty, graffitied and unused; a sad attempt at creating a legacy.

But it is not all doom and gloom. London’s approach to its 2012 Olympic campus changed the game for the better. Key to its success was the use of temporary pavilions, although that did beg an important question: what is the spectator experience like when they’re obliged to sit in temporary structures? Is it lessened by the knowledge that a venue won’t have a lasting cultural impact?

In the case of London’s games, it was the blending of temporary structures with new and existing ones that made the difference. Before the Olympics had finished, plans were made to repurpose the infrastructure that would remain standing into destinations that both fit with the pre-existing culture of the city and conveyed pride over the city’s part in the Games. Examples included renaming the Olympic Park as the Queen Elizabeth Olympic Park, and establishing the Legacy List Charity, which supported the legacy of the Olympics through commissioned art, education and activities held throughout the park.

For the upcoming 2022 World Cup in Qatar, the plan is to build a ‘modular’ stadium made from recycled shipping containers. After the World Cup, the vision is for these containers to be deconstructed into smaller segments, and even reconstructed elsewhere, doing away with a stadium that’s too large after the main event.

The key to success seems to lie in having a long-term strategy for how the site will be used after its primary purpose. Permanent facilities need to be sustainable in every sense of the word – they should neither amass large operating costs nor be useless after their primary use is completed. Repurposing existing facilities might also be a more viable and cost-effective option; even building something temporary might be a better solution. Ultimately, any architectural graveyards that remain after a major event leaves town are simply the result of buildings losing their context. 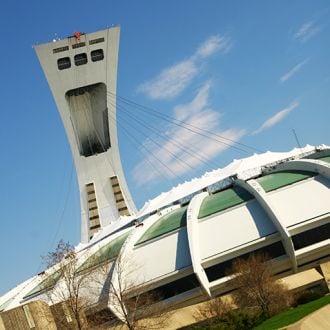