The architects of remembrance

War memorials are an essential part of the Australian landscape – their beauty, symbolism and the quality of materials and craftsmanship illustrates the respect that communities have towards those who have paid the ultimate price.

War memorials create a legacy and a memory of those who died in war and helps generations to remember, interpret and understand a country’s experience of war and its enduring impact on society.

War is an event that can both tear a country apart and form enduring bonds between its people – so it is pertinent that communities honouring those who fought and died for them are involved in, and consulted when a memorial is built.

Consultation provides important opportunities to develop two-way relationships between those leading the project and the community and involves actively seeking the opinions of interested groups to create a collaborative and positive outcome.

Marcia Conner, the author of The New Social Learning, champions the process of consultation and collaboration as “essential” in informing any community project.

“When you engage with people, you build your own insight into what’s being discussed,” she writes.

“Someone else’s understanding complements yours, and together you start to weave an informed interpretation.”

A good example of this is Australia’s war memorials, which have been built in partnership and consultation with the Australian public since the Great War.

From funding to site choice, design and construction, Australia’s war memorials, are the ultimate shrine to the spirit of the Australian people – honouring those who have fallen and built through the tenacity of the communities they left behind.

Following the Great War of 1914-1918, the Victorian public believed that their debt to these men and women should be recognised by a worthy permanent monument.

In response, The Shrine of Remembrance was conceived to honour the 114,000 Victorian men and women who served and the 19,000 who died in the war.

In the late 1920s and 1930s, while the Shrine of Remembrance was being built, Australia was not merely recovering from the Great War, but the country also faced high unemployment and financial struggles.

But the public appreciation was so great, that the majority of the cost associated with building the Shrine (£160,000 out of a total of £250,000) was raised or promised within six months of the opening of a public appeal in 1928.

The design was selected by a competition among Australian artists and architects and the winner, from 83 submitted, was by two Melbourne architects, Philip Hudson and James Wardrop, who were also returned-soldiers.

The inspiration for the external outline came from one of the seven wonders of the ancient world – the mausoleum at Halicarnassus to Mausolus, King of Caria in South West Asia Minor.

Vigorous debate on the memorial’s form and location carried on for many years, including an idea touted by prominent Adelaide builder Walter Charles Torode for a 30m-high metal and marble monument on Mount Lofty, with an electric car to carry people to the summit.

Following much discussion, a survey of prominent architects selected Montefiore Hill as the preferred location and it was decided that the design of the memorial would be chosen through an architectural competition.

The first design competition was initiated in February 1924, with the memorial location set at the entrance to Government House.

An assessment panel was formed to judge the 26 designs submitted. However, before judging was completed all submissions were lost in a fire in November 1924.

Public pressure from servicemen led to a second design competition in 1926 and a new site was chosen on the corner of North Terrace and Kintore Avenue. The winning entry, selected in early 1927, was submitted by the South Australian architectural firm of Woods, Bagot, Jory and Laybourne-Smith.

The memorial was unveiled by Governor Sir Alexander Hore-Ruthven on Anzac Day in 1931 with an estimated 75,000 people attending remembrance processions and events.

While no soldier is depicted in Adelaide’s War Memorial, the impact of the war on all South Australians is intensely conveyed. The obverse face shows the Spirit of Duty holding an unsheathed sword upright as a cross, calling young men and women in an introduction to war and sacrifice. On the reverse face, the marble relief on the northern side depicts the aftermath of war.

The memorial houses an inner shrine, where bronze panels are inscribed with the names of the 5511 people who died in the war lining the walls.

April 25, 2015, saw Australia commemorate the 100th Anzac Day and it also marked the 10th anniversary of the opening of The Mandurah War Memorial, a Hames Sharley project.

Located on Mandurah Estuary in Western Australia, the design was a result of deep community consultation and a project lead by the local council.

The memorial is an iconic symbol honouring the Australian service men, women and others who died in the conflicts of war. The design features a procession of pillars rising from the water and at dawn, on Anzac Day the rising sun lights up the columns and creates a temporary guiding light to the highest peak of the memorial.

The Mandurah War Memorial is among those national memorials recognised in a new book by Donald Richardson, Creating Remembrance: The Art and Design of Australian War Memorials.

In it, Richardson comments that the monument is “a fine example of the type of memorial that has appeared in the new millennium, concerned less with the commemoration of military exploits than with reflection on broader humanitarian values.” 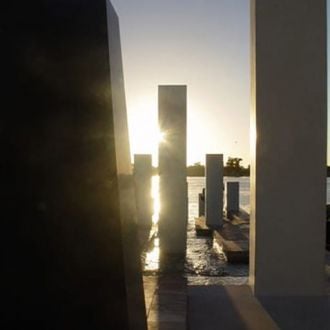