The beauty of environmentally conscious design

While the entries for the Land Art Generator Initiative are only concept pieces, their visual creativity enables viewers to foresee a world where wasteful practices are few and far between, according to a report by Pat Finn in Architizer.

The Initiative is an annual design contest celebrating environmentally conscious innovation in architecture and engineering.

Finn writes that the contest’s tagline “Renewable Energy Can Be Beautiful” is illustrated perfectly by one of the best entries for 2016 – ‘Pipe’ by Khalili Engineers.

The concept proposes a water filtration and irrigation system that would double as a spa-like destination for tourists, to be located offshore in Santa Monica, California.

With desalination a hot topic in California in recent years, due to the state’s water crisis, the Pipe – a 100-percent carbon-neutral mechanism – would transform 4.5 billion litres of Pacific seawater annually into usable water for drinking and irrigation.

Finn describes the chrome design of Pipe as a cross between an aeroplane engine and cigar. He writes that while solar-powered desalination is a 21st-century idea, the aesthetic of Pipe demonstrates 20th-century notions of industry and elegance.

In addition to its role as a desalination machine, Khalili Engineers also envisage Pipe to be an offshore destination for day trips, with visitors enjoying panoramic ocean views from the Pipe.

“Thermal baths of partially salinated water will also be accessible to visitors on the site,” Finn wrote.

The results of this year’s Land Art Generator Initiative will be announced later this month, but Finn is confident that Pipe is in a strong position due to its ability to harnesses the power of not only the sun but also the Earth’s magnetic field. 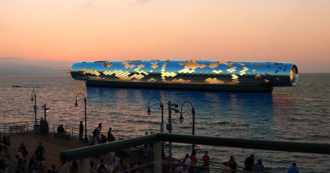