When the wrecking ball took to the RCA/Hoosier Dome stadium – the former home to the Indianapolis Colts – architecture grad from UT Austin, Michael Bricker had a vision for what could be done with the stadium’s unwanted roof fabric.

That was in 2008, and now eight years later, as Jessica Leigh Hester reports in CityLab, Bricker has launched the non-profit People for Urban Progress (PUP) – a group successfully repurposing materials from the stadium, which would otherwise be trashed into shade shelters, wallets and more.

While people dismissed Bricker when he first proposed the idea of reusing the stadium’s roof fabric, he reached out to its manufacturer to learn more about the properties of the material.

In a seven-page document it outlined its characteristics: Teflon-coated, waterproof, UV-blocking fibreglass – in short, it was designed to be virtually indestructible.

In a coordinated effort with the demolition company, about 90 percent of the material was salvaged – enough to span 13 acres.

Portions of the roof were stretched to form standing shelters for local urban farms and parks. In another project, PUP salvaged seats from the Bush Stadium to be installed as local bus stops.

And while repurposing materials is a great idea, Bricker found that the cost of the projects he was undertaking was ultimately unsustainable.

“We did what we could afford to do, which was buy a sewing machine,” he told Hester.

His twin sister, Jessica Bricker, works with the PUP team to make new consumer products, which change based on the materials salvaged from stadiums.

The current inventory includes colourful snap-front clutches and vinyl messenger bags with seatbelt straps out of cars from a local auto shop, with all proceeds passed on to support community projects. 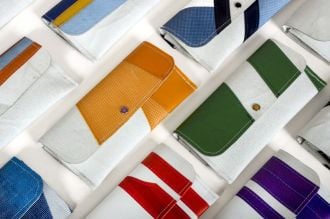