The new ‘3D’ face of architecture

Architects are known for being early adopters of new technology, using everything from computer-generated 3D imagery, to digital animation and virtual reality to better produce and visualise their work.

But with the world touting 3D printing as “bigger than the internet”, how are architects using the new technology to push the boundaries?

Seeing the potential for visualization early, Hames Sharley invested in a 3D printer when the technology first became available in Australia – not only to assist architects with modelling but to also introduce the concept of 3D printing to their national studios, for future building solutions.

A skill that – as it turns out – will become far more useful in the near future than many architects had envisaged.

In an article by Dezeen editor-in-chief Marcus Fairs, in 2013, he introduced the opportunities 3D printing presented to modern architectural studios, not just in terms of visualization, but in the construction of buildings and homes – announcing that “the race to build the first 3D-printed house has begun.”

“Teams of architects in London and Amsterdam are competing to produce the first habitable printed structure, using technology that could transform the way buildings are made,” Fairs wrote.

“There’s a certain amount of scepticism regarding the viability of scaling up a technology that, until now, has only been used to make relatively small objects – objects that do not demand the structural or environmental performance of a house.

“But architects working in this area are convinced it won’t be long before additive manufacturing transforms their discipline.”

Less than a year after Fairs article was published, however, a Chinese construction-materials firm, Winsun, had beat them all to it – with their giant 6.6 x 10 x 32 metre 3D printer assisting in the manufacture and construction of 10 houses in less than 24 hours – all made from predominantly recycled materials, and costing just US$4,800.

While certainly not architectural masterpieces, these houses were the first example of the large-scale capabilities of 3D printers – paving the way for affordable housing solutions in China and around the world.

But for those inspired by truly innovative, beautifully designed, 3D architecture, the world’s first 3D printed office – which took just 17 days to print and two days to construct – is a window into the future.

According to an article by Adam Williams, published in Gizmag last month, the 3D printer responsible for producing the large sections for the Dubai-based office was similar in size to the machine used in China but produced a much higher quality product with less than half of the workforce of traditional construction sites.

“The workforce included a single staff member monitoring the printer’s progress, seven people to install the building components, and 10 electricians and other specialists to handle more technical issues, such as installing the building’s electrical systems, for example,” Williams wrote.

“We don’t know the budget for the project, but the Dubai government says that the labour cost came in at half of what it would be for a building of similar size made using traditional methods.”

But this is just the beginning of what designers, architects and manufacturers will be able to accomplish with 3D printing technology.

Weighing just 21 kilos, the small four-metre-long pilotless propeller aircraft named ‘Thor’ is a glimpse of what is to come in the aviation industry.

Chief engineer Gunnar Haase, who took Thor on its inaugural flight over Hamburg last year said that the little plane “flies beautifully” and “is very stable.”

And with air traffic expected to double in the next 20 years, these lighter planes promise to save time, money and fuel-reducing carbon emissions and providing a greener future solution to air travel.

Back on land, the competition to be “the first” continues, with US architecture and design firm WATG Urban Architecture designing the world’s first freeform 3D printed house, in response to the Freeform Home Design Challenge – a global design competition sponsored by 3D printing technology provider, Branch Technology.

In an article by Cat DiStasio at Inhabitat she reports that while WATG’s winning design, Curve Appeal, is still only at the concept stage, Branch Technology plan to begin printing and constructing the design at their Chattanooga, Tennessee lab in 2017.

“The aptly named Curve Appeal is envisioned as a bubble-like structure with undulating slopes and space-age style,” DiStasio wrote.

“Within the home’s transparent walls, occupants can enjoy a light-filled open floor plan while being protected from the elements.

“Curve Appeal’s exterior skin is comprised of rolling archways intended to impart an organic feel and serve as a poetic connection between the home’s inhabitants and the rest of the outside world.”

In a statement from Branch Technology Founder, Platt Boyd, he said WATG’s design “pushed the envelope”.

“Curve Appeal is a very thoughtful approach to the design of our first house,” Boyd said.

“It responds well to the site conditions, magnifies the possibilities of cellular fabrication and pushes the envelope of what is possible while still utilizing more economical methods for conventional building systems integration.”

So when it comes to 3D printing, the sky is truly the limit.

Reported by Michelle Starr at CNET, the company unveiled the construction of their five-storey, 1,100 square metre apartment building and villa – now on show at the China-Singapore Suzhou Industrial Park – in early 2015, complete with internal and external “decorative elements”.

“The walls are printed hollow, with a zig-zagging pattern inside to provide reinforcement. This also leaves space for insulation,” Starr wrote.

“This process saves between 30 and 60 percent of construction waste, and can decrease production times by between 50 and 70 percent, and labour costs by between 50 and 80 percent. In all, the villa costs around US$161,000 to build.”

“In time, the company hopes to use its technology on much larger scale constructions, such as bridges and even skyscrapers.” 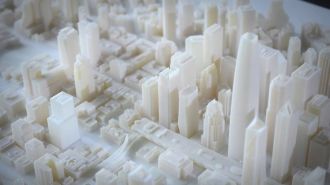