In her recent book The Wife Drought, Annabel Crabb shines an industrial-sized spotlight on the disparities between men and women in the workplace, with a particular focus on parenting.

Quoting research conducted by the National Centre for Social and Economic Modelling (NCSEM), Annabel reports that while the average 26-year-old male Australian can expect to earn $2 million over the course of his career (upped to $2.4 million if he has children), the average 26-year-old woman will only earn $1.9 million, reduced to $1.2 if she’s a mother.

So, when a man has children he is seen as more reliable, trustworthy, and a better employee, while a working mother is seen as less reliable and less worthy of promotion?

There are a number of factors that have led to this disparity, namely that men have historically been the ‘bread-winners’ while women have stayed home to look after the kids, but with a number of businesses now embracing flexible working hours and part-time contracts for both parents, not to mention paid paternity leave, the disparity is slowly shifting.

Hames Sharley has been in the businesses of architecture and urban design for almost 40 years now. These are creative industries that rely on diversity, clarity, good negotiation and team leadership skills, as well as a fair dose of inquisitiveness – all skills that are significantly honed during parenthood.

While the boys club still exists in many industries, workplace culture is paramount to the success of professional firms. Creativity feeds on flexibility, project management skills thrive when challenged and strength is gained through adversity.

Saralee Aufderheide, an architect at Hames Sharley has had a brilliant yet, admittedly, tumultuous career, but that certainly hasn’t kept her from climbing the corporate ladder.

In fact, she feels like her parenting skills have helped (rather than hindered) her ability to manage the demands of larger more complex projects, particularly when balancing big personalities on site.

“I think being a mother has really developed my project management skills, particularly when I’m out on sites – it’s all men out there and really blokey men too, so you have to be strong, smart and authentic,” she said.

“If something goes wrong the last thing you can do is lose your cool. You have to be solution driven, a team leader, a peacekeeper, a juggler – a parent.”

After giving birth to her son while still at university, Saralee found out she was pregnant with her daughter the week she started her first architecture job – so parenting and career have always gone hand-in-hand.

Now 45, with two teenage children, Saralee is an open, honest and strong professional woman with no regrets – every challenge and triumph that has come her way has moulded her into the confident architect she is today.

But it hasn’t always been easy. When she first returned to work part-time as a mother of two, Saralee quickly learnt that parenthood changed the way she was perceived professionally.

“It’s not a reflection on the firm I was with at the time, they were very good to me, but I really noticed when I returned to work that people’s perceptions of me changed,” she said.

“There was this overwhelming feeling that because I was a parent and worked part-time, that I wasn’t as committed as everyone else.

“But I didn’t go out for lunches with clients, or spend hours a week taking coffee breaks – when I was there I was 100% committed to the task at hand. I didn’t waste any time because I didn’t have time to waste.”

After working for a number of firms on both a part time and full-time basis, Saralee eventually qualified as a registered architect and started her own business in 2014.

Now with Hames Sharley, Saralee has really hit her stride, sustained by the firm’s strong culture of valuing people, knowledge, creativity and flexibility.

“I remember asking one of the directors about taking an hour out to visit the dentist and he just smiled at me and said: “You’re an adult, just go”. It sounds like a small thing but it’s the little things that make a big difference,” she said.

“Life has to fit in with work, and if you’re hiring professionals you just have to trust that they’ll get the job done, no matter what – once you give somebody that opportunity, they’ll rise to the occasion.”

Similarly, Sasha Radjenovich, Associate at Hames Sharley, admits taking time out to be a parent has enhanced his skills at work.

Joining the firm after graduating from university in 2006, Sasha eventually took on a role at Hames Sharley in Sydney before returning to Adelaide in 2014 to start a family.

“We decided to move back to Adelaide shortly after my wife fell pregnant – we wanted to be closer to family and friends,” he said.

“The Adelaide firm took me back in a full-time capacity, but after my son was born I realised the balance just wasn’t right.

“I was working on a couple of really high profile jobs, which involved a lot of travel and just wasn’t pulling my weight at home – I went back to three days a week a few months ago and it’s been a surprisingly smooth transition.”

Working three days a week, Sasha is currently engaged in two major projects for Hames Sharley in spite of his hours.

“The move from full-time to part-time hasn’t impacted my ability to work on high profile projects,” he said.

“I’m managing a national air traffic control project for the Department of Defence and am also involved in an urban master plan for Glenside.

“I just have a greater awareness of time now, and have learnt how to prioritise and delegate work to get the job done.”

Taking time out to think about projects on his days at home has also enhanced Sasha’s creativity and approach to his work.

“My days at home allow me to reorganise the things I’ve learnt over the first part of the week, so when I return to work I’m refreshed in mind and body, ready to take on the challenges that lie ahead,” he says.

“I also spend a lot of time with my son walking around the city, going to cultural precincts and taking in architecture. It’s a great way of tapping into your creative energy.”

And while Sasha values the flexibility he has, he recognises it’s not always been the case, and that many industries are still playing catch up.

“My mother in law’s employer didn’t allow her to continue in her role once she was married, that’s how far we’ve come in a very short period of time,” he said. “But there’s still a way to go.”

“It’s great to see so many Mums and Dads and people from different walks of life, with different life experiences in the office, particularly in a creative industry like ours – it all adds to the quality of the projects we work on making us an extremely dynamic firm.” 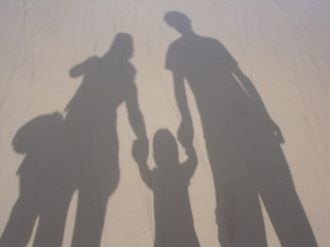