Looking to the past to inspire Fremantle’s future

In a recent art installation, Urbantopia, from artist Josie McGushin and the City of Fremantle, local primary school children were asked a simple question: “What would you like Freo to look like in 50 years?”

Challenging the students to create their answer out of used cardboard – crafting buildings, drawings and paintings – the result was an immersive installation, encouraging everyone from parents to passers-by to participate.

Cara Westerman, Associate Director at Hames Sharley, happened to be one of those passers-by and was thrilled by what she saw.

“I wandered past the installation when I was out getting coffee on the weekend and my immediate thought was, this is really exciting,” Cara said.

“It struck a chord with me because it was really calling on the next generation to think about planning, design and development.

“It did everything that an engagement piece should – bring everyone together to participate in a dialogue about what the next generation imagines our city to be, and at the end of the day, they will be the ones connected to our city in 50 years’ time.”

Having recently been named by Lonely Planet as one of the top 10 cities to visit in 2016, Fremantle is finally getting the recognition it deserves as a city that has used urban planning to bring together the old and the new with seamless authenticity.

Coming in at number seven on the list, Lonely Planet said that the port city was “a raffish harbour town with sea-salty soul to burn,” a city that, “thrums with live-music rooms, hipster bars, boutique hotels, left-field bookshops, craft-beer breweries, Indian Ocean seafood shacks, buskers, beaches and students on the run from the books.”

But it hasn’t always been a cultural mecca for students and hipsters.

The City of Fremantle was established in 1929 on the coat-tails of the gold and wheat boom of the late 1800s, which also financed the construction of Freo’s impressive late Victorian and early Edwardian buildings.

But when the boom ended, Perth became the economic centre of Western Australia, leaving Fremantle, and its beautiful buildings, to deteriorate over time.

Historically, any restoration of the city had been aligned with major port-related events, from the construction of an Allied submarine base in World War Two to its 1987 ‘make-over’ for America’s Cup Defence.

But with a view to the future, Fremantle introduced a number urban renewal projects in 2012, which have breathed new life into the old city.

“Traditionally Fremantle was a low socio-economic city, with a lot of port workers and a strong migrant population. This is reminiscent of other thriving world-recognised places like Greenwich Village in New York and SoHo in London,” Cara said.

Just like Fremantle, these places have developed through layers of culture and diversity, it’s what makes them unique and rich.

“Those cultural aspects, along with a really strong heritage is what makes Fremantle unique and attractive to new visitors and residents, but its real value is that it has still maintained its authenticity of place.”

Cara believes that renewal and rediscovery are now more than ever about place and how development contributes to the context, environment and its future evolution and possibility.

“Interestingly, many elements of Urbantopia were the established cultural icons of Fremantle, Kings Square and the church, as well as the topography, the beach, the water,” she said.

“These elements of the city are fixed for everyone, so over the next 50 years it will really be about how the city develops around them and how it will integrate new ideas with old.”

When thinking about Fremantle in 50 years’ time, Cara is hopeful that future planners will understand this balance between progressive development and maintaining a sense of place.

In terms of legacy and the decisions made today which will impact tomorrow’s generation, Cara also reflects on Fremantle’s commitment to sustainability.

The first council in Australia to outlaw the use of non-degradable plastic bags, in January 2013, Fremantle became a BioRegional One Planet Council in September 2014, displaying its commitment to implementing ten key sustainability principles by 2020.

“As a One Planet Council Fremantle’s policy decisions will now focus even more on the future sustainability of the city,” Cara said.

“We’ve been working with The City of Fremantle and Landcorp, on a project that applied the One Planet principles. This enables us to go beyond business as usual and plan for something aspirational and future purposed.

“It’s exciting because Fremantle is really thinking outside the box, and that’s where innovation is born.” 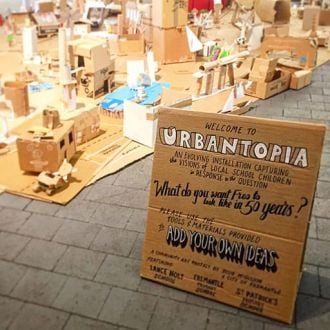