The Progression of Equality in the Workplace

“When women gain employment outside the home, earn an income and advance, they often re-invest in a better future for themselves, their family and community. Pay parity is critical. And when women and girls see relevant role models they aspire to, they become motivated and inspired to achieve their potential. Prime employers for women have progressive work cultures where diversity and inclusion are valued.” – International Women’s Day.

In the lead up to International Women’s Day, we sat down with Rebecca Spencer, Senior Planner at Hames Sharley to discuss equality in the workplace. Rebecca began at the organisation in 1995 as a part-time Research Assistant while completing her undergraduate degree. Over the past 25 years, she has continued to work for the company in various roles, ranging in full-time to part-time commitments. The ongoing and strong relationships which Rebecca maintained with Hames Sharley’s leaders, accompanied by the challenge and enjoyment of work, provided her freedom to step away and work overseas. After returning home, Rebecca began to raise a family and has since returned to a four-day workweek.

Rebecca is passionate about equality in the workplace and says this stems from her belief for a balance across both the home and work spheres, valuing both roles equally. “If we offer acknowledgement and support for women and men in their capacity and needs to advance their career as well as kick family or community-related goals outside the workplace, then people’s health and success levels will be at their best”,” she explains.

Many conversations have evolved for equality in the workplace, and changes are certainly beginning to happen, but like any ingrained social structures, things take time to evolve. Rebecca reflects, “What I hope is that by the efforts of us all to become conscious of our actions and change behaviours where necessary, the world of work will be a different environment when my daughter and son enter it.”

When it comes to role models, Rebecca has had her parents to look up to since a young age. Her father was the first person in his family to attend university and obtain a degree. Meanwhile, her mother became a nurse through on the job hospital training. Then, at the age of 41, Rebecca’s mother commenced her studies in midwifery: “So, in year 11 and 12 while I was hitting the books studying for exams, so was my Mum!” For Rebecca, her parents created meaningful goals and personal benchmarks and introduced her to the concept of equality in the workplace from her early years.

Rebecca explores the progression of equality since finishing high school in 1992; she explains that tradition choices still dominated both men and women in higher education. “About double the proportion (29%) of female higher education students were enrolled in courses such as arts, humanities and the social sciences, compared to 16% of male students,” she informs.

Approaching the International Women’s Day theme of #EachforEqual for 2020, Rebecca says that much has been gained over time in the education and work equity arenas, internationally, nationally, and in the Hames Sharley workplace. “When I commenced work in the mid-nineties, the ratio of women in professional versus administrative support roles was vastly different from now.” She explains that this is the result of both changing educational participation levels and societal expectations. “In 1992, 32% of architecture students were female, now, there is an equal gender balance for graduates.”

Over her years, Rebecca claims the mix in boardrooms has shifted to a place where now it’s as likely that a woman is presenting to the group or chairing the meeting as a man. This progression can be credited to an evolution in the industry, from women gaining experience in their field and most significantly, being supported in part-time roles during the time they may be raising a family.

On the theme of #EachforEqual, Rebecca says greater acceptance of dads, as well as mums working in a manner that is flexible to accommodate family responsibilities, is the key to a balanced, happy workforce where talent is maintained and nurtured, not lost. “My experience at Hames Sharley has been positive, although in the early years it was a workplace and industry comprised mostly of men,” she recalls. Rebecca says that Hames Sharley has been a place where a range of opinions are heard and respected, and a meritocracy exists. “Over time, I have received inspiration, opportunities and support, from colleagues and leaders of both genders.”

Although her personal experience has been positive, Rebecca feels that most industries (including architecture and planning) require progress for female senior and leadership roles. “Although, I believe targets for this goal shouldn’t be pursued to satisfy a façade of effecting change, rather making more effort to foster and encourage women with talent,” she reports. “It’s more important to choose the right person for the role than it is based on gender.”

Australian Government agency on Workplace and Gender Equality has noted that despite all the significant changes and positive experiences out there, the issue remains that the gender gap in the Australian workforce is still prevalent. Women continue to earn less than men, are less likely to advance their careers as far as men and accumulate less retirement or superannuation savings.

So how will we continue to create a culture and place where families can flourish? Rebecca believes the answers belong to prioritising and giving fathers the flexibility to work part-time while sharing the joys and responsibilities with their partners. “It is a shift that can set us all up for personal as well as professional satisfaction at being able to participate and reap the rewards and challenges of both spheres.”

This is a reality for Rebecca, as she shares the roles and responsibilities of raising a family with her husband. “I am grateful for, and acknowledge his role in valuing and prioritising my education and career as highly as his own,” she states.

Progression like this demonstrates how the right kind of leadership and experiences will teach our children that if they adopt the same respect for equality, they can help alter the course of past trends and generate a more balanced future. These small, individual but impactful shifts in social norms, together with supportive workplace policies and practices remind us that we can all do something to change the balance and create #EachforEqual in both our work and home lives. 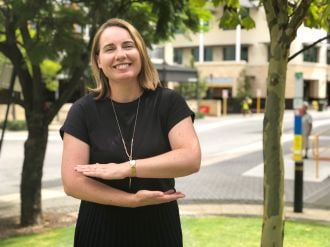