Why tackling the stigma of affordable housing makes economic sense

It’s not just the price of land, the cost of building and our tax regimes that are behind Australia’s housing affordability crisis.

Social stigma and misunderstanding also play a role in delaying and derailing projects, according to recent research by the Australian Housing and Urban Research Institute (AHURI).

While typically couched in terms of allowable planning objections, such as parking or shadowing, the opposition masks prejudice and fear, says Gethin Davidson, the lead author of the report, and planning lecturer at the University of New South Wales.

“A lot of the time, people use those excuses because if they say, ‘I don’t want to live next to poor people’ the planning authorities are not going to listen,” he says.

In 2013-14, CWP made a $40 million net profit on revenue of $214 million. White says: “Enabling homeownership is an important objective for us. But it also makes good economic sense. If you have a product you are tailoring to the lower end of the market, there is a mass of buyers.”

With recent data by Fitch Rating showing that Australian housing is nearing the world’s most expensive, there are a lot of opportunities for developers to include affordable housing in their portfolio if they understand and address community objections.
The AHURI researchers found that most people expect residents of affordable housing to behave badly. Davidson says: “In terms of their real fears, they worry about whether they will look after their homes, that they might be criminals, or have wild parties or park old bomb cars on their lawns.”

It’s an inaccurate portrayal, Davison says. “The vast majority of people in affordable housing – thousands and thousands – are just regular people. But there are always some, and stories about public housing in the media are invariably negative.”

Residents also worried about property values falling when their neighbours occupy affordable housing, but the AHURI research showed this did not happen.

The differences between public, social and affordable housing are poorly understood by communities (in part because definitions among policymakers vary widely), further contributing to the fears sparked by stigma and stereotypes.

Innovations, solutions and proposals from the private sector

In the main, Cedar Woods develops on the urban fringe where land costs less.

After 20 years as a listed property developer, Cedar Woods has used a variety of innovations to create affordable housing prices.

These include:
Cedar Woods “twin-key” housing is a design solution to the affordable housing issue. Buyers of the popular detached four bedrooms, two bathroom houses are enabled, through both clever design and changing the planning frameworks, to their home and rent half.

“If you are a couple looking for the big four by two for say $380,000 we have some designs whereby the house can function as two occupancies. You put in internal insulation. The fire rating is already there, and the entry and parking arranged so you never cross paths.”

The planning authorities like this idea, as does the market. For example, couples can use the additional rent to pay off the mortgage and then reclaim the other side of the house when they have kids. Likewise, the design allows for downsizing later in life, extending the life of home occupancy.
Bill Hames, Cedar Woods chairman, sees a way to solve housing affordability using a financial instrument.

Could a new financial instrument be the solution?

The land will always be cheaper on the urban fringes, Hames says, but there is a hidden cost. This cost is the one-off government levies for sewerage and other infrastructure that developers pay upfront and pass on to home buyers.

If banks provided a financial product – such as an “infrastructure bond”—that allowed home buyers to pay off this levee over time, Hames says developers could pass on the lower cost of land to buyers.

Critics might say that such a proposal only encourages unsustainable urban sprawl, but Hames says creating greater density in the inner suburbs will not solve the affordability problem. He says: “There is no way we will ever be able to build high-density housing for the same price as you build on the fringe because you are building more complex buildings, with a lot more safety issues and costs,” Hames says.

The problem of sprawl could be slowed over time by building more densely at the urban fringe. This would slow down demand for new land, and create more vibrant, economically–sustainable and less car-dependent communities at our cities edge.

Hames says: “What we need is more housing choice both on the fringe and in the inner city infill development.”
Objections cause planning delays and add to the financing costs of developments, and amendments cost money too.

Changing attitudes to keeps prices down

Developers have a significant role to play in changing attitudes and educating the community about housing diversity.

Davidson says: “Some people really like living in a diverse area, and there are others who don’t. People don’t think about where their bus driver or garbage man lives, and whether they have to travel for an hour and a half to get to work.”

Research consistently shows that housing diversity improves local economies. “There is definitely an economic argument,” Davidson says, “but there is also a social argument that is good for us to encounter different types of people in our community.”
Community anxiety about co-locating with affordable, social and public housing, including boarding houses, is groundless, the AHURI research showed.

Storm in a teacup

“We looked at where affordable housing had been built, people in those areas said it had no effect on them, or impact on property values,” Davidson says.

“There’s a lot of fuss about it, but it doesn’t play out in real life.” 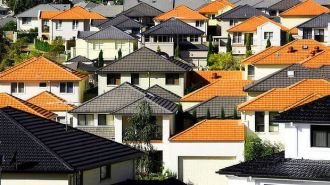