There’s nothing like a three-storey puppet wandering down a street to bring a community together!

Recently Perth was incredibly lucky to experience – free of charge – a once-in-a-lifetime performance event as part of the 2015 Perth International Arts Festival.

The Incredible and Phenomenal Journey of The Giants to the Streets of Perth – involved two puppets: one, a six-metre little girl and the other an 11-metre deep-sea-diver.

I was among the thousands of adults and children who watched and listened in awe as these remarkable creations of the French arts company, Royal de Luxe, traversed our streets telling a story that wove threads of indigenous mythology with the ANZAC story.

All up, 1.4 million Perth people came to the performance, which lasted three days. It was a remarkably moving experience.

This kind of event brings communities together and allows us to use our public spaces and streets to their full potential.

The event brought to life a number of lessons that can be applied to our city and many other cities by policymakers, planners and designers.

The cost of this event was $5.4 million, of which the State government contributed $2 million, with the balance sourced from private companies’ philanthropic donations. Although this is an astonishing amount of money, I believe it is justified because of free, once-in-a-lifetime cultural events:-
Culture and the arts are central factors in attracting creative and knowledge-workers; and a key to establishing places that highly on liveability scales.

1. Showcases culture and arts events as significant opportunities for city development and community-building.

Events like this make Perth International Arts Festival accessible for all and encourage greater participation in the ticketed events. Building an audience for arts events also attracts the creative classes and knowledge workers to establish in our city.

There are a lot of festivals in Perth, and they often have free elements, but this is the biggest both in scale and significance of its type and kind. It was a real equaliser and testament to the foresight of our government and business leaders that they could see its benefits for Perth and its people.

It complemented what else was happening in the city, and people coming to the Giants also became exposed to or attended other art events such as the Fringe World Festival.

A recent analysis by the Committee for Perth (with Hames Sharley) into participation rates in the performing arts show that Western Australia is eclipsing other states.

The report shows there’s a growing need for performing arts venues to accommodate the rising appetite for events and also to keep pace with expected population growth. There is also scope to create temporary venues for such performances and festivals that occur each year, such as PIAF and Fringe World.

We cannot replace investment in high-quality, well-positioned venues cannot with temporary performance places, but both serve important roles in allowing the community to participate in a variety of arts events.
The Giants received a lot of local, national and international press coverage before and during the performance, and social media was buzzing with opinions and images from the experience.

2. Provides an opportunity to position the city in a global arena - marketing it to the world, assisted by social media

The puppets traversed Perth’s most appealing streets and parks, showcasing the city as a desirable destination for both travel and living.

Social media helped spread these messages and the excitement around the world, and also influenced the degree of participation in the event.

One of my colleagues, for example, had decided it was too hard to travel into the city on public transport and fight through crowds with a baby and a toddler in tow.

Then he saw two solid days of social media posts from his friends, including those with young kids, and that made him change his mind and decide it was an event not to be missed. He and his family had a fantastic time.
The Giants engaged the entire Perth community and generated excitement and a sense of community pride in the city whilst educating and bringing history to life.

3. Provide a foundation for interactivity and education about the city, its heritage and culture

The story the puppets performed drew beautifully on two important themes in our community – some from the indigenous Noongar Nation, and others from the ANZAC tradition. In particular, the story drew on the prior work done by the City of Albany and its residents, which is the port from which the ANZAC troops departed.

In October last year, Albany opened a National Anzac Centre to commemorate that city’s role in the birth of our national ANZAC legend.

The Giants story supported and promoted that initiative and created greater understanding and awareness among the residents of Perth and Albany and the Noongar Nation.

The city parks and streets became a history classroom for a day. Many schools took their students to the event as a unique excursion, which started on a Friday.

While the puppets were playing out their performance, people walked alongside them. They performed for a few hours each morning and then rested for the hot afternoons (together with the exhausted red-coated puppeteers!) before continuing again in the afternoon and evening.

When the deep-sea diver “slept” in front of Perth’s horseshoe bridge and main train station, audiences heard his realistic breathing via a speaker close by.

When the little girl giant stopped at some street corners there was a call for children to volunteer to climb a ladder and swing on her arms – what a lucky few to experience that!

It’s hard to quantify such experiences, but that doesn’t mean they are not valuable in building our community and providing a new perspective on our city and how places can be more than functional rather varied and flexible to cater for such possible events.
A lot of people who live on the fringes of Perth may not come into the city very often. The Giants performance drew them in by using the inner city as its stage. I believe for some, the changes they saw in the city and the many things to do outside a big festival event combined with how easy it was to come in on the train will make them much more likely to visit and enjoy the city regularly in future.

4. Demonstrates how streets can be places of activity as well as movement and unveils a different perspective on the city

For urban designers and town planners, this performance reminds us of all the different ways we can use our city infrastructure. It reinforces the importance of planning for and designing this capacity into our urban plans. Although many places don’t usually have to cater for large volumes of people walking in the streets, they can still be designed and imagined in a way that makes this possible. For instance streets, parks and public spaces should be able to cope with nightlife or weekend usage that is different and caters for larger crowds than usual weekday work-related requirements. To me, the Giants event highlighted the need for designs that support and nurture our communities using the streets making them flexible and comfortable not just for cars, but as a place people can walk in, use and feel safe in.
Restaurants, shops and hotels reported big spikes in sales and patronage over the weekend. People who travelled in from the fringes of the city generally stayed for the whole day resulting in increased spending at outlets.

5. Stimulates economic activity, with a spike in retail, food and accommodation revenues

In addition, the Perth business community and two tiers of government all pulled together to organise and fund this colossal event, and that was amazing in itself.
There was a lot of moaning and groaning from people saying, how do I get there? It’s too hard! But, for the people who did manage it, using the busy but efficient train system, the experience opened their eyes to what coming to the city can be – invigorating, fun and magical.

6. Create opportunities for behaviour change, in areas such as transport use, tolerance and expectations

It’s easy to get used to jumping into our cars for most trips in Perth, but for this event, you more or less had to use public transport. For many, that was a new experience but overall I think a good one. The trains were promoted strongly as the way to go because the authorities didn’t want to have a traffic crash. Buses still ran but some were restricted because city roads were shut in a rolling procession to allow the puppets to move around the streets.

Mass public transport use for this event shows how efficient and effective our system is, especially for managing large crowds safely.

Generally, Western Australians don’t really like being in a crowd or at least are unaccustomed to it - but this crowd felt exciting, safe and uplifting. The city was transformed by this and positive collective experience, rubbing shoulders with the rest of the community and spending the whole day out in the city.
Perth residents walked tall with the Giants for those few days and felt a new pride in our city. The event demonstrated that there are many new opportunities for our city and benefits that can be reaped from the large public and private investment and that lasting effects in the form of: behaviour relative to public transport; retail and hospitality spending stimulus boosting businesses; use of our streets for activities as well as functional movement networks; promotion of participation in the arts and Perth in the global arena; excellent results from the cooperation and connectedness between governments, business and the community; and engagement of people of all ages in learning interactively about our history. For these reasons the risk taken to woo the Giants to Perth is considered to be well worth it.

Perth residents walked tall with the Giants for those few days and felt a new pride in our city. The event demonstrated that there are many new opportunities for our city and benefits that can be reaped from the large public and private investment and that lasting effects in the form of: behaviour relative to public transport; retail and hospitality spending stimulus boosting businesses; use of our streets for activities as well as functional movement networks; promotion of participation in the arts and Perth in the global arena; excellent results from the cooperation and connectedness between governments, business and the community; and engagement of people of all ages in learning interactively about our history. For these reasons the risk taken to woo the Giants to Perth is considered to be well worth it. 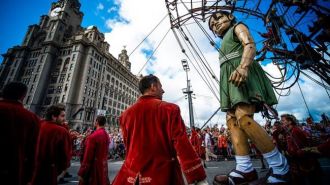