The walls are coming down

The rise of co-working is fostering links between entrepreneurs and the corporate world and empowering a growing army of contractors serving both markets.

Lauren Anderson has witnessed the phenomenal growth of shared working spaces firsthand. She and her husband set up the Homework co-working space in Sydney’s Darlinghurst three years ago, and have just launched another much larger space in nearby Surry Hills.

While Homework was aimed at individual entrepreneurs and very small teams, the new space – The Common Room – caters to growing businesses with bigger teams. Demand for flexible workspaces is getting stronger says Anderson, who the chief knowledge officer of collaborative consumption consultancy Collaborative Lab, says

“I think entrepreneurial culture has increased dramatically,” she says. “There are heaps of people running side projects or leaving fixed employment in aid of starting up a new venture. There are five to ten co-working spaces in most capital cities to choose from now, which is pretty amazing because there were about four spaces in the whole country a few years ago.”

These are more than just places that offer a cheap place to work for artists and early-stage businesses. They are home to a growing army of freelancers, contractors and consultants who have abandoned fixed employment without plans to return.

And they are increasingly being used by the corporate world, too.

The big end of town

Co-working is now a fast-growing component of business centres around the world. Co-working space provider WeWork is soon to be the anchor tenant of a $300 million redevelopment co-owned by American property giant Boston Properties in New York’s Brooklyn Navy Yard. According to Forbes, WeWork expects to triple its membership to 46,000 over the next year and expand to 60 locations from around 21 today.

At the upcoming Smart Work Week from December 1-5, PwC Australia staff will work alongside those of Cisco and other companies, as part of a 100-person experiment in various remote work sites around Sydney.

Brad Krauskopf, CEO of Third Spaces Group and founder of Hub Australia, CoActive8 and Platform3, says Hub Melbourne and Hub Sydney have doubled in size this year and plans are in place to add another location in each city next financial year.

“It’s important to understand co-working spaces aren’t driving this, it’s changed in the way people work that are driving this,” Krauskopf says. “As more people are moving to the freelance economy, and as larger companies look for more ways they can boost their level of innovation and connect with small business, you are seeing co-working spaces becoming a great point of intersection between industry sectors and communities.”

Last year, Australian property giant GPT Group led a $6 million investment round in Silicon Valley startup Liquidspace, which offers an online marketplace for professionals to book workspaces and meeting rooms. GPT now assesses the opportunity for shared workspaces as part of all its new developments.

“We felt that the idea of providing flexible, shared workspaces at our properties would not only enhance their value to our existing customers but potentially also attract a new type of customer to our portfolio,” says Sam Nickless, GPT’s head of property innovations.

At Space&Co, a co-working facility at GPT’s Melbourne Central Tower, a local community of members work alongside building tenants.

Nickless says demand is coming from entrepreneurs, freelancers, and increasingly corporates, who are dealing with an increasingly flexible workforce and want on-demand facilities for meetings and project teams that don’t require permanent space.
Co-working spaces are more than just chairs and desks in a room. A lot goes into making these facilities sing.
At the Fishburners co-working space in Sydney’s Ultimo, members have the power to veto the entry of potentially competing businesses, out of privacy concerns.

“There are no direct competitors in here that don’t approve of the others being in here,” says Murray Hurps, Fishburners general manager. “It frees people up to speak more openly.”

Tony Armstrong, associate director of Global Corporate Services with real estate group CBRE, says some of the earlier co-working spaces were provided as “freebies” to attract tenants in a tepid market. But now tenants are increasingly asking landlords to give up entire floors to co-working.

“We’re still working out what the financial model will look like,” Armstrong says. “Companies do more and more project work, projects come up out of nowhere and they don’t have space to put them in. If they have a shared space in the building they put them there.”

Armstrong says that without services that bring people together, they are full of “people who don’t talk to each other much”.

A report he co-authored, titled Fast Forward 2030: The Future of Work and the Workplace launched jointly by CBRE and developer Genesis, says members of the real estate industry need to shift from being just space providers to “curators of experience and builders of the community”.

Shared spaces need a variety of zones for different purposes – such as quiet zones for focused work, cafes and other places for impromptu meetings, as well as open plan areas. They need high-spec wireless internet and video conferencing facilities.

And they need activities that foster collaboration. Depending on what kind of community it is, these can include morning teas, yoga sessions, entrepreneur presentations and other activities that bring people together.

“The ones most successful are those that organise activities to facilitate collaboration,” Armstrong says. 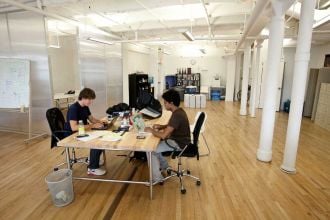 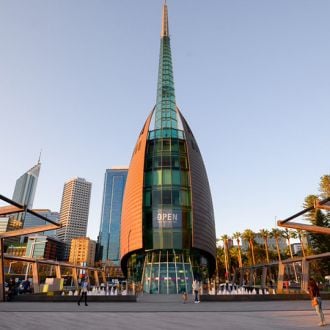 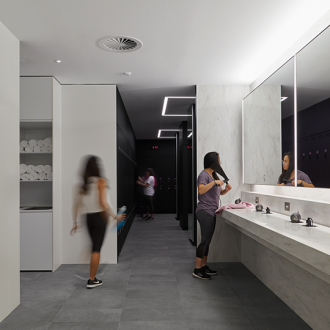