The Government of South Australia is proposing a once-in-a-generation overhaul of its planning and development legislation and will introduce new rules to State Parliament this month.

The key to the Deputy Premier John Rau’s new proposals is to reduce the complexity of residential planning. The government hopes to foster new projects, such as medium and high-density housing, and smooth the process of re-developing existing sites for new purposes.

Developers, who are looking at the strongest return on investment, are keen for governments to allow taller buildings with more apartments. That keeps costs and prices down, and profits up.

But there is a still a strong preference for detached housing in Australian cities. And apartment buyers prefer small apartment blocks; medium density at most.

Adelaide needs to grow up

Now the state is facing an ageing population, he says, and a ‘brain drain’, as its most educated residents head to the eastern states for better jobs and pay.

Deputy Premier Rau describes the proposed reforms as the biggest in 25 years. Adelaide’s planning and construction are not meeting community needs, he says. “We need to encourage better infill and focus on growing Adelaide up rather than out”, Rau said. “Rezoning some areas allowing for greater density can actually help to better preserve our character areas”.

The push to medium and high-density housing has been difficult and controversial. Gannon believes two factors will bring the state’s growth rates back up, and improve lifestyle and employment, over the next five years.

The first is setting and enforcing the metropolitan growth limit; no more extending the city’s boundaries. The second is a move to high density, vertical living similar to Melbourne, Sydney and Brisbane.

There is plenty of land if the government allows developers to replace low-density housing with medium and high-density housing (infill) and rezones commercial land and buildings.

Gannon is an advocate of adapting and reusing land. In Adelaide’s CBD, office occupancy is low; some land could easily be converted to residences.

The issue is not about density but housing diversity, says managing director of Hames Sharley, Caillin Howard. “Adelaide needs to offer resident choice in the type, quality, size, amenity and price of homes”.

It’s a mistake to make the debate about profit and the price of housing, Howard says. It is one of choice and opportunity.

When there is an uplift economically in housing, developers get their share of the margins, and so do home buyers, Howard says. “The movable part of the equation is the size of the land and the size of the product”.

Bowden as a demonstration project

The $1 billion Bowden development is a project of the state government’s planning department, Renewal SA. With a mandate to reinvigorate Adelaide’s urban areas, Bowden is Renewal SA’s first medium density infill project. It is located across 16 hectares of a former industrial site.

The government wants residents to get used to living closer together and hopes Bowden will calm their fears and shift their preferences.

Bowden’s project director for Renewal SA, Alicia Davidge, says: “Bowden is a flagship for the government in terms of how medium to high-density housing projects can work with the environment”.

Once completed it will house 3,500 residents across 2,400 dwellings and is expected to create 2,200 jobs over 14 years, during both the construction phase and the retail, commercial and community activity its residents bring.

The Bowden development is designed to appeal to owner-occupiers. It’s a chance for locals to buy a $500,000 home within 15 minutes from the city.

But not all have sold to locals, Davidge says. “Adelaide can’t absorb that many locally. We have seen a number of buyers from Sydney and Melbourne”.

The government is working closely with developers. Davidge says: “As this is a demonstration project for the government, we naturally want to make it work well. We look at product mix and the market feedback about how best the building should be designed. We integrate it in with the local community, and the demographic as well”, Davidge says.

Adelaide’s residential and commercial mix is markedly different to the high-density cities of Melbourne and Sydney – but it’s moving that way.

“The next ten years will see a focus on high-density living, planning and excellent design, ensuring that high density is built with the fundamentals that breathe new life into deactivated spaces”, Davidge forecasts. “The project is core to the state government’s agenda for urban renewal. It is about preventing urban sprawl and reducing the expensive cost to the government to service those areas”.

“The challenge at Bowden is from the mindset and cultural aspect from low-rise to high-rise, and addressing buyers’ fears of off-the-plan purchasing”, Davidge said.

By freeing up the government’s planning constraints, she hopes to encourage housing developments that are affordable for buyers on an average $75,000 annual salary. 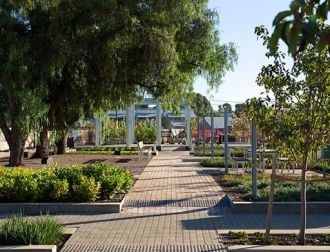