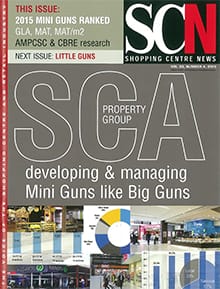 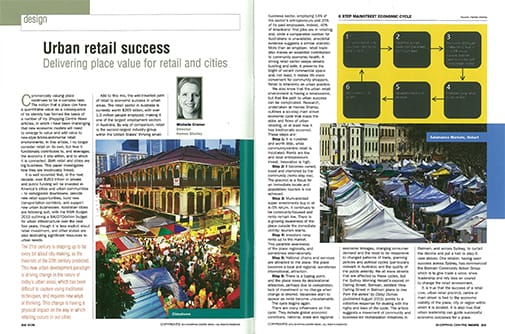 Commercially valuing place continues to be a complex task. The notion that a place can have a quantifiable value as a consequence of its identity has formed the basis of a number of my Shopping Centre News articles, in which I have been challenging that new economic models will need to emerge to value and add value to new-style bricks-and-mortar retail environments. In this article, I no longer consider retail on its own, but how it functionally contributes to, and leverages, the economy it sits within, and to which it is connected. Both retail and cities are big business. This paper investigates how they are inextricably linked.

It is well recorded that, in the next decade, over $US3 trillion in private and public funding will be invested in America’s cities and urban communities – to reinvigorate downtowns, provide new retail opportunities, build new transportation corridors, and support new urban businesses. Australian cities are following suit, with the NSW Budget 2015 outlining a $AUD70-billion budget for urban infrastructure over the next four years, though it is less explicit about retail investment, and other states are also dedicating significant resources to urban needs.

The 21st century is shaping up to be every bit about city-making, as the theorists of the 20th century predicted. This new urban development paradigm is driving change in the nature of today’s urban areas, which has been difficult to capture using traditional techniques, and requires new ways of thinking. This change is having a physical impact on the way in which retailing occurs in our cities.

Add to this mix, the well-travelled path of retail to economic success in urban areas. The retail sector in Australia is currently worth $265 billion, with over 1.2 million people employed, making it one of the largest employment sectors in Australia. By way of comparison, retail is the second-largest industry group within the United States’ thriving small-business sector, employing 14% of the sector’s entrepreneurs and 25% of its paid employees. Indeed, 40% of Americans’ first jobs are in retailing and, while a comparative number for Australians is unavailable, anecdotal evidence suggests a similar statistic. More than an employer, retail trade also makes an essential contribution to community economic health. A strong retail sector keeps streets bustling and safe, it prevents the blight of vacant commercial space and, not least, it makes life more convenient for community shoppers. Retail is inherently an urban practice.

We also know that the urban retail environment is having a renaissance, but that the path to urban success can be complicated. Research, undertaken at Hames Sharley, outlines a six-step main street economic cycle that maps the ebbs and flows of urban retailing, or at least how it has traditionally occurred.

Step 1: It is rundown and worth little, while community-centric retail is incubated. Rents are low and local entrepreneurs invest. Innovation is high.

Step 2: It becomes owned, loved and cherished by the community (rents stay low). The precinct is a focus for an immediate locale and population; tourism is not achieved.

Step 3: Mum-and-dad super investments buy in at 4–5% return. It continues to be community-focused and rents remain low. There is a growing awareness of the place outside the immediate vicinity; tourism starts.

Step 4: Investors ramp rents up to the market. This parallels awareness of the place regionally, and sometimes internationally.

Step 5: National chains and services are attracted to the place. The place becomes a local and regional, sometimes international, attraction.

Step 6: There is a tipping point, and the place loses its destinational attraction, perhaps due to competition, lack of investment or no change when change is desired. Vacancies start to appear as rents become unsustainable.

There are many influencers on this cycle. They include global economic conditions, national, state and regional economic linkages, changing consumer demand and the need to be responsive to changed patterns of trade, planning policies and political cycles (particularly relevant in Australia) and the quality of the public amenity. We all know streets that are affected by these cycles, but the Sydney Morning Herald’s exposé on Darling Street, Balmain, entitled ‘How Darling Street in Balmain plans to rise from the ashes’ by Daisy Dumas (published August 2015) points to a collective response for dealing with the highs and lows of the cycle. The article suggests a movement of community and business-led revitalisation initiatives in Balmain, and across Sydney, to curtail the decline and put a halt to step 6 (see above). One retailer, having seen success across Sydney, has commenced the Balmain Community Action Group which is to give trade a voice, show leadership and rely less on council to change the retail environment.

It is true that the success of a retail core, urban retail precinct, centre or main street is tied to the economic viability of the place, city or region within which it is located. It is also true that urban leadership can guide successful economic outcomes for a place.

I recently took part in a workshop with the United States’ think-tank, the Brookings Institution. The focus of the workshop was the Global Cities Initiative, a five-year project of Brookings and JPMorgan Chase aimed at helping the leaders of metropolitan America strengthen their regional economies by becoming more competitive in the global marketplace. The process works at all metropolitan scales, from the mega-city to the business district and, as such, a number of the key findings are outlined here to assist urban retail places maintain a competitive advantage, and contribute to the broader economy – in other words, to assist retail precincts strengthen their urban economies by becoming more competitive in the regional marketplace. And, as it turns out, it all comes back to place.

The following six performance indicators have been adapted from The Brookings Institution’s research and applied to urban retailing, in order to further strengthen the argument for the value of place.

Define what it is about the urban retail environment that is different to other locations, and build from those assets. For example, Salamanca Place in Hobart and The Rocks in Sydney have both built a place and trade reputation from their unique historic locations.

Collectively (as well as individually) sell something that others don’t, and ensure it has a connection to its place of origin. One of the reasons Chinatown, in so many cities, has been successful is that the agglomeration of one focused activity has built a foundation for trade, that now provides a platform for exchange of many related goods and services, education and training, as well as housing and lifestyle.

Skill the people who are involved in showcasing the retail, and the place about the retail, and the place. The performance of this is twofold. Not only does it assist in the articulation and purpose of products, assets and urban differentiation to those seeking to purchase, it also makes the location an attractor of the best talent, who respond positively to the respect the investment in them affords.

It is no longer about the success or failure of individual traders. Success will be a collective response to retailers, landlords, place managers, financiers, service providers, governments and others involved in the operations of the place as a whole.

The Brookings Institution focuses on infrastructure, government policy, people and talent, innovation, trade as quantifiable measures of value creation in a city and, by extension, a place. However, the outcome of my working with Brookings at the Global Cities Initiative Workshop was the inclusion of the design of place as a quantifiable performance in the creation of value. Design has now been included as a true place measure and performance indicator for achieving economically viable urban retail places.

It is an exciting time for retail in our cities. Building on previous articles and research, this paper continues to advocate for change in the way we deliver our retail precincts. Traditional tools and approaches will not facilitate the outcomes that a 21st-century city or retail industry needs. New contextual understanding and economic models are needed. Moreover, local and state governments must also be part of the conversation and assist in guiding urban retail outcomes. In this way, all parties can understand and contribute to how urban retail precincts can be marketed, the development process fostered and the full market potential, for both retail and cities alike, achieved.

The Brookings Institution is the source of the US data outlined in this paper.

The resurrection of the ELP Is the food court, as we know it, dead?
Latest News
20 January 2022