For the women of the 19th century, the birth of the department store was a true game-changer. Prior to the invention of these retail destinations from the 1850s through to the 1900s, women were homemakers who rarely left the house unless accompanied by a male. Indeed, for women, walking the streets was considered distasteful, an act capable of ruining one’s reputation. Many shops, restaurants, and public spaces were off limits to women who arrived solo.

With the advent of the department store, however, middle- to upper-class women had the opportunity to leave the house unchaperoned, free to shop as they pleased. Savvy retailers such as Harry Gordon Selfridge and Rowland Hussey Macy caught onto this transition, making sure women felt comfortable by furnishing their stores with carpets, lounge chairs and comfortable private dressing rooms – like homes, in fact.

According to data from research firms Yankelovich Monitor and Greenfield Online, up to 85 percent of all consumer purchasing decisions are made by women, demonstrating the immense power bestowed by department stores on the generations of women that followed. In a time where women weren’t permitted to vote, it could even be said that the 19th-century shopping centre played its role in the progression of female emancipation.

The History Channel reports further on this phenomenon, and you can read the full story here. 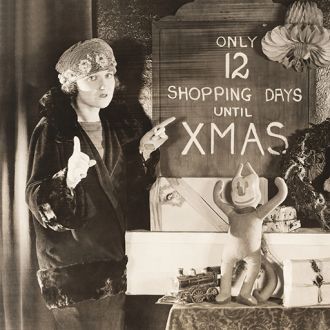