The report highlighted some of the reasons the tropics should be reconsidered as one of the most important regions of the world.

1. It’s where most of the people will be…

Not only is the population growing rapidly. It is becoming increasingly affluent as more people rise out of poverty. This is a wonderful change, but it will put unprecedented pressure on natural resources. The challenge of sustainable development in the tropics is one of the most important global issues of our time.

2. It’s where most of the children are…

Just over half of the world’s children under 15 currently live in a tropical region – by 2050, two out of every three will be living in the tropics.

A young, educated, working population has the potential to provide the demographic dividend needed to lift tropical nations out of poverty. We need to ensure that these young people can grow up in a place where they can participate and contribute meaningfully and build productive and satisfying lives for themselves and their families.

3. The greatest diversity of plants and animals

The tropics are the most diverse region on Earth, hosting about 80% of the planet’s terrestrial species and more than 95% of its corals and mangroves.

Our human communities derive all food and many medicines and industrial products from wild and domesticated components of biological diversity.

4. The greatest diversity of cultures as well

The cultures of the tropics are diverse and rich. In fact, most of the world’s languages are spoken in a broad area on either side of the equator. There are more than 2000 languages spoken throughout Africa, compared with just over 200 in Europe.

The diversity of culture is an asset for the tropics. The secrets to sustainable development in the tropics may well be found in the culture and languages of the people who reside there, rather than policies and solutions imposed from the outside.

Over the past 30 years, economic growth in the tropics has outperformed the rest of the world by almost 20%. By the end of this century, tropical nations such as India, Indonesia and Nigeria will be among the largest economies in the world, the report has found. India’s economy may well outgrow China’s. The Asia-Pacific region already has a larger middle class than Europe and North America combined.

Understanding the nature of this growth, the demographics of tropical populations and the needs and aspirations of tropical people; particularly in relation to the demand for goods and services, will be fundamental for sustainable development.

Growth in the value of trade in the tropics is more than twice that of rest of the world. Before 2010, the largest cargo hub in the world was Memphis International Airport in the US. Since then, however, the tropical Chek Lap Kok Airport in Hong Kong moves the largest amount of freight. In 2014 this equated to more than 4.4 million tonnes.

7. The tropics drive the global climate

The tropics are the dominant player in the global climate system. The El Niño-Southern Oscillation (ENSO) phenomenon is the largest single source of global climate variability. Importantly, ENSO events are predictable. This has enormous societal benefit as forecasts allow climate- vulnerable regions time to prepare for adverse environmental conditions.

8. Climate change will have huge impacts in the tropics

Tropical biodiversity is much more susceptible to environmental impacts, including climate change. Species in the tropics are inherently more vulnerable to changes in their environment because they tend to occupy small geographic ranges, are naturally rarer and are specialised to deal with a narrow range of environmental conditions. Rising temperatures and changing rainfall regimes will have huge impacts on a region that has remained climatically stable for the past three million years.

Over the past decade, the mobile phone has emerged as one of the fastest-growing consumer technologies ever introduced. Mobile telephony is the basic means of communications for many people in tropical countries. It requires less investment in terms of infrastructure and it’s, therefore, outpacing the growth of fixed -line telephones.

Mobile phone and internet access are allowing people of the tropics to interact with each other and the rest of the world in a whole new way. The next few years will see, alongside the growing availability and affordability of smartphones, the people of the tropics becoming part of the global conversation and driving policy change, rather than simply being the recipients of it.

10. The Top End of Australia

The demography of Northern Australia is quite different than the rest of the country and its population growth rate is higher. Notably, much of northern Australia’s population is young and Indigenous. The north is also more influenced by temporary migration, with a population of people moving to the region that has specific needs and aspirations.

The future of tropical northern Australia will depend largely on linkages it develops with other nations in the tropics. Under most future scenarios, nations with young populations such as Indonesia and the Philippines are set to become major economies in the region over the next century.

The Darwin/Top End climate is hot, humid and muggy with an average daily temperature of 32-35 degrees Celsius. The day/night temperature variation is also minimal.

By geographical location, the region falls under the influence of the north-western monsoon but is also on the edge of Australia’s arid region. The region is characterised by a 4-5-month wet season and a 7-8 month dry period with minimal rainfall. Cyclones can accompany the wet monsoon season.
The tropical environment is unforgiving if man-made interventions are unprepared. A hostile combination of cyclonic winds, heavy seasonal rainfall, long dry periods and high humidity quickly attack the fabric of buildings not correctly designed. Paradoxically, the desire of people living in the tropics to engage with the outdoors and enjoy abundant natural light and ventilation can be at odds with the need to provide carefully-considered protection against winds, moisture and insects. A hermetically sealed box may deal with the environment most effectively, but this is not what people want.
In Darwin, there are three important recently-completed buildings that share a focus on improving health outcomes and opportunities for the Indigenous population, and are specifically designed for the tropics: the Michael Long Learning and Leadership Centre, the Menzies School of Health Research, and the Flinders University NT Medical Program building at Royal Darwin Hospital.

How can architecture respond to the people and environment of the tropics?

The open, light and colourful Menzies building has deep roof eaves that provide welcome shade around the building and are lined with colourful ‘Tiwi’ battens that create patterns of dappled light across the façades. The use of light and shade, combined with natural materials and building scale, are specifically designed to reassure visitors and create a sense of welcome. Keeping the building to two storeys was a key factor in scaling the building appropriately and fostering interactions within.

The analogy of a tree with spreading shade was used in discussions with stakeholders to develop an appropriate design language and resulted in the expression of deep coloured eaves that filter light and represent a symbolic tree canopy.Galamarrma – The Tree of Knowledge in the centre of Darwin – is an ancient Banyan tree that is culturally significant to the Larrakia Aboriginal people as a meeting place and community noticeboard. It was a place where youths met with and learned from their elders, and where wisdom was gained in its shade. The tree is a universally-understood symbol evoking powerful associations of shelter, nourishment, knowledge and life.

The interiors have been designed with colours, patterns and themes inspired by the regions and culture of the people that Menzies as an organisation liaises with on a daily basis.
The design incorporates an innovative approach to thermal comfort and tropical design with high ceilings and low-turbulence ceiling fans throughout allowing excellent occupant comfort to be achieved at higher air temperatures. Promoting gentle air movement, the fans provide high air flow for cooling with low turbulence and minimal wind noise.

These new buildings represent a new direction in designing for the tropics, and the start of a welcome and long-overdue dialogue about the best way forward for architects in the most dynamic and important emerging region in the world. 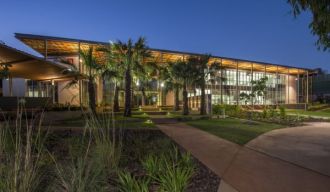