Fear of missing out (FOMO) is the new keeping up with the Joneses. Here, some of Hames Sharley’s thought leaders discuss whether minimalism is making us richer, and the impact this is having on the built environment.

What do millennials want?

Advertising is often telling us we’d be happier if we bought a new car, a new house or the latest fashion. But the fact of the matter is, millennials don’t care. They’d rather dine out with friends, backpack around Southeast Asia or see bands at a music festival. Why? The satisfaction lasts longer.

There once was the assumption that most people preferred to spend their money on something tangible because this would last longer. That assumption no longer holds true.

Research has shown that we adapt. Most things that once brought us joy will lose their lustre once they become a part of our daily lives, a phenomenon known as the Hedonic Treadmill. This is the paradox of buying something tangible (‘Stuff’): it won’t stay new forever, and therefore the happiness it brings is short-lived, despite the object itself lasting longer. Psychological research suggests that material objects account for no more than ten per cent of our happiness, and as such the collection of Stuff is an unsatisfying way to seek contentment.*

What do other generations want?

This phenomenon isn’t just experienced by millennials, however. Our experiences define who we are as people and therefore hold an important place in our psyche. Often, our daily experiences are guided by our internal motivations and passions. Shared experiences also contribute to greater human connection, more so than shared consumption does – they’re part of what helps us relate to one another. We’re in the most connected period in human history, and the experience economy is very much a shared economy that connects us all.

What does this mean for the built environment?

Is this the end of the Australian dream as we know it? Perhaps owning a home is no longer relevant. Not only does the current market make it very difficult, younger generations simply don’t value ownership as much.

“Sydney millennials have basically given up on the possibility of even owning a house,” says Jason. “It’s just out of their reach.”

“And I guess one of the things that’s happening is we’re seeing that there’s less and less focus on ownership and more on investing in memorable experiences, which means fewer people are buying places to live,” adds David.

Perhaps the upside is that, with a smaller focus on Stuff, the possibility is there to create smaller living spaces that make sense to people. If the experience economy points towards people living their lives outside of home, then home may become simply a place to sleep, with little need for a kitchen and possibly for living space. This is a double-edged sword: it may contribute towards affordability but on the other hand it is likely to contribute towards totally homogenised communities with little-to-no opportunity for population diversity. This runs the risk of creating ghettos – according to the true definition of a ghetto as a monocultural community (rather than the less savoury definition of a slum). It also risks the obvious issues of people having to move when a person becomes a couple becomes a family – the notion of “aging in place” becomes impossible.

What does that imply for life with children, or even multi-generational families? Are we looking at a world where the majority of the world’s families will travel the world in future versions of RVs? Instead of flying cars, will we be looking at flying caravans? Already Walmart provides overnight parking for RVs – the company understands its customer, understands the value of the grey economy. For a substantial percentage of our population, will the future consist of living in the parking lots of retail centres? It’s an interesting notion in a world where we are being tasked more and more to consider future uses for multi-deck carparks, future relevance of which is in question.**

Location, location, location. Trends show this is the number-one thing we care about – more than home ownership, if renting means we’re nearer the action. Therefore, it becomes all the more important that people are given an experience that makes them want to live in a place.

“That experience can be multi-stranded,” says David. “It can be about nightlife, education, community, it can even be about great dining options. It doesn’t have to be much, but there has to be something that draws people to a place.”

A focus on the retail experience

Traditionally, the Experience vs Stuff paradox plays against retail, which is thought to be all about buying products. Not anymore.

“Nowadays, everything is about providing the shopper a memorable experience, otherwise they may as well shop online,” says David.

This is a major focus for the retail sector. Online retail was smugly heralded as “the death of the shopping mall”, yet a successful modern mall is as busy and as profitable as ever, if not actually performing better. It comes down to understanding the experience economy and responding to what it means for a modern tenancy mix. Malls in the USA are (in unusual situations) approaching a mix that is 50 per cent entertainment and dining.

More and more, this fundamental shift in what we seek is spreading around the world. An increasing number of young people in China, who only a few years ago would have been spending their discretionary income on luxury goods, are choosing to spend it on experiential travel instead. This represents a marked change in spending attitudes in what will shortly be (if it isn’t already) the world’s largest economy.

The experience economy is also about place – that now hackneyed “Instagram moment”. People have more choice than ever as to where they spend their very limited free time and the traditional white spaceship in a sea of asphalt isn’t going to cut it with this generation, even less so in future.

A desk is a desk. It is no longer critical to have your desk, something that’s particularly true for co-working spaces. In tropical destinations like Bali and Thailand, the phenomenon of the roaming worker is on the rise. Collaborative workplaces are popping up everywhere, with people packing up a couple of t-shirts and a laptop and working by the beach. That’s actually all they need to get by. Extrapolate this into the future: does the next generation apply the same logic to where they live? Do you really need a base? Why live in one location - if your work can be done anywhere, does your choice of where to live involve following the sun? Do you live in Palm Cove from September until February, then Barcelona from March until August? Do you chase the snow around the world as seasons change?

What is the implication for property values? Do less desirable places to live plummet in worth? Do tropical countries, Bali and Thailand spiral out of control? What does it mean for sustainability in these environments, which are usually underdeveloped and with infrastructure poorly equipped to cope with massive influxes of itinerants to their already large tourist population?

Greater use of public transport

The combination of living near the action and no longer spending money on a flashy car facilitates a greater uptake of public transport. That said, owning a car in Australia is still very common, due to our tendency towards urban sprawl. Therefore any increase in uptake would still need to be encouraged by building greater efficiencies in the public transport system itself.

Public transport needs a considerable rethink. The Australian preference for cars is justifiable in a variety of ways, including the (usually false) impression that you are in better charge of your time, and that you have comfort and safety in an environment that is familiar and under your own control. Most public transport in Australia does little to tick these same boxes; how often does it run on time, or at least often enough that missing your bus doesn’t mean an hour’s wait in an uncomfortable (or non-existent shelter (with no free wifi – the very notion of that is a relatively new phenomenon for Australians)?

Should public transport actually be free? Do the savings made by not building roads, and the released value in that land, compensate for the dubious profit to be made from inefficient ticketing and revenue collection?

A climb in tourism

The ultimate experience is travelling to a new destination. Discovering a new culture, eating new food and observing a new lifestyle are all very thrilling.

“It’s no longer about how flashy your car is,” says Jason, “it’s about whether you’ve climbed mountains in Nepal.”

In an increasingly globalised world, with shortened flight times and cheaper travel, more and more of us are saving our big splurge for a holiday. You can expect more hotels, more airports and other types of infrastructure to support this; we can only hope that the concomitant need to address the pressure on sensitive natural environments and inadequate infrastructure will be taken into consideration.

So, is spending on experiences the key to unlocking happiness? Unfortunately, the answer is not that simple, but as the research shows, it does add to our identity and sense of connectedness, more so than spending on products. While it is arguably too early to predict where this shift might lead, the flow-on effects are potentially bountiful for the built environment, with an increase in infrastructure set to support our search for experiences. 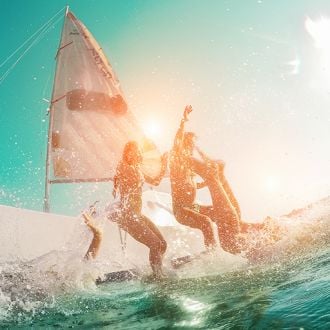