Finding the way to better wayfinding

In his 1960 book The Image of the City, urban theorist Kevin Lynch concluded that wayfinding was unlikely to be the result of any “mystic instinct”. “Rather there is a consistent use and organization of definite sensory cues from the external environment,” he wrote. “This organization is fundamental to the efficiency and to the very survival of free-moving life.”

In the decades since, wayfinding in the architectural realm has evolved to encompass a combination of elements including visual graphics, tactility and materiality, interactivity, and animated and audio-visual installations. And with technology advancing apace, we can look forward to a future where the wayfinding toolkit also includes holographic displays and augmented and virtual reality.

The psychological impacts of effective wayfinding are as diverse as the buildings and spaces in which the physical signage is placed, and Hames Sharley’s diverse portfolio structure recognises the demand for a multi-layered approach. Hospitals, educational establishments, transport hubs, sporting arenas and workplaces all have different core requirements that are reflected through their response to wayfinding. Perhaps no sector is more complex in its requirements, however, than retail.

Navigating a shopping centre requires multi-faceted perception. We continually process information on a subconscious level, and use that information to plan our next movements; it’s an extremely complex process determined by our spatial knowledge of our surroundings. Our brains constantly recognise and recall objects in specific locations, and then sequence them as we move through a space. We automatically construct mental patterns of our environment, and this is vital if we are to accomplish our objective of reaching a destination. The role of the environmental graphic designer within the retail sector is to positively influence that cognitive mapping.

Done correctly, retail wayfinding is driven by analysis of context, which sets it apart from other wayfinding processes. Successful and established retail centres and placemakers are inclined to maintain statistical data through which they investigate constantly innovative approaches to attract customers, increase spending and facilitate a positive customer experience. Wise use of this data can therefore result in returning custom and increased brand loyalty; however, a balance must be sought to maintain proven practices of merchandising, promotion and customer experience. The most successful retailers find an equilibrium between the traditional and innovative, melding digital technology and modern production techniques with more conventional practices.

Shopping can be regarded as a cognitive science in which spending patterns are enhanced by positively influencing the physical setting through the placement of displays, arrangement of stores and use of signage.

The essence of effective retail wayfinding design therefore addresses two key factors. First, to guide the consumer towards what they originally set out to find; second (and equally importantly) to guide the consumer to what the retailer wants them to find. When executed properly, both principles deliver a positive human experience, whereby the manipulation of the customer remains on a subconscious level.

To fully realise an effective wayfinding scheme, such strategic planning should be considered from the outset, and wherever possible at the initial architectural phase. As a multi-disciplinary design practice, Hames Sharley benefits from the opportunity to consider this fine grain when formulating the initial building-design response or, in many cases, the original master-planning.

In the main, food and beverage facilities, supermarkets, smaller retail units and departments stores have employed analogous planning methods for more than a century. The grid-based layouts of post-war shopping centres are still commonplace, with small adjustments to accommodate subtle cultural changes. Since the late 1990s, however, an increasing number of centres have broken from traditional store-layout models – to support this, they have come to redefine wayfinding.

One example of such innovation is the use of hierarchical layouts to visually separate a place into constituents, from large departments to the specific brands contained within them. This practice began as a vertical separation of spaces that catered for different demographics but has evolved to a more complex mix of offerings across both the vertical and horizontal.

With such increased complexity comes a need for clearer and more legible wayfinding. A key consideration here is to ensure that the designer has a comprehensive understanding of viewing corridors within the space. An intimate understanding of the architectural plans, coupled with the use of modelling software or exposure to virtual-reality environments, can dictate subtle differences in approach. Scale, contrast, illumination and quantity of content should all be informed by a deep understanding of the immediate environment around the signage, as well as its place within the wider context of a centre.

While an understanding between the environmental graphic designer and the architect is important to establish a true connection to the space, a similar understanding with the interior designer is equally vital. Sensitivity to the materials used within a space is essential for in-store wayfinding programs – a responsive and measured selection process should be applied so that materials allow a high level of visibility and legibility without diminishing the visual appeal of the interior design offering.

In the increasingly competitive retail marketplace, the aesthetics and functionality of wayfinding signage has, by necessity, evolved towards a stronger brand focus – whether that be branding elements associated with the centre as a whole or the individual retailers housed within. The physical spaces in which retailers exist remain the key drivers of their brand integrity, and each opportunity to display a brand name or icon must be seen as an opportunity to elevate the perception of the business.

The most important aspect of any wayfinding system, however, is functionality, and clarity of message is its greatest facet. Selecting fonts has a significant impact on the clear interpretation signage. Not only must a font set be highly legible and reinforce the brand, it also needs to set a consistent tone throughout a space. Extremely flexible, clean and simple san serif font families are those most commonly used in retail wayfinding – it is relatively uncommon for the number of words on a sign to justify serifs, which are designed to lead the eye from word to word.

By using a diverse range of font sizes and weights within a family, an information hierarchy can be achieved. This results in the audience instinctively and instantaneously processing information that would otherwise rely on them reading each line and each word of text.

In a multi-cultural, multi-lingual society, iconography can be preferential to words. The earliest, highly recognisable pictograms in the retail sector included basic directional notices; this then expanded to include signs pointing towards amenities and emergency access. As with any language, as time passed the vocabulary of commonly understood meanings grew, and this allowed environmental graphic designers to draw from a much broader palette. In the past decade, globally accepted symbols for technology such as wi-fi zones and charging stations have become easily recognisable and are now expected in any busy retail environment.

Digital retail technology has developed into a multi-billion dollar industry that has impacted upon every aspect of the commercial marketing experience. The most innovative retailers have created the means to link online purchases with the movement of products in store as a single seamless system. The next evolution of the technological retail experience will allow wayfinding systems to adapt to changing conditions by becoming digitally responsive.

The revolution in responsive retail signage began in car parks, where drivers were made aware of which direction to turn to find an empty bay. This was necessitated by the need to get people to parking spots quickly and efficiently – that way, their dwell time within stores could be increased and their overall experience could be improved.

These innovations are now moving inside the centres themselves in myriad different ways. If a centre is home to stores with different opening hours, signage can cater for this by changing when a specific shop lowers its shutters. If a portion of a centre is given over to pop-up shops or seasonal tenants, they can still be included within a wayfinding scheme that can change at a moment’s notice. And financially speaking, the growth of responsive wayfinding content will allow retailers to truly realise the value of engaging digital investments. No longer are they just functional requirements but true value-adds that increases enjoyment and profitability.

With mobile phones and tablets becoming ubiquitous, there is also an increasing acceptance that an individual’s own handheld device will be the platform on which modes of wayfinding may be viewed. Outside of the retail sector, several airlines now expect travellers to access inflight movies and entertainment by downloading viewing apps onto their own devices, rather than using screens built into seat backs. Across all facets of modern life, information is finding its way into the hands of the end user in this way, and the retail sector will be no different. 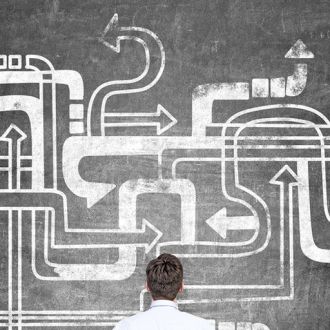