Why the new bike path in Frome Street, Adelaide, is great for motorists as well as cyclists

A new 1.6km bike path running north-south up the side of the city on Frome Street has sparked a lot of debate. Motorists and cyclists have been pitted against each other in media reports and there are even calls for the new bike path in Frome Street to be ripped up.

The outpouring comes at a sensitive time, as the city this week is hosting Velo-City Global 2014, a series of cycle planning conferences involving hundreds of delegates from all over the world discussing how to create cities and places that embrace bike riding as part of daily transport.

The Frome Street bike path was clearly flagged in the council’s 2012 transport strategy, Smart Move. In it, planners predicted Adelaide would have an additional 100,000 people travelling into the city every day within 30 years, (a 42% increase from 2012, according to the council’s report).

The council’s website explains its reasons: “To accommodate this forecast growth it is important that we seek sustainable transport outcomes for the City; outcomes that rely less on a single mode of transport and that adopt a balanced approach to how we travel. Smart Move, the City of Adelaide’s Transport and Movement Strategy 2012-22, outlines this approach and aims, not only to promote walking, cycling and public transport, but also to optimise the existing road space and, the extensive number of car parking spaces in the City. A balanced approach to transport will encourage those who are able to switch to public transport, cycling and walking. This will alleviate traffic on the roads for the people who cannot easily use public transport, walk or cycle.”

What the motorist lobby wants

Some opponents of the Frome St separated bike lane have called for it to be removed and for a moratorium that allows time for discussion of the transport plans.

There is a precedent for such a radical move – a first attempt by the council to install a separated bike lane in the city’s Sturt Street was taken out at a cost of over $400,000.

Supporters say the plan to diversify transport options is an excellent one and supported by global research. One such is Dr Jennifer Bonham, who is a senior lecturer and co-convenor at the University of Adelaide’s Master of Planning, Geography, Environment and Population Bonham, whose primary area of research is sustainable transport, says the mix of parking, footpaths, bike paths and roadway is the result of the council’s community consultation.
“Local businesses and residences wanted to see parking retained, so they took out a lane of motor vehicle traffic,” she says.

Bonham says relatively few cars used the street – under 10,000 a day and the transport plan is to calm traffic and make the area more liveable. “It’s about making it friendlier, and more attractive.”

The missing elements of the debate

The Frome Street bike path, which runs from the South Park Lands to Pirie Street, will eventually be part of a ’Safe Cycling’ bike path network, and extended along the CBD’s Fitzroy Terrace to create the first continuous bike route through the city in the north-south direction, according to the council’s plan.

Bonham says because drivers have been pitted against cyclists in the debate, Adelaide is missing the opportunity for a bigger debate about how transport affects liveability, community health and even gender issues.

Bonham says women are more likely to ride bikes if cycle paths are provided than if they have to battle for space on the roads. “For cyclists who really hate having to deal with traffic, or just don’t want the stress, or for new cyclists, Frome Street is a convenient route.”

She says it is also a way to encourage all Adelaide residents to improve their health. “Cyclists are growing in numbers, and will continue to grow, and we have lost the discussion about how that can best be facilitated, and how to keep people safe, and what kind of education we need for all transport users, and what kind of infrastructure works best for the entire city.”

Hames Sharley director, David Cooke, took the unusual step to write to the editor of the Adelaide Advertiser to show his support.

I’m writing to express my support for the new Frome Street bike lanes and to provide some very good reasons why I believe it will make a positive contribution to our city and we should all get behind this initiative.

First, a declaration – I’m an architect with a strong personal and professional interest in urban design. In my view, it’s important for professionals in the field to speak up and bring our knowledge and research to such community debates.

Another declaration – I’m a cyclist. But like most cyclists, I also drive a car, and I don’t like traffic congestion any more than the next driver. So it is from that point of view that I make my first point.

Yes, Frome Street has become a battleground for a debate between car drivers and cyclists – an embarrassing battleground as we host the Velo-Cities Global 2014 conference celebrating cycling. But I think there is good evidence that our city’s transport strategy, of which a bike path network is an important element, is worth supporting.
Over time, like the tram extension, we will wonder why we didn’t do this sooner.

David is practice director of Hames Sharley’s Adelaide office and holds multiple national portfolio leadership roles within the company. David is a registered architect in many states and territories within Australia and has lead architecture, urban design and interior design projects, both large and small for public and private sector based clients. He is a passionate communicator and enjoys all levels of collaboration involved in design projects. David has been a board member of the Rundle Mall Management Authority since 2012, a panel member of the City of Prospect’s Development Assessment Panel since 2011 and recently appointed to the Inner Metropolitan Development Assessment Committee. He also holds positions on the executive committee of Mainstreet SA and has been treasurer of the Property Council of Australia SA Division since 2011. 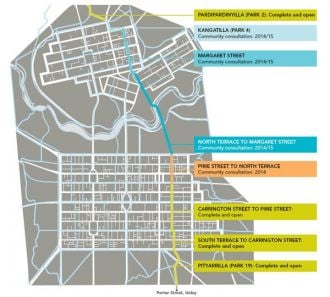