Record crowds of over 125,000 people are set to embark on Adelaide Oval this weekend, packing out the city stadium for its second three-day Commonwealth Bank day-night Test, between Australia and South Africa.

Marking the beginning of the cricket season, and for many Adelaidians, the “silly season”, the Test – which is the only day/night competition of its kind in the world – is a significant nod from Cricket Australia to the small yet historically significant cricket loving city of Adelaide, and its Colosseum.

But none of this would have been possible without the bold decision of the State Government to invest in the world-class refurbishment of Adelaide Oval – where never before has the adage “build it and they will come” been more appropriate.

The initially controversial decision to update the historic landmark has resulted in an influx of locals and visitors flooding to the city centre – from Adelaide’s outer suburbs, regional SA, interstate and overseas – attending everything from AFL finals and Socceroo’s matches, to major concert events including the Rolling Stones to ACDC.

The National Visitor Survey results from 2014 indicated that football attendance at Adelaide Oval alone injected an extra $240 million into the State’s economy, in its first season.

“Results show visitors from around Australia spent $4.55 billion in SA during the 12 months to September - a 5.6 percent increase on the previous year,” AdelaideNow reported.

“The increase was well above the average increase in domestic visitors in other states of 1.8 percent.

“The results come a week after figures showed record numbers of 390,000 international visitors came to SA for the 12 months to September.”

But this was no surprise for the State Government, who sank $535 million into the construction of Adelaide Oval as a strategic move to boost tourism and encourage locals to congregate in the city.

In a recent media release the Premier of South Australia, Jay Weatherill, announced that the Adelaide Oval redevelopment had generated “hundreds of millions of dollars in economic benefits” and jobs in South Australia since reopening in 2014, showing the “overwhelming success of the revitalised stadium” in its first two years.

“The redeveloped Adelaide Oval has become the centrepiece of the revitalisation of our city,” Mr Weatherill said.

“What’s more…economic activity is conservatively estimated to have created the equivalent of about 700 jobs in the city, generating wages and business incomes of $158 million.”

But in spite of initial criticism causing a divide between traditionalists and innovators – the real winner of the project has been collaboration.

From the State Government’s pledge for funding and the establishment of the Adelaide Oval Stadium Management Authority (a joint venture of SACA and the SANFL); to the coming together of a master builder, and three of Adelaide’s top architectural firms – the project from day-one was inspired by, funded, and built through strong interdisciplinary and industry partnerships.

Even when it came to the design of the oval, bringing together functional expectations and heritage concerns in a cohesive way was a major challenge for Cox Architecture in association with Walter Brooke and Hames Sharley, who worked in partnership with Baulderstone Pty Ltd (now Lend Lease) to redevelop the iconic stadium.

Caillin Howard, Managing Director at Hames Sharley said that working together with Cox Architecture in association with Walter Brooke on Adelaide Oval was an opportunity that each firm embraced openly and collaboratively, with the results clearly indicating the success of the partnership.

“Due to the sheer scale of the project – it just wouldn’t have been achievable for one firm to do it solo.

“By coming together we were able to bring our diverse skills and perspectives to the project to make it a success – when you work collaboratively it gives you more strength and a greater depth of knowledge to draw on and the results are a testament to this way of working.”

All three firms were ultimately honoured in 2015 for their contribution to the design of Adelaide Oval, winning the Australian Institute of Architects’ prestigious National Award for Public Architecture.

Adelaide Oval SMA CEO Andrew Daniels paid tribute to the collaborative design in a statement on the Oval’s website.

“It’s not enough to say that the work done by Cox Architecture, Walter Brooke and Hames Sharley is world class,” Mr Daniels said.

“That’s obvious to anyone who has visited the Adelaide Oval over the past two years.

“What has been recognised with this award is that they have created a piece of public infrastructure that is both aesthetically and functionally brilliant – both awe-inspiring and accessible.

“That is a remarkable achievement and one of which all South Australians can be incredibly proud.” 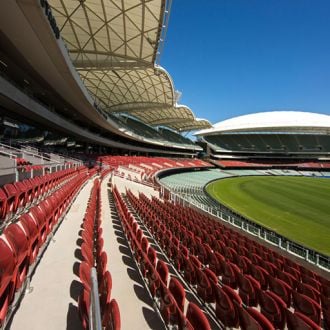